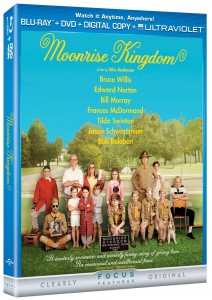 Wes Anderson is back to the live action format with his new quirky coming of age film, Moonrise Kingdom.  I can always tell a Wes Anderson film from any other films.  The camera angles, the oddball characters, the musical cues with the slow-motion action, and how every character puts their emotions on the frontline makes up the guts and glory of a Wes Anderson film.  Some people might find all this obnoxious, but Moonrise Kingdom, with its two tween stars, everything seems to work flawlessly.

I don’t know Wes Anderson personally, but I really think the kid character in the film, Sam Shakusky could have been Wes Anderson growing up.  After all, I think Anderson is still a kid at heart trapped inside a brilliant adult filmmaker’s body.  The way he tells his stories are so whimsical and full of youthful adventures and romance.  Moonrise Kingdom shows us, just that, and this time with actual kids, rather than Anderson’s previous films.  If you aren’t already a fan of Wes Anderson’s world by now, after viewing Moonrise Kingdom, you will be.

Moonrise Kingdom starts out much like the rest of his films with a narrator telling us where we are and setting us up for the story by introducing locations and characters.  We find out we are on a very small island near the New England states with a very large and destructive storm nearing the island.  The film follows the young Sam Shakusky (newcomer Jared Gilman), who is has quit his Scout Troop due to the other scouts tormenting him and escaped to live in the woods. We find out that this escape was planned from months ago with his young sweetheart girlfriend, Suzy Bishop (newcomer Kara Hayward).  Suzy and Sam are both loners and oddballs who have been writing letters of their love for one another and their escape to live together for some time. Their letters to each other give us their personal details of their sordid lives and their desire to live with each other away from the island.

The two meet at their secret location described in their letters and they set out to live in the wilderness armed with food, binoculars, sci-fi books, a French pop record, a pet cat, and a pair of scissors.  Sam is an exceptional scout and shows us he has great knowledge of camping and providing food and shelter for his one true soul mate, while Suzy stands by her beau no matter the cost.  The two lovebirds are pursued by Randy (Edward Norton), the leader of the Scout Troop and the rest of the scouts, Captain Sharp (Bruce Willis), who is seemingly the only law enforcement on the island, and Suzy’s dejected and miserable parents, Walt (Billy Murray) and Laura who are both lawyers and unfaithful to each other.

Every character is unique  with Norton playing a nerdy and funny scout leader who is in over his head when his Scout Troop falls apart.  We see his character overcome his foolishness and self doubt to become the leader he was born to be.  Norton, of course does an exception acting job.  Willis’s Captain Sharp is much like Sam in that they’re both in love with people at the wrong time, and we see both of their similar suffering.  It’s a good bond between the two.  Gilman and Hayward really shine in Moonrise Kingdom.  Much like Anderson’s previous main characters, Sam and Suzy declare their love with so much passion and are pleased to show it, even with that famous Anderson philosophical soft dialogue.

Wes Anderson once again has brought us in a very distinct and idiosyncratic world with his visual wit and flawless production and set design.  Every scene and piece of dialogue is as important as the entire story, while the music and hidden gems are placed throughout the film perfectly.  Moonrise Kingdom is an exquisitely sculpted film about an unconventional  yet very charming and delightful love between two young teens.  Moonrise Kingdom will have you begging for more and wanting to see it again and again for years to come. 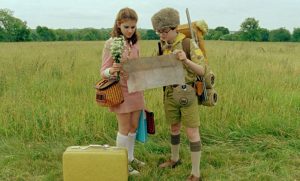 ‘Moonrise Kingdom’ comes with an unique and glorious 1080p HD transfer and is presented in 1.85:1 aspect ratio.  You might be surprised to hear that Wes Anderson filmed ‘Moonrise Kingdom’ on 16mm film, which gave it the look of a fairy tale of sorts.  That being said, the film looks amazing in HD.  Being shot on 16mm, the film has a softened look with darker and a greyish tone to them.  The colors seem to consist of mostly browns, yellows, dark greens, and greys, but with Anderson’s artistic eye, everything pops vibrantly.  The detail isn’t as good as we would expect on a new sci-fi release and the film has a layer of grain, but that is all what Anderson was trying to convey on film.  it’s all part of the experience.  A lot of the scenes at night aren’t as sharp as the daytime scenes due to the grain, but the detail doesn’t seem to be hindered.  I did not notice any aliasing or halos during the film.  Overall, this is a great filmic looking movie, something we don’t see too often in HD, and it looks clear and beautiful.

The audio has an impressive lossless DTS-HD 5.1 audio mix and sounds great.  This is a dialogue drive film, much like all of the other Anderson films, but there is plenty of ambient noises, and sound effects too.  The dialogue is crystal clear and is perfectly situated on the fronts and very easy to understand.  If a character is talking off screen, it comes through nicely on the surrounds.  The sound effects are amazing, especially the big thunderstorm, which gives the full set of speakers a quick workout along with the bass rumbling.  Since a lot of this movie takes place in a very rural setting, there are tons of ambient sounds of insects, wind, and other nature sounds that come across nicely on the rears.  It’s as almost you’re in the forest as well.  The score and music is amazing and never drowns out the sound effects or the dialogue.  I actually own the vinyl to this, and I suggest you pick up the soundtrack as well.  You won’t be disappointed. Solid audio presentation here. 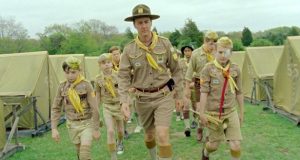 Wes Anderson’s ‘Moonrise Kingdom’ is one of the better films of the year.  The cast and dialogue in the film are top notch and you will leave this film wanting more.  the audio and video presentations are magical and take you back to a filmic time.  However, the extras are less than desired, but as history has shown, most all of Anderson’s films end up at Criterion, so here’s hoping this gem of a film ends up over there with tons of amazing extras.  Until then, I highly recommend picking this up.  Highly Recommended.