One of my Favorite Documentaries, ‘The Staircase’ Returns With New Episodes!!! 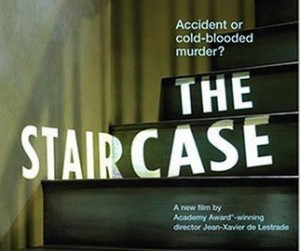 I’m so psyched about this.  My friend and fellow Boomstick writer Justin Cline introduced me to this amazing documentary ‘The Staircase‘ almost a decade ago, and I have watched it several times through, showing my friends, which leads to many conversations of the justice system and the innocence or guilt of one man.  ‘The Staircase‘ was an eight-part documentary film that aired on the Sundance Channel several years ago and showcased a murder trial based in North Carolina, where a man was accused of murdering his wife.

The accused man is Michael Peterson, who allegedly and brutally killed his wife, however he claims that she just fell down the stairs at their home.  Throughout the documentary, each part has evidence proving his guilt and also his innocence, even to the very end, we are left up in arms as to whether or not Peterson committed the crime. To this day, Peterson’s lawyers are still trying to prove his innocence, according to PopCandy, and Sundance will be airing two all new parts to the epic and powerful documentary ‘The Staircase‘ in March.

Starting tonight, you can watch from the beginning, the entire 8 part series over the course of a few days on Sundance.  I can’t wait to see the new episodes.  Trust me on this, ‘The Staircase‘ is one hell of a documentary, and with each episode, you will go back and forth on what you believe.

Here is part 1 below:

2 thoughts on “One of my Favorite Documentaries, ‘The Staircase’ Returns With New Episodes!!!”