Leslye Headland’s ‘Bachelorette’ tries to combine ‘The Hangover’ and ‘Bridesmaids’ into a solid film.  But, with its characters, who I’d rather see pushed out of an airplane at 30,000 feet without a parachute then watch another minute of them on screen, really soured this film’s potential.  ‘Bachelorette’ was originally an off-Broadway play by Headland, who subsequently wrote and directed the film adaptation you see now.  This whole story and cast looks great on paper, however these characters are just terrible people, who really have no redeeming qualities to make you feel good about them or good about yourself watching the film.  And after the whole film shows that these characters are miserable people, the last two minutes of the film tries to wrap everything up in a cozy happy little ball with our four main actresses dancing like nothing happened.  It makes no sense.

We first meet the bride-to-be Becky, a fun loving bigger girl (Rebel Wilson from ‘Bridesmaids) and her best friend Regan, an uptight, frigid business woman (Kirsten Dunst) sitting down for lunch as Regan orders a cobb salad and informs the server to hold everything but the lettuce, whereas Becky orders a greasy burger and fries.  Instant friends, right?  Becky informs Regan that she was just proposed to by the man of her dreams, Dale (Hayes MacArthur).  Immediately, we see Regan’s face show no happiness for her friend, but anger as to how her large friend is getting married before her or their other friends. 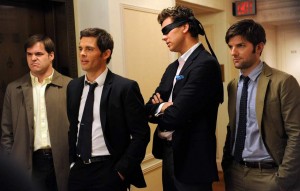 We then meet the two other friends, Katie, a ditzy, cocaine addicted retail employee (Isla Fisher) and Gena, a chimney smoking, out-of-work, girl (Lizzy Caplan), who were all friends in high school and all resorted to calling their own friend Becky, Pig-Face.  They really don’t seem like friends at all.  These girls are not above doing line after line of cocaine, stealing money from people, or making fun of Becky behind her back for being big.  As their bachelorette party is just getting started, Gena and Katie accidentally rip Becky’s wedding dress, which the wedding is just a mere few hours away.  This doesn’t make sense as to why Becky is even friends with these horrible girls on any level.

From here on out, Katie, Gena, and Regan mix partying and trying to get Becky’s wedding dress fixed.  The usual vomit, penis, semen, and sex jokes ensue throughout most of the film.  It’s nothing new and has all been seen and heard before, but by better and more likable characters.  All the guys in the film take a big back seat in the film with hints of a story line to all of them, but nothing ever pans out or receives the attention it deserves.  And the male casting was great which includes Horatio Sans, James Marsden, Kyle Bornheimer, and Adam Scott (who starred with Caplan on the hilarious series ‘Party Down’). 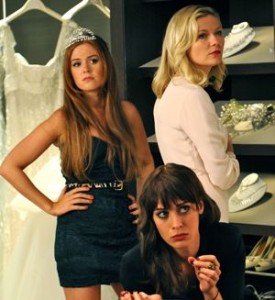 Headland did strive for a Palladino-esque (‘Gilmore Girls’) rapid fire dialogue film between the girls.  Some of it is funny, but most of it comes across cheap, dull, and unfunny.  My favorite part of ‘The Bachelorette’ was Lizzy Caplan.  Although, her character sucks, her dialogue was by far the funniest, as she talks bluntly about her hypothetical sexual experiences.

This film could have been so much better and a thousand times more likable.  With ‘Bridesmaids’, all the females were likable and redeemable.  You actually enjoyed being with them for the two plus hours.  However, for some reason I don’t know, Headland wanted you to hate all these characters in ‘Bachelorette’, and that is what ultimately made this film a huge disappointment.  I would imagine some women would find the last scene prior to the wedding, a funny scene if you have ever been a bridesmaid who has tried to get things perfect and ready for the bride, but when you have characters as unlikable as these, you’ll leave the theatre fully unsatisfied. I really wanted to enjoy this, but unfortunately that wasn’t the case.  It’s okay to skip this film.  You’re not missing anything.