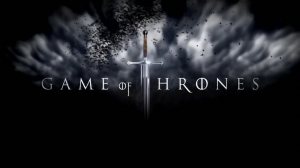 Dark Horse has teamed up with HBO and ‘Game of Thrones’ to release a few items from the epic series.  One is a ten inch statue of Tyrion Lannister, played by the amazing Peter Dinklage.  The other, is a replica of the actual Iron Throne.  Looks like they did a pretty good job on the Lannister statue.  This statue is a limited edition and won’t be available for purchase until February.  The Tyrion statue will retail at around $199.99. 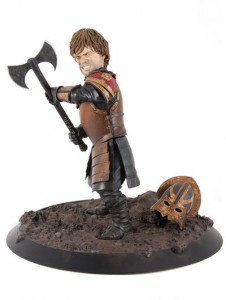 When Dark Horse began developing a line of collectible sculptural pieces based on HBO’s Game of Thrones, we discovered that we had the full attention of all involved in the production.

In looking for the best subject matter from the then-unseen season 2, we asked producer/writers David Benioff and D. B. Weiss, “What is the most ‘statue-worthy’ moment in season 2?”

The answer was the moment when Tyrion, as portrayed by Peter Dinklage, charges into battle, leading the defense of King’s Landing against an assault by King Stannis Baratheon in the Battle of the Blackwater. They further assisted with special photographic reference taken during filming, expressly as sculpture reference for this piece, which we proudly offer for advance order.

Then there is the Iron Throne replica which stands at about 14 inches tall and is limited to only 750 pieces worldwide.

The most iconic image in the acclaimed HBO series Game of Thrones is, of course, the titular Iron Throne itself. It is located in the Red Keep in the city of King’s Landing. When they say, “Win or die,” this is what they are talking about. When King Aegon the Conqueror forged it, the swords of all the hundreds of lords who surrendered to him and offered him fealty were melted down into a throne of imposing size and appearance.

Dark Horse Deluxe, working with HBO Licensing and the talented artisans at Gentle Giant Studios, have replicated the throne prop from the series. Not a single sword has been overlooked, in either sculpture or paint application.