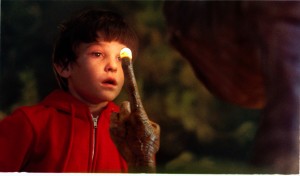 That’s right, folks.  ‘E.T.’ will be on the big screen again, thanks to Turner Classic Movies and Fathom Events.  Screening will take place October 3rd at 7:00pm at select theaters across the country.  This marks the 30th anniversary of the film and most likely is geared to promote the new blu-ray coming out as well.  This was one of the first films I saw in the theater and it just blew my mind.  It was one of the first times my Dad and I bonded over a film.  Needless to say it holds a special place in my heart.  Not only will you get a newly remastered version of the film, but also a journey of the making of ‘E.T.’.  And yes, folks, this is this original film, not the version with the extra scenes or the CGI’d walkie-talkie replacements.  Spielberg acknowledged his fuck-up long ago and apologized.  The same can’t be said for Lucas.  I’m super excited about this and hope all of you can make it and take your kids to see this on the big screen.  Official press release below.

This fall, movie theater audiences nationwide will “phone home” once again as Steven Spielberg’s beloved film “E.T. The Extra-Terrestrial” returns to the big screen in honor of its 30th Anniversary. “TCM Presents ‘E.T. The Extra-Terrestrial’ 30th Anniversary Event” will take place Wednesday, October 3 at 7:00 p.m. local time, with special matinee screenings in select theaters at 2:00 p.m. local time. Presented by NCM® Fathom Events, Turner Classic Movies (TCM) and Universal Pictures as part of the studio’s 100th Anniversary celebration, the event features the all-new, digitally remastered feature film, as well as a special taped introduction by TCM host Ben Mankiewicz, who will take audiences through the making of this modern classic. Fans will discover how Spielberg came up with the idea for “E.T.” and learn what working on the film was like for the film’s three young stars. As an added treat, Drew Barrymore, who plays Gertie in the film and who currently co-hosts TCM’s “The Essentials” showcase, shares what the film means to her 30 years later.

Tickets for “TCM Presents ‘E.T. The Extra-Terrestrial’ 30th Anniversary Event” are available now at participating theater box offices and online at www.FathomEvents.com. The event will be presented using new digital cinema projection systems in more than 560 select movie theaters around the country. For a complete list of theater locations and prices, visit the NCM Fathom Events website (theaters and participants are subject to change). 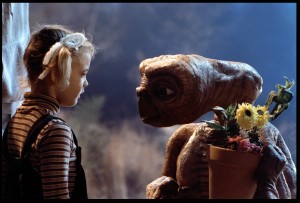 “E.T. The Extra-Terrestrial” stars Henry Thomas as Elliott, an imaginative boy who meets a lost alien and forges of one of cinema’s most endearing friendships. With help from his older brother, Michael (Robert MacNaughton), and little sister, Gertie (Barrymore), Elliott sets out to help the visitor find his way back home before government agents can capture him. Dee Wallace and Peter Coyote co-star.

“Thirty years ago, Steven Spielberg introduced the world to E.T. – the alien who stole our hearts with a timeless and endearing story about friendship and courage,” said Shelly Maxwell, executive vice president of NCM Fathom Events. “Together with TCM and Universal Pictures, Fathom Events invites audiences – young and old – to experience the magic of ‘E.T.’ once again in movie theaters.”

Universal Studios Home Entertainment will celebrate the 30th anniversary of “E.T. The Extra- Terrestrial” with the film’s Blu-ray™ release on Tuesday, October 9. Featuring an all-new, digitally remastered picture, as well as all-new 7.1 surround sound, the “E.T. The Extra-Terrestrial” Anniversary Edition Blu-ray™ Combo Pack includes the 1982 theatrical movie, an all-new interview with Spielberg, and “The E.T. Journals,” featuring never-before-seen footage from the set of the film.