Check Out the Trailer for ‘Zero Dark Thirty’!!! 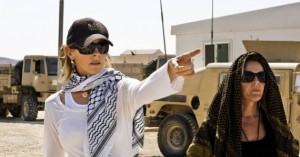 Remember when President Obama sent in the Navy Seal team to kill Osama Bin Laden?  And remember there were several directors that wanted to make a big Hollywood movie about that secret operation?  We now have a trailer from one of those films.  This one is called ‘Zero Dark Thirty’ and is directed by the Oscar winning Kathryn Bigelow, who directed the Oscar winning film, ‘The Hurt Locker’.

‘Zero Dark Thirty’ is the story of the Navy Seal Team 6′s hunt for Osama Bin Laden, which ended on May 2, 2011 with the terrorist leader’s death. Mark Boal penned the script, who also wrote ‘The Hurt Locker’. The film, starring Jessica Chastain, Chris Pratt and Joel Edgerton, is scheduled for release on December 19.