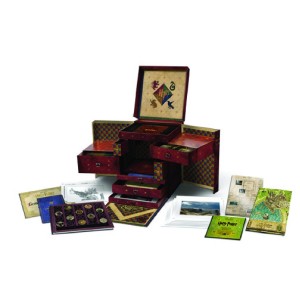 Warner Bros. is gearing up their ultimate blu-ray box set of the Harry Potter series.  Much like their first one they did which included the first five films, plus a Harry Potter DVD game Hogwarts Challenge,  2 hours of enhanced content, a “Harry Potter’s Bookmark Collection”, and collectible trading cards; this set is  will contain all of the films and much much more.  The set will be released September 7th, 2012.

This new set will contain a whopping 31 discs including the 3D versions.  In addition to that, it will house every single extra that was on any of the previous discs.  There will also be at least 5 hours of new never before seen content.  The box sets will be limited and numbered.  New content includes: The Harry Potters You Never Met; Creating the World of Harry Potter, Pt. 7: Story; Creating the World of Harry Potter, Pt. 8: Growing Up; Extended version of the Conversation with J.K. Rowling and Daniel Radcliffe; and exclusive memorabilia including a Map of Hogwarts, concept art prints, catalogs of props and posters, all designed by the graphic designers from the films.

The price for this ultimate Wizard Collection Blu-ray set is expensive.  $499.99 expensive.  Right now over at AMAZON.COM, the set is $349.99.  I’m sure it will go down even more prior to release, but the set itself looks AWESOME.

This new limited and numbered 31-disc collection contains all eight Harry Potter movies on
Blu-ray, DVD and UltraViolet Digital Copy and more than 37 hours of special features including all previously released materials and more than 10 hours of new to disc bonus content, and 5 hours of never-before-seen material.

Films Included in Collection – All on Blu-ray, DVD and UltraViolet Digital Copy