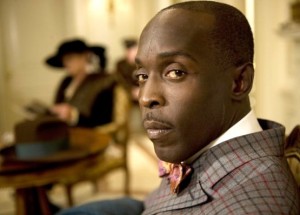 Based on a true story, DIRTY WHITE BOY chronicles the astounding rise of Jarred Weisfeld, a 22-year-old VH1-intern-turned-manager, and his misadventures with the legendary rapper leading up to the performer’s tragic death in 2004.

The project originated with Hagopian’s Ocean Size Pictures with the full support and co-operation of Weisfeld as well as Jones’ mother, Cherry Jones.

“We both knew full well who Ol’ Dirty Bastard was but this story completely floored us. As filmmakers, we knew that this would make a great film and that Jarred Weisfeld would offer an actor a complicated and compelling character to play,” said Knudsen and Van Hoy. “This felt to us like Risky Business and 8 Mile, with equal elements of darkness, humor, and humanity.”

“We are thrilled to have the genius of Joaquin Baca-Asay behind the camera, directing this incredibly original screenplay by Brent Hoff,” said Hagopian, “I know Michael K. Williams will leave audiences completely in awe as Russell Jones, the man behind the character ‘Ol’ Dirty Bastard.’”

Baca-Asay began his career as the Director of Photography on Dylan Kidd’s Roger Dodger, Mike Mills’ Thumbsucker, and James Gray’s We Own the Night and Two Lovers, as well as the comedy classic Super Troopers for Jay Chandrasekhar. He hasgone on to become a highly accomplished commercial director. Baca-Asay also won an MTV Video Award for his work on the video for Jay Z’s 99 Problems. He is repped by CAA.

Williams is well known for his role as Omar Little on The Wire, as well as Chalky White on Boardwalk Empire. He also appeared in John Hillcoat’s The Road, Todd Solondz’ Life During Wartime, and Antoine Fuqua’s Brooklyn’s Finest. Williams is repped by Sam Maydew and Matt Goldman at The Collective.

Hoff, the co-founder of Wholphin DVD, was recently awarded a Tribeca Sloan Grant as well as the 2011 FIND film grant, and Filmmaker Magazine named him one of “25 New Faces of independent Film” in 2012.

Ocean Size Pictures projects in development include the comedy “Tackling Larry Csonka” written by Chris Millis (“Small Apartments”), and “El Diablo Rojo!,” also written by Hoff, an action-adventure based on the true story of a giant squid infestation in the Sea of Cortez.