Find Out What Judd Apatow’s New HBO Series ‘Girls’ Is All About!!! 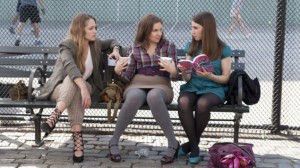 Hannah, Marnie, Jessa and Shoshanna are trying to figure life out.  They’ve been living in New York for a couple of years, but they’re still not sure what they want – from boys, from each other, from themselves.  And things aren’t getting any clearer.  Created by and starring Lena Dunham (“Tiny Furniture”), the new HBO series GIRLS takes a comic look at the assorted humiliations and rare triumphs of a group of girls in their early 20s.  Dunham, Judd Apatow and Jenni Konner executive produce the show, which kicks off its ten-episode season SUNDAY, APRIL 15 (10:30-11:00 p.m. ET/PT), exclusively on HBO.  Bruce Eric Kaplan and Ilene S. Landress co-executive produce.

Hannah (Lena Dunham) is a unique mixture of self-entitlement and self-loathing.  She believes she has the talent to be a successful writer, but forgets she has to write first.  She wants to have a boyfriend without the obligations of a relationship, and a job without having to work.  She’s ultimately good-natured, with a spirited sense of humor.  But every time Hannah is about to improve her circumstances, her cluelessness undercuts her.

Marnie (Allison Williams), Hannah’s roommate and best friend, is a Type A personality with strict rules about friendship.  She seems like Hannah’s opposite, because she’s got an actual job and a serious boyfriend.  But while she’s more together on the surface, her unwillingness to admit how lost she is may mean that she’s the most lost.

Jessa (Jemima Kirke) is a live-and-let-live bohemian who’s allergic to anything she views as bourgeois.  She wants a life less ordinary and has travelled extensively.  She’s had lots of different jobs and lots of different boyfriends, but her apparent lack of fear belies her own kind of insecurity.  Jessa is apt to put crazy ideas in Hannah’s head that are easier for a gorgeous British girl to pull off than they are for anxious, rumpled Hannah.

Shoshanna (Zosia Mamet), Jessa’s roommate and cousin, aspires to the “Sex and the City” lifestyle.  She’s an NYU student obsessed with “women’s issues,” gluten-free foods and sexcentric self-help.  The others tend to underestimate her because she’s suburban and innocent, but Shoshanna can be a surprisingly incisive source of wisdom.

Lena Dunham directed five of the ten episodes of GIRLS.  Other directors on the show include Jody Lee Lipes (cinematographer on “Martha Marcy May Marlene” and “Tiny Furniture”), Jesse Peretz (“Our Idiot Brother”) and Richard Shepard (“The Matador,” Emmy® winner for “Ugly Betty”).

In addition to Dunham, who wrote or co-wrote every episode of the show, writers on GIRLS include Judd Apatow (“Knocked Up”), Bruce Eric Kaplan (HBO’s “Six Feet Under”) and Jenni Konner (“Help Me Help You,” “In the Motherhood,” “Undeclared”).

Hannah (Lena Dunham), a 24-year-old aspiring writer living in New York City, is blindsided when her parents (Becky Ann Baker, Peter Scolari) cut her off financially.  Subsequently fired from her unpaid internship, she seeks comfort in Adam (Adam Driver), the eccentric actor she sometimes sleeps with when she can get him to respond to her texts.  Meanwhile, Hannah’s best friend and Type-A roommate, Marnie (Allison Williams), hosts a dinner party for their bohemian British friend Jessa (Jemima Kirke), who’s returned from god-knows-where to move in with Shoshanna (Zosia Mamet), Jessa’s younger, “Sex and the City”-obsessed cousin.  Written and directed by Lena Dunham.

Hannah reveals her “Forest Gump”-induced AIDS phobia when she realizes Adam might not be practicing monogamy.  Marnie lives in denial of her growing boredom with (and sexual repulsion by) her long-term boyfriend, Charlie (Chris Abbott); Jessa avoids Marnie’s meticulously planned day at a women’s health clinic, where Shoshanna confesses a humiliating secret.  Written and directed by Lena Dunham.

Episode #3:  “All Adventurous Women Do”

Hannah meets up with her erstwhile college flame to find out how she contracted HPV, uncovering much more in the process.  Marnie’s art-gallery boss introduces her to a cocky artist who piques her interest, while Jessa gets a babysitting gig.  Written and directed by Lena Dunham.

Executive producer Judd Apatow has extensive credits in both film and TV.  He produced the hit comedy film “Bridesmaids,” which received an AFI Award, as well as such films as “Get Him to the Greek” and “Forgetting Sarah Marshall,” and wrote and directed “The 40-Year-Old Virgin,” “Funny People” and “Knocked Up.”  Apatow executive produced the TV series “Freaks and Geeks” and “Undeclared,” won an Emmy® for his writing on “The Ben Stiller Show” and also wrote for the groundbreaking HBO series “The Larry Sanders Show.”

Executive producer Jenni Konner is a TV and feature film writer.  She co-created and executive produced the TV series “Help Me Help You” and “In the Motherhood,” and worked with Judd Apatow on the series “Undeclared.”