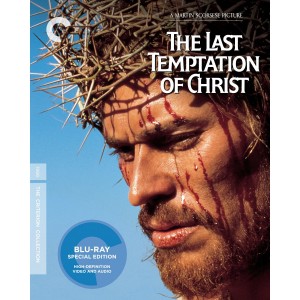 Martin Scorsese’s ‘The Last Temptation of Christ’ is a beautiful, creative, and unique look into the life of Jesus.  Criterion rolls out the red carpet again with this blu-ray version  with top of the line video and audio presentations, some decent extras, and one hell of a film.  This is spine #70 and I highly recommend this bluray.  Definitely worth the upgrade if you already have it.

Banned in quite a few places including some major U.S. retail chains, ‘The Last Temptation of Christ’ follows the story of Jesus Christ played by the amazing Willem Dafoe.  Quite a few people and critics took issue with this movie and developed a distaste for it.  Their main reason being that they didn’t like Scorsese’s vision of their savior.  More or less, Scorsese wanted to show a film about Christ as just an average man and how Jesus came to accept his role in history.  Don’t get me wrong, ‘The Last Temptation of Christ’ does not dispute that Christ was sort of an important factor of a major religion or that he was holy and performed miracles.  The films shows that and even takes notes from the big book itself.  But what Scorsese does brilliantly is show how this holy man is also human and just a regular guy.  I really like how Scorsese shows some of the most iconic scenes through the eyes of Jesus himself.  Of course, with any film about religion, people are going to get upset.  This is a work of fiction, by a celebrated director, and is done to perfection.  Harvey Keitel plays Judas to a tee.  He is my favorite character in the film.  So much depth.  Then there is Barbara Hershey as Magdalene who plays her so eloquently.  And don’t forget that Harry Dean Stanton and David Bowie is in the film.  Not too mention an unbelievable score by Peter Gabriel.  Much like Nikos Kazantzakis’s noel that the film was based on, we see Jesus struggle with the temptations of almost every emotion we come across today such as; fear, depression, and loss.  Scorsese captures this perfectly.  This is an incredible film with wonderful acting and a wonderful backdrop of Morocco.  If you have not seen it, then get it and enjoy.  If you have seen it, you’ll love this upgrade to hi-def. 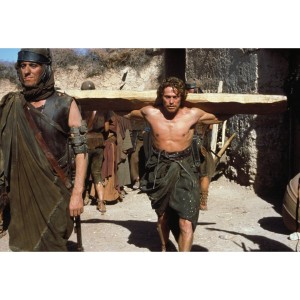 The film looks astounding.  It comes in that glorious 1080p HD transfer with a 1.85:1 aspect ratio.  This release according to the disc was restored with the supervision of cinematographer Michael Ballhaus and editor Thelma Schoonmaker.  And I must say, that is looks insanely good.  The film is made to look gritty and raw, being filmed in a desert like location.  Add to that the time and era, we get this beautiful digitally stored film that still has the filmic look, but has that HD touch.  The clarity and colors are amazing.  The colors while mostly lighter shades of browns and yellow look great, there is a hint of other vibrant colors throughout.  The flesh tones seem natural and there was no aliasing that I noticed.  The blacks were deep and inky and the depth was great.  Truly a wonderful video presentation.  The Audio has a lossless 5.1 DTS-HD mix and was supervised by sound editor Skip Lievsay.  This is more of a front speaker heavy audio mix with the dialogue being crustal clear with no hissing or cracks.  The ambient noise is there, but not as much as I hoped, but you will hear some of the ambient noise on your surround speakers.  And Peter Gabriel’s score is absolutely breathtaking on the sound system.  It just flows so evenly and roars.  A great audio presentation. 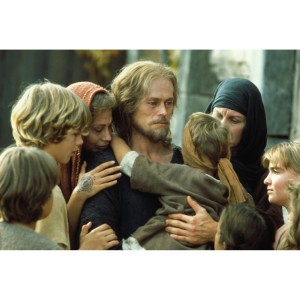 THE ULTIMATE WORD
I highly recommend this Criterion bluray.  It is an amazing film with top notch acting by beloved actors.  The video and audio are fantastic and while the extras are on the bit of the light side, they are really good.  You’ll love the commentary and the interview with Peter Gabriel.  The video and audio upgrade alone is worth getting this film.  It’s great to know Scorsese did this film.
-Bryan Kluger