The History Channel Reserved Its First Scripted Series With ‘Vikings’!!! 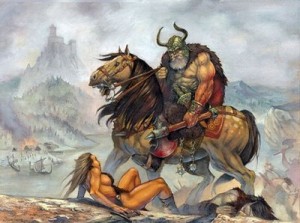 The History Channel is taking its first step into scripted television with a new series entitled ‘Vikings’.  The guys behind the show ‘The Tudors’, Michael Hirst and Morgan O’ Sullivan will bring the series to The History Channel for a ten episode order.  The series will premiere sometime in 2013 and will be filmed at a new studio in Ireland.

The series will follow the forceful Norsemen who fought, ate, traded, and explored during the medieval times according to Deadline.  “This is an amazing crossroads for History embarking on our first scripted series,” said the channel’s general manager Nancy Dubuc. “People think they know about the Vikings – we see references to them all the time in our popular culture from TV commercials to football teams – but the reality is so much more fascinating and complex, more vivid, visceral and powerful than popular legend.”

“‘Vikings’ follows the adventures of Ragnar Lothbrok, an actual historical figure, and the greatest hero of his age. The series tells the sagas of Ragnar’s band of Viking brothers and his family, as he rises to become King of the Viking tribes. As well as being a fearless warrior, Ragnar embodies the Norse traditions of devotion to the gods – legend has it that he was a direct descendent of Odin, the god of war and warriors. According to History, the series “will boast a polished, stylized look that pushes the boundaries of television drama” and “will feature “imaginatively choreographed battles that emphasize individual points of view, strategies and ruses rather than mindless, graphic slaughter.”