‘Braveheart’ TV Series Will Give Us Freedom!!! 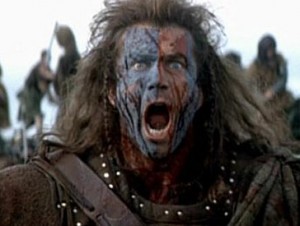 “They may take our lives, but they’ll never take our FREEDOM!”  The Scottish legend William Wallace who was played by Mel Gibson in the film ‘Braveheart’ is getting a tv series.  The show will be called ‘Wallace’ and will be a historical drama series based on the life of Wallace.  Think along the lines of the series ‘Spartacus’ and HBO’s ‘Game of Thrones’, but with the ‘Braveheart’ story.

Mick Davis who produced and wrote the series ‘Eleventh Hour’ will also write and produce ‘Wallace’.  He will also get a creator credit.  This show came from ideas from Kent Dalian and Seoras Wallace who were advisors on ‘Braveheart’ according to THR.  The series will follow Wallace’s backstory which are his yars where he attempts to unite Scotland.  Expect all the loves and losses and tons of battles.

“This was a turbulent time in Scotland’s history, in which William Wallace had a starring and pivotal role,” STV director of content Clements said in a statement announcing the news. “We plan to delve deep into his character and explore his passions, bringing parts of history to life in a spectacular and raw depiction.  With all eyes on Scotland in the current political climate, this also seems to be a very appropriate time to tell this story in more depth.”

I wonder if Mel Gibson will be an executive producer on the project.  Your thoughts?