There is a ‘Short Circuit’ Remake In The Works!!! And they Have their Director and Writer!!! 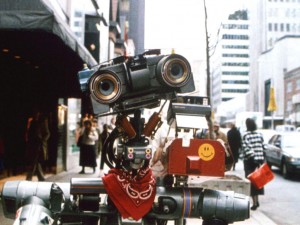 Dimension Films announced today that they have hired Matt Lieberman to pen their family film SHORT CIRCUIT. Lieberman will work closely with already attached director Tim Hill (HOP, ALVIN AND THE CHIPMUNKS) in the reimagining of the 80s classic. Lieberman is a recent alumni of the Disney writers program. Details of the new take are currently being kept under wraps.

“Dimension has had great success with the SPY KIDS family series which grossed over $500 million worldwide,” said Bob Weinstein, co-chairman of The Weinstein Company (TWC). “We are looking for SHORT CIRCUIT to be our next family franchise and are excited to be working with Matt Lieberman and Tim Hill, who has had great International success with HOP and ALVIN AND THE CHIPMUNKS.”

Shooting is scheduled for the end of the year with a release in Summer 2013.

The deal was negotiated for Dimension Films by Adrian Lopez, VP of Business and Legal and Matthew Signer, SVP of Production and Creative Affairs; for the filmmakers by Brad Rosenfeld at Preferred Artists and Melissa Rogal at Lichter, Grossman, Nichols, Adler & Feldman, Inc.. Lieberman is represented by Rosenfeld, Rogal and Adam Kolbrenner at Madhouse.

Now, Tim Hill does not seem like the man for this job whatsoever.  I’d rather see the guy who directed ‘Real Steel’ direct this remake.  Also, the writer Matt Lieberman, seems to not have a writing resume that I can find.  Interesting choice, but I applaud it.  Will Ally Sheedy, Guttenberg, or Fisher Stevens make an appearance?  Only time will tell.