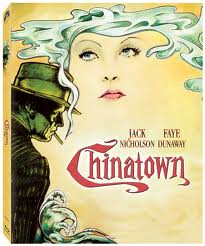 Roman Polanski’s AWESOME 1974 crime drama starring Jack Nicholson and Faye Dunaway will be released on blu-ray April 3rd.  The film was nominated for 11 Academy Awards including Best Director and Best Picture, but only won for Best Original Screenplay.   ‘Chinatown’ will have a 1080p transfer and will have a Dobly TruHD 5.1 audio mix as well as Mono.  It will also have several extras an a collectible booklet.

It’s great to see Fincher, Soderbergh, and Howard on this disc.  I just hop there will be a Criterion version of this film sometime in the future with Nicholson commentary.  Pre- orders are available.