Classic Waxxx: The Black Keys “The Big Come Up” 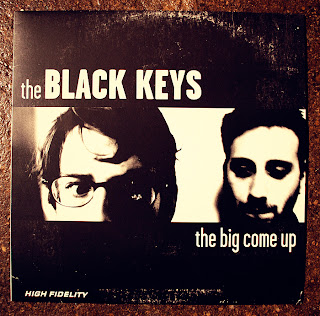 As time goes by the albums that have already obtained classic status continue to become greater classics, nay, timeless. Of course, there is also room for more recent albums of late to obtain such status, but some become classics the day of their release, such as The Black Keys’ debut LP “The Big Come Up.”

I thought I take a moment to recognize a really great record from the last ten years into a new segment for Classic Waxxx. It was also an opportune moment to word play on “Black Friday” as well as celebrate the band’s first release, as they ready their seventh and latest LP “El Camino,” which is sure to be a great addition to the rest of their catalog.

If you aren’t familiar with The Black Keys it’s time to get acquainted. The band is made up of singer/guitarist Dan Auerbach and drummer Patrick Carney from Akron, Ohio, much in the same vein of garage badasses The White Stripes, but with more ‘oomph’ and more of a fleshed-out full-tilt boogie sound. The blues runs deep in this Midwest duo, being influenced by swampy Delta Blues musicians like Junior Kimbrough and Mississippi Fred McDowell. The opening track, “Busted” is riddled with tasty morsels of Delta and Chicago Blues, and it’s just two guys who sound like a hungry juke joint symphony. 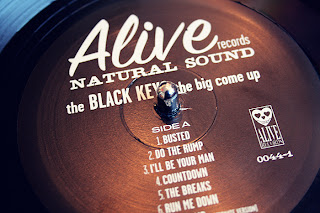 Aside from the blues, Auerbach squeezes in a bit of that famed ‘Sun Sound’ guitar twang (a la Carl Perkins and Scotty Moore) on “Countdown,” which might as well be a Sun Studios buried treasure. The duo immediately shifts gears and peppers on some funk and soul/hip hop on “The Breaks” with some screeching guitar for snappy effect.

What impresses me most about this record is the killer cover of The Beatles’ “She Said, She Said” played to perfection. Again, The Black Keys sound like a five piece band with just drums, some multi-tracked guitar, bass and vocals, and this alternate vinyl version would definitely get the stamp of approval by John Lennon and George Harrison for sure. It ranks up there with even some of Joe Cocker’s best Beatle covers (see “She Came In Through The Bathroom Window” and “With A Little Help From My Friends.”)

Side B of the record opens with a pair of additional alternate recordings of “Heavy Soul” and “Yearnin’,” different from the CD release (talk about a great marketing ploy.) “Heavy Soul” definitely takes a page from The White Stripes ‘how to’ playbook with Carney’s heavy kick drum beating and Auerbach’s precise and authoritative offensive guitar attack. Another treat that makes Side B killer and entertaining is their cover of The Stooges’ “No Fun,” which also appears as a vinyl only exclusive. The covers on this album are so genius that upon first listen the songs are instantly recognizeable, but for the life of you can’t remember how or where you know them. The Black Keys stay true to the original song’s appeal while making them completely their own, especially the blues staple, “Leavin’ Trunk.” 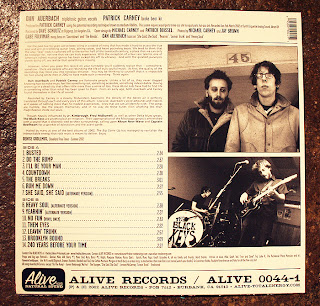 While most people were going crazy for the garage rock revivalists The Stokes and The White Stripes I think most music fans seemed to completely miss what The Black Keys were doing. “The Big Come Up” is garage rock at its most unadulterated, most entertaining and ball bustin’ best. And again…it’s just two dudes with an ear and soul for raw blues and rock. This is what the blues revival would have sounded like if it didn’t come from England in the 1960s, but in the frozen wasteland on Amercica’s Midwest region. Which brings me to the most appropriate track on the entire LP, “240 Years Before Your Time.” It’s a slick sonic production, incorporating Carney’s hip hop drum beat, coupled with Auerbach’s dirty ‘triplofonic’ guitar and a 1950s planetary voiceover, reminiscent of Jimi Hendrix’s tune “EXP” from ‘Axis: Bold As Love.’

“The Big Come Up” is not only one of The Black Keys’ best albums, it’s one of the best debut albums in recent memory. It obtains instant classic status, not because it is incredibly good, it’s a classic because it’s one of those albums you’ve listened to countless times, have loved and known all your life, you just didn’t realize it at the time. Of course, I’m always impressed with any musicians who tip their hats to their blues and rock forefathers. It’s this kind of sound and feeling on “The Big Come Up” that keeps the lamps trimmed and burning for future blues and rock fans, and keeps my hopes up that not all new music is complete and utter shit, like dollar store junk that gets discarded two days after purchase.

If you don’t own “The Big Come Up” on vinyl, do yourself and the rest of hip society a favor and immediately rush out to buy it. It’s a life changer. And be sure to tell your local independent record store ‘thank you’ for carrying The Black Keys.

Album Notes | The Black Keys “The Big Come Up”