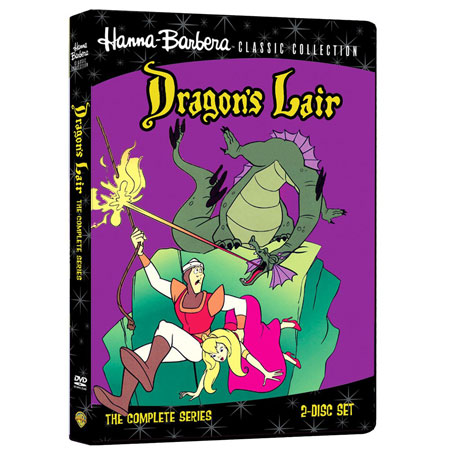 Yes!  That Dragon’s Lair from your favorite 80’s video game had a television series.  The complete series had a mere thirteen episodes and it focused more on the continuing adventures of Dirk the Daring rather than the plots of the video game.  I’ll be honest with you.  These brought back tons of nostalgic memories of me playing this video game and it felt good.  But the cheesy story plots and average animation made this series difficult to enjoy to the fullest and definitely doe snot hold up in any way shape or form for those of you who might have seen this at an earlier time.  But, I will say that if you are a die hard fan of this franchise and love old rare animated shows, then this is a catch.

The legendary video game Dragon’s Lair was a blockbuster (and quarter guzzling) sensation when it first debuted, spawning sequels, imitators, and a beloved Saturday morning cartoon series. Developed by the powerhouse animation crew put together by Joe Ruby and Ken Spears, the Dragon’s Lair cartoon made many contributions to the Dragon’s Lair saga, from naming the Dragon “Singe” to rounding out the cast with such memorable supporting players as Bertram the horse (voiced by animation legend Peter Cullen) and Timothy the squire (voiced by Michael Mish). Mimicking the action of a video game, Dragon’s Lair pauses the action and asks the audience which action Dirk should take next in his never-ending quest to protect the kingdom of King Ethelred and his beloved Princess Daphne. But enough talk! Dirk the Daring faces doom throughout this 13 episode, 2-disc set and he needs YOU to help him decide what to do next! 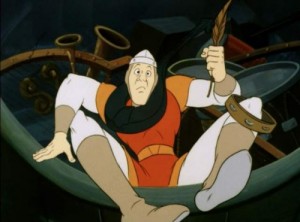 The video is presented in 4×3 Full-Screen aspect ratio and definitely looks like it came straight from a VHS transfer 30 years ago.  Meaning there are tons of flaws everywhere.  Don’t get me wrong, the video looks better here and there, especially in later episodes, but there are tons of visible dirt and grime on the presentation.  One might say this adds to the nostalgic feel of it all.  The audio is a mono mix and sounds flat  with subdues dialogue.  The score and sound effects come across a little better though.  I guess there wasn’t much anyone could do with this at the moment, but at least it’s out right?

This complete series of ‘Dragon’s Lair’ is a badass addition to the Warner Archive.  Sure it has its flaws in the audio/visual department and zero extras, but back in the 80’s we didn’t have extras nor did we have hi-def.  This will definitely take you back to those times when you were a kid and make you enjoy the finer things.  I know I did.  This is an exclusive only to the WB shop.  So you know it’s a collector’s item and rare.  Enjoy.