Bryan Reviews ‘Beauty and the Beast 3D’!!! (A Blu-Ray Review) 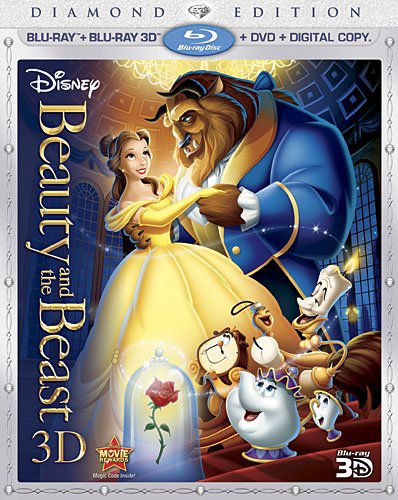 Beauty and the Beast is absolutely one of the best animated films of all time.  When it first came out. it was a modern marvel and is now a pure classic.  One of the best tellings of the story.  This bluray was released a few months ago and now Disney has released it again with the 3D bluray disc along with all the other discs.  The 3D actually elevates the original content through the new 3D effects.  The same AMAZING audio mix and all the same great extras made it to this release.  A must own for any fan of the film and for 3D tv owners.

There has been many versions of this tale throughout the years, but I find myself always thinking of this Disney animated version each time someone mentions Beauty and the Beast.  It’s that good.  It’s full of adventure, excitement, romance, and magic.  Not to mention it was a landmark in 2d animation with that big musical number where Belle and the beast dance in the big ballroom.  We all know the story of Beauty and the Beast and Disney makes this is a modern day classic all over again when they released this.  The supporting characters are all amazing, funny, and charming.  Angela Lansbury’s voice as the teapot is just epic.  I just wish she was my grandmother.  Still do.  And Gaston, the evil villain of the story is just done so perfectly.  I really believe this version of Beauty and the Beast paved the way for newer and better ways to animate film.  This set the bar very high with the new techniques they used to film this.  And remember back when this film came out all those years ago, t was nominated for best picture at the Oscars.  In today’s world, it is fairly common for an animated film to make it in to the best picture category, but back then, it was unheard of.  And once again Disney has converted this to 3D and it is spectacular. I love this film and everything about it.

For this 3D release, ‘Beauty and the Beast’ is presented in a 1080p MVC transfer in the 1.78:1 aspect ratio.  With it’s conversion to 3D, you will see this film in a new and exciting way.  The colors boast a super rich boldness and come across as very bright and rich in texture.  The detail of the backgrounds and characters are exceptional.  Everything looks simply amazing.  The 3D aspect gives everything great depth.  The buldings, the characters, the signs, the animals flying and hoping around all look sensational.  The ballroom scene is exquisite and one of my favorite things in the film.  And there is also a scene where Belle blows some petal of flowers into the wind, and I literally thought they entered my living room.  Very cool.  The rain sequences in the film looks awesome in 3D as well.  I was very impressed as I’m sure you will be.  The video is nearly flawless and just impressed the hell out of me.  The audio is in a 7.1 mix and just sounds outstanding.  This audio mix is demo worthy.  The dialogue is crystal clear and just radiates the room.  You actually feel like they are in the room talking.  The music and songs are amazing and just use the full potential of the speakers.  One of the better audio/visual presentations of the year no doubt.

This 3D release is uncanny.  Everything about the film is amazing.  The audio and visual presentation is out of this world and the conversion to 3D is beautiful.  Tons of extras pack this release to elevate your pleasure in enjoying this fine classic fairy tale.  I love everything about this film and it is a MUST OWN.  Definitely get this.