Bryan Reviews ‘The Others’!!! (A Blu-Ray Review) 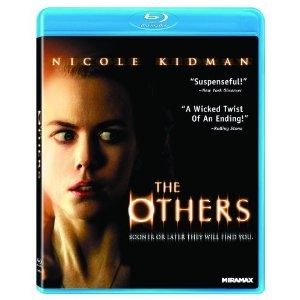 I remember seeing this in the theatre and jumping out of my skin several times.  This film is so creepy and tense that I was on the edge of my seat through the entire film.  Those images of dead people n the pictures that people kept freaked me the fuck out.  Still does.  This is one of my favorite ghost story films of all time.  Nicole Kidman is brilliant in this and the kids are just as good.  Watch this to get in spirit for Halloween.  And if you watch this, you might just be afraid to walk down the dark hall at night.  This is an excellent blu-ray release.  Love having this in hi-def.

This is one hell of a creepy ghost story.  I will admit to be completely freaked out upon my first viewing of this.  It still creeps me out.  It’s one of those horror films that has that slow creeping tension that keeps you on the edge of your seat throughout the entire movie.  It’s a character driven film and with each passing moment, the characters get creepier and creepier.  Strange things happen that make you question these characters and who they really are.  Tons of frightening scenes will make you think twice about walking down your own hall alone in the dark.  You will start to hear voices that aren’t there and see things that don’t exist.  Yes. That’s how awesome this movie is.  The movie takes place in the British isle of Jersey after World War II and follows Grace (Nicole Kidman) and her two kids who live in a gigantic mansion whom the father has died in the war.  The children have a rare disease which prevents them from going into sunlight and all the housekeepers have mysteriously disappeared.  The daughter makes friends with a kid named Victor which only she can see and strange things are afoot in the house.  This is truly a frightening film and worthy of any horror movie night.  I just love this film.  This is the most I have jumped in any film ever. 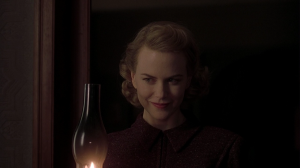 The video is presented in a 1080p/AVC MPEG-4 from its original aspect ratio of 1.85:1.  This blu-ray looks amazing.  There are a lot of dark rooms in the film so all the dark scenes with black rooms and no light looks great.  The blacks are deep and raven yet there is tons of clarity in the shadow.  The skin tones are natural and background which is all candle light is done to perfection.  Really great transfer.  The audio has an English 5.1 DTS-HD mix.  So with this film being a horror film and a ghost story at that, there are tons of whispers in the dark, wind blowing through the house, and strange knocks and noises all around.  This is done so well on this audio mix.  I actually thought it was happening in real life in my house.  The sound effects and dynamic range are incredible.  The dialogue is crystal clear and boasts over the speakers. This lossless audio is a winner.  It scared the hell out of me.

‘The Others’ is one hell of a fun horror film.  This blu-ray is top notch.  The audio and video presentation is great. Especially the audio.  Still creeps me out listening to the film.  The extras are decent and the acting in the film, especially by the kids is stunning.  This is one smart, scary, and psychological horror film.  One of the best ghost stories of all time.  If you are a fan of horror, then this is a must own.  Love this.