The ‘Killer Elite’ Trailer Will Blow You Away!!! 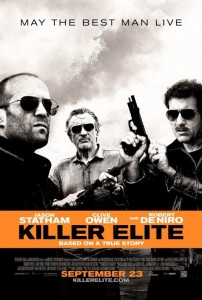 “Based on a true story, Killer Elite races across the globe from Australia to Paris, London and the Middle East in the action-packed account of an ex-special ops agent (Jason Statham) who is lured out of retirement to rescue his mentor (Robert De Niro). To make the rescue, he must complete a near-impossible mission of killing three tough-as-nails assassins with a cunning leader (Clive Owen).”

Wow. Clive Owen – yummy. Handsome Rob – tasty. Robert DeNiro – old.  If Heat, Bourne (take your pick), Munich & The Jackal had a baby, I bet it would look like this. Curious, is this in any way related to the James Caan/Robert Duvall version from ’75?