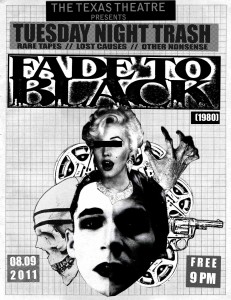 The Texas Theatre welcomes you to a new series based on those late night movies that are too terribly great to turn off! Lost gems – weird downloads… all kinds of stuff that someone needs on a TUESDAY to forget about MONDAY and get through to HUMPDAY!  Did we mention that this is FREE FREE FREE!!!  Show starts at 9:00PM!!

Each screening presented in its original, degraded and static-eaten format!

“An interesting, introspective variant on the ’80s slasher formula, this low-key psychological thriller details the troubled life of obsessed movie junkie Eric Binford (Dennis Christopher), whose love of old movies extends far beyond his job at a film distributor’s warehouse and endless late-night film screenings in his bedroom. His singular obsession eventually rounds the bend into psychosis after he crosses paths with a Marilyn Monroe look-alike (Linda Kerridge), who becomes the physical embodiment of his cinematic desires. When stood up on what he believed would be their first date, Eric becomes homicidally unbalanced, transforming himself into a gallery of classic movie characters — including Dracula, The Mummy, Hopalong Cassidy, and Norman Bates — and sets out to destroy his oppressors, starting with his crotchety wheelchair-bound Aunt Stella (Eve Brent Ashe), then targeting a boorish co-worker (a very young Mickey Rourke), and eventually working his way towardKerridge. The film begins with a groovy concept, but loses something in the execution — the horror and comedy elements fail to gel completely, and Christopher‘s performance is too creepy to generate much empathy.”