Check Out The ‘Paranormal Activity 3’ Trailer!!! 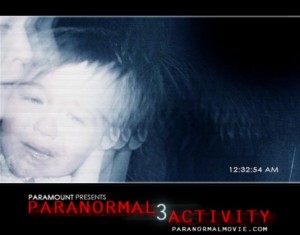 Of course there was going to be a third film.  The first two made hundreds of millions of dollars.  This third one is yet another prequel to the first film and even the second film.  Remember in the first ‘Paranormal Activity‘ film, where the female character told us that this demon haunted her from a very early age?  It’s set in that time period.

There are definitely some creepy moments.  I enjoyed the first two films.  I only hope they don’t stray from the original camera work.  It looks like this third film takes place in 1988.  Enjoy the trailer.

I am a scaredy cat so I have not seen 1 or 2. But I think this trailer made me poop my pants.  I don’t like haunting child laughter. I don’t. It is awful. The screeching scene changes made my heart stop. I need an adult and an adult beverage.