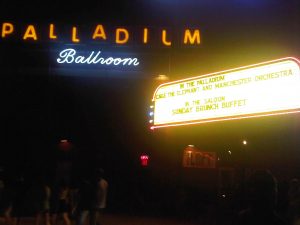 Sleeper Agent opened up for Manchester Orchestra and Cage the Elephant this past Sunday evening, May 19, 2011 at the Palladium.

Some people came only to see Manchester Orchestra, others just went to see Cage the Elephant. Either way the Palladium was very crowded…Palladium Ballroom was packed! I was shocked for two reasons: #1 it was Sunday (but I guess it was a holiday weekend – and most people didn’t have to work on Memorial Day) and #2 was because the bands that were on the bill only have a few songs on the local radio stations that are played, although on XM satellite radio, they have a few more songs in the rotation. Regardless, I have heard a lot of promoting for the spring tour 2011 on the satellite radio, even if it wasn’t specific to the 17 locations moving from the east to west coast. 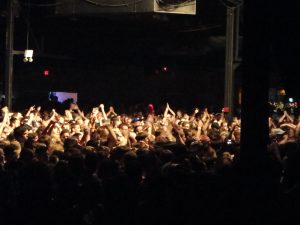 Manchester Orchestra formed in 2004  Atlanta, Georgia known as an indie rock band. They have gone on tour and believe it or not have played in Dallas previously! Their new studio album, “Simple Math” was just recently released in early May and the title track has been featured on XM radio. I don’t believe the majority of the audience knew many of the Manchester Orchestra songs. Although, I spoke to people that came specifically for Manchester Orchestra after seeing them at ACL (Austin City Limits) and fell in love with them. During one of the songs, people put lighters in the air (something you don’t really see anymore, since the invention of the cell phone  with the “fake lighter app” or just using the light from the phone to wave in the air). At any rate, it was quite comical when the lead singer, Andy Hull stoped the song and said, “…you must not know the song, it’s about to get rowdy!” He then continued with the song and then out of no where, people started to crowd surf – making it rowdy! 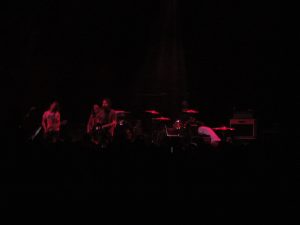 After playing several songs, all members of the band left the stage except the lead singer, Mr. Hull. I thought the band was taking a small break and he would jam for a bit or sing a solo song and then let all members have their “time to shine” as they got back on stage, I was wrong, no one came back. Hull dedicated the song to a special friend, sang it solo with his guitar, and then he left the stage. Manchester Orchestra was finished. The crew started moving equipment off stage, some audience members left, some looked confused and most stayed put in order to secure their spot for Cage the Elephant when they realized that Manchester Orchestra was over. 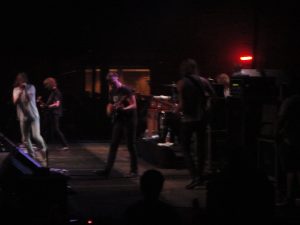 Cage the Elephant is from Bowling Green, Kentucky…it’s in southern Kentucky, that’s it, nothing more to say about it except it’s such a random spot for awesomeness to have been created. The band formed in 2006, and have put out two albums, the first was a self titled album in 2009 with radio hit “Ain’t No Rest for the Wicked” and then most recently Thank You, Happy Birthday was released this year in January.

Lead singer, Matt Shultz reminded me of a young version of Dave Pirner (Soul Asylum) – everything from his appearance to his dance moves. Shultz didn’t play an instrument, he spasticly moved around singing the entire time (making it hard to capture photos)!

The songs with radio play had more energy from the crowd (because they could sing along) but everyone seemed to be having a great time even when the audience didn’t know the songs. During the song, “Sake me down” he would stop singing and let the audience fill in the words “even on a cloudy day” and it sounded pretty good.

Shultz dove into the crowd and was carried right back to the front of the stage. It seemed  as though there was a roller coaster crowd surfing going on. People would surf to the front, they would land, and then they would go to the back and do it all over again!

All of the bands pretty much sang strait through without a lot of in between talking or transition, I guess they wanted to make sure to play a bunch of music! As the evening came to an end, people were hyped and wanting to buy albums and other merch! The bands all thanked the audience sincerely from the bottom of their hearts and everyone had a good time!

One thought on “Cage the Elephant/Manchester Orchestra Tour @ Palladium”