Last weekend, May 20-22nd, the city of Richardson hosted the Wildflower Festival with music, vendors, and fun! This year was the 19th anniversary of the festival.

The big draw of this festival is the music. There were five stages to listen to music ranging from tribute bands (Night Fever – The Bee Gees Tribute, BeBe Le Strange – a tribute to Heart, Frontiers – the Journey Tribute Band, and A Hard Night’s Day – Beatles Tribute Band), singer/songwriters, Dallas’ talent (The O’s, Descender, Andrew Delaney and the Horse You Rode In On, etc., old favorites such as REO Speedwagon, The Guess Who, Jerry Lee Lewis and Whitesnake as well as Seven Mary Three (7M3), Lit, Fuel, Better Than Ezra and Sister Hazel.

Friday evening the rain delayed me from arriving on time to see Dallas’ Descender, but I did see 7M3 and they were good. When they were finished, I walked to the main ViewPoint Bank Stage to see the legendary Jerry Lee Lewis. I heard people talking about how they didn’t even know that Jerry Lee Lewis was still alive… He is 75 years old and sounds exactly the same as he did during the height of his popularity in the 50’s. The only difference was that he sat on the piano stool the entire time, he did not jump around as he did when he was younger. 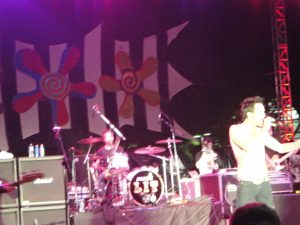 I moved back to the metroPCS stage to see Lit, and they blew me away!Lead singer, A. Jay Popoff  had such charisma, he ran around the stage with such energy and passion. He would drink water and spit it all over the stage, then drink from his bottle of wine and sing. He interacted with the crowd by moving off the stage onto the ground and having the audience sing with him. He had a good time and so did the fans! I moved once again back to the ViewPoint Bank Stage to see The Guess Who for a few songs, the area in front of this stage was packed, I couldn’t get very close to the stage, although I could see what was happening on the stage on the big screen. Again, I traveled back to the metroPCS stage in time to see Fuel, which was a bit of a disappointment compared to Lit. Don’t get me wrong, Fuel was still a good show, just not as exciting as Lit. At one point- after Lit performed, there was an announcement for everyone to take cover inside of the Eisemann Center because there was a storm heading towards Richardson with expected hail. Event staff walked around handing out MetroPCS panchos. I went to the Eisemann Center and looked around viewing the art guitar auction.

The art guitar auction was pretty cool. People turned guitars into pieces of art and they were auctioned off. I saw guitars made into furniture as well as just painted guitars for decoration. The guitars were on display inside of the Eisemann Center and sold in a silent auction for the duration of the Festival. Proceeds from the auction benefit the NETWORK of Community Ministries and the fine art programs in the secondary level of the R.I.S.D.

Saturday I wandered around to see the various vendors during the day. I saw some awesome crafts. There was jewelry, clothing, and art to be seen in booths. Most of the vendors were local. One of my favorite booths was ez-duz-it by Elliott who specializes in eco-friendly handmade mixed-media pop culture art and music inspired handbags, belts, straps (for laptop bags or guitars), pendants, and a collectin of mixed media modern art. Another booth that caught my eye was Two Dreamers Dominoes, which had three sizes of dominoes that had designs on them made into necklaces (reasonably priced).

Then there was the music: The highlight for me was Cracker. There wasn’t a huge crowd, but I don’t think people remember or realize who they are until they hear the popular radio song “Low” which to me isn’t even the best of what they have to offer! Other highlights that need to be mentioned are Denton’s Andrew Tinker (who I like to compare to Ben Folds) featuring a piano played an early set at 3:15 along with Dallas’ folk duo The O’s featuring a banjo played at 9:10 pm both wow’d their audiences.

Better Than Ezra ended the evening starting at 10:30 and was off the wall with unique covers and plenty of jokes thrown into the crowd. Saturday was fulfilling and full of art and entertainment!

Sunday, popular 80’s hairband, Whitesnake played at 6:30 on the metroPCS stage. English, lead vocalist David Coverdale was absolutely appropriately inappropriately humorous. He made jokes about having kids in the audience and was liking the view of some females on the left side of the stage who he referred to as “super models”. They played some new songs from their new album entitled Forevermore. Guitarists, Reb Beach and Doug Aldrich had a shredding guitar war. They went back and forth showing off their skills. The crowd went wild and then as they were closing with their last song the rain started to fall and people starting to disperse. That was the end of the Wildflower! Festival 2011. 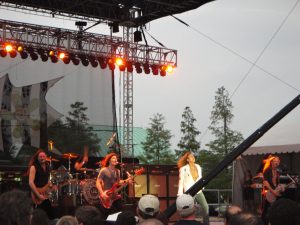