Who Is Ready For The Country, Ya’ll? 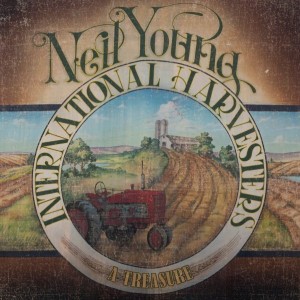 Believe it or not, Neil Young and the country go together like peanut butter and jelly, mashed potatoes and gravy and Woodward and Bernstein, so it’s no surprise when Young rocks and roars “Are You Ready For The Country” everyone listens.

Neil Young International Harvesters “A Treasure” is a 12 track collection of brilliant live material culled from Young’s 1984-85 tour, several tracks which have never been before released, which drops on the streets Tuesday, June 14th.

During the 1980s, Young was under Geffen Records, which initially gave him a chance to do some experimental music. However, after producing a mostly electronic-sounding record, a rockabilly record and a traditional country record, Geffen sued Young for producing music “uncharacteristic” of Neil Young.

The country record Young released, “Old Ways”, actually was very characteristic of Neil Young, as Young has always had a bit of a country flair to many of his records, like “Harvest” and “Comes A Time”. At the time “Old Ways” was released in 1985 several of those songs would find their way on set lists during the International Harvesters Tour.

The International Harvesters was a ‘who’s who’ of country musicians, including the late Ben Keith (whom also co-produced “A Treasure”) on steel and slide guitar and Rufus Thibodeaux on fiddle, along with living legends Spooner Oldham and Hargus “Pig” Robbins on piano, Tim Drummond and Joe Allen on bass, Anthony Crawford on mandolin & guitars and Karl Himmel on drums.

What makes “A Treasure” really special, aside from the incredible talent that is presented here, is the version of Buffalo Springfield’s “Flying On The Ground Is Wrong”, which is sort of rare to show up on a Neil Young live recording, as well as the Johnny Cash-like train anthem “Southern Pacific”, recorded in St. Paul, Minnesota. “I love this record,” Young says. “I hadn’t heard these takes in 25 years, but when we unearthed them co-producer Ben Keith said, ‘This is a treasure.'” A treasure it is, indeed. Sure, this is a country album, but Young still manages to unholster his guns and shred on guitar full-on Crazy Horse style on “Motor City” and album closer “Grey Riders”, making you wonder ‘how in the hell is this uncharacteristic on Neil Young?’

“A Treasure” has already been given a brief audience through it’s initial exclusive release to participating Record Store Day indie shops, but makes its full court press everywhere on June 14th. The album is available in several formats including standard CD, vinyl (180gm and 140gm), digital download with and without videos, and as a deluxe CD/Blu-ray package. For you vinyl fans, the double LP does come with a download code so that you can take the album with you ‘to the country’ (pun intended.)

While you wait to pick up “A Treasure” from your local record store be sure to check out Young’s interesting video on the technical specs of the record, which features Young in grainy Super 8, as well as some cool fan footage of live performances that Young and crew didn’t have in their own archives for this record.

After nearly five decades of making music, the public should know by now that anything he records is ‘characteristic of Neil.’ “A Treausre” is certainly one of those great gems to see the light of day from Young’s obviously impressive archive. With his music vitality and diversity, Young will only continue to amaze us years after he plays that great gig in the sky.

Go buy “A Treasure”…it’s worth more than its weight in gold, boys and girls. You won’t be sorry.