Destructor of the World, Roland Emmerich’s New Film “Anonymous” Has A Trailer!!!! 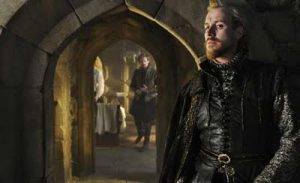 “Anonymous” may not be the film you would tie with director Roland Emmerich.  Roland is known for destroying society and the world several times over with such films as: “Independence Day”, “10,000 B.C.”, “The Day After Tomorrow”, “Godzilla”, and “2012”.  Emmerich seems to be going into the intellectual literary universe with “Anonymous”.

“Anonymous” will ask the editorial question, “….What if Shakespeare did NOT write any of his plays, sonnets, and poems.”   Judging by this trailer, it definitely seems to be filmed by Roland Emmerich.  What with all the sweeping and helicopter shots over landscapes and landmarks.  The film has a stellar cast including: Rhys Ifans, Vanessa Redgrave, Joely Richardson, Jamie Campbell Bower, and David Thewlis.  Maybe Emmerich is trying to redeem himself from the last several films he has made.  It definitely looks like it has the potential to be great, but I do not have my hopes up yet.  What do you think?