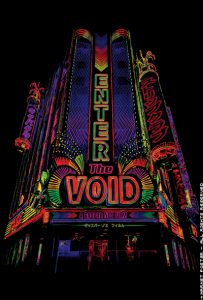 Enter the Void is at times masterful, at times kinda bad, daring, draggy, misanthropic. Much of the film was shot first person, complete with blinking. The story telling was at times very clever. The visuals were at times rich. But… There were times that Noe hung on a visual too long.

An early drug scene eventually devolved into an itunes visualizer after it overstayed its welcome. A later scene of floating above the neon looks like a ps1 cut scene. The movie sort of becomes formless intentionally. The movie has multiple occasions where it feels like its trying to make you stop watching. Or at least looking away. Some scenes in this will just gut the viewer.

This is a film for those that study film, that watch too many movies and want to see something different. It isn’t fun to watch. It isn’t entertaining. It is long.