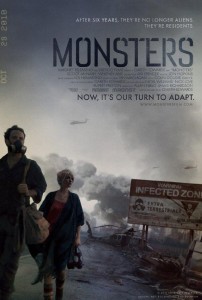 Now you all know I love monster movies.  All monster movies.  There is just something about the magical world and the possibilities and different survival scenarios in monster movies that just takes me to that next level.  In most of the survival monster movies I have seen, I usually spend the next couple of days realizing my own survival plans and my “what if” scenarios if the film became a reality.  What I would do differently than the characters in the film.  That sort of thing.  I can tell you this though.  This film, “Monsters” is one of the better monster movies to come out in quite some time.  It is deeper, more suspenseful, and scarier than most monster films I have ever seen.

This film was written by Gareth Edwards.  I am sure most of you have not heard of him, but after seeing this film, he will for sure will be on you radars in the future.  Now this movie was made on a shoe-string budget, but you cannot tell at all.  Since this movie did not get a wide release and it did not get even a modest budget, the achievement here is the way Gareth tells the story and the technology available today and how it is combined to bring the world a complete and wonderful monster movie.

A lot of people will compare this movie to Blair Witch and District 9, while both of those are good films, Monsters is far superior.

Why is it superior you ask?

Well, Gareth tells this story in the most simplistic way.  Which to me means it is the truest and most realistic way.  It is a very  short simple tale of a pair of twenty somethings trying to make their way through an infected zone riddled with giant creatures from outer space in order to get home safely.  Simple.  A quest to get home.  So you do not have director explaining tons of backstory and technology of the creatures throughout the movie which usually draws away from the story.  Gareth uses the sever threat of the giant monsters as a backdrop and he chooses to focus on the more important story.  Which is the couple who fall in love with each other through their intense journey.

I know what you are thinking.  That sounds girlie and sappy and sad bastard type of stuff.  But it is anything but that.  It is more of a romantic adventure with horror.  You have your rich girl who is more of a lost soul than a rich girl, but has a kind heart, and then you have the gritty photographer who is fun and logical and tries his best at being good.  The unlikely pair meet because they have to and make their way through the extremely dangerous infected zone to get to safety.  The couple is exceptionally likable throughout the film.

As I said before, people will be tossing titles around like District 9, Blair Witch Project, and Cloverfield while comparing this film.  I whole heartedly disagree.  I would compare this to Lost in Translation more than the other films I mentioned.

If you have been paying attention to this review, you will have noticed that I have not mentioned blood and guts.  This is NOT that type of film.  I have come to realize that some of the best horror films of all time are not really gory horror films at all.

This is one hell of a film.  A true gem that deserves to be seen by all.

I loved this film.  Go see it.