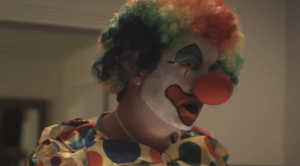 Eli Roth (The Bear Jew, Director of Hostel 1 & 2) will be producing two new films for Cross Creek Pictures and Vertebra Films.  The first film will be called “Clown” which tells the tale of  “a loving father who dons a clown outfit and makeup to perform at his son’s sixth birthday, only to later discover the costume—red nose and wig included—will not come off.”

Eli became involved after finding out about a fake “Clown” trailer made its rounds on the internet the other week with Eli’s name attached to it.  He was however not involved in any way with the project, but after seeing it, he is now.

The trailer was made by Christopher D. Ford and Jon Watts in which Watts will direct with Eli producing.

To show how awesome Eli Roth is, he said:

“Everyone thought it was real (the trailer), or that I had at least made a fake trailer. I called the guys right away and their first response was, ‘Thank you for not suing us!’ I said, ‘Sue you? Let’s make this into a real film!’ ”

What a cool way to get into the business.

The 2nd film Eli will produce will be called “Aftershock” which will be a horror thriller set during the chilean earthquake.  Roth will co-write the film with Nicolás López and Guillermo Amoedo, with López set to direct.

“I have been a huge fan of Nicolas Lopez since his first film PROMEDIO ROJO,” says Roth. “We had been talking about making an English-language film set in Chile, something with the intensity of a film like REC. When Nicolas described to me the terror of [the] hours following the Chilean earthquake, we knew we had found the perfect setting for our story. No phones, no electricity, no police…no chance. All the elements you need for a terrifying story are literally right there under the surface.”

Check out the “Clown” trailer below.