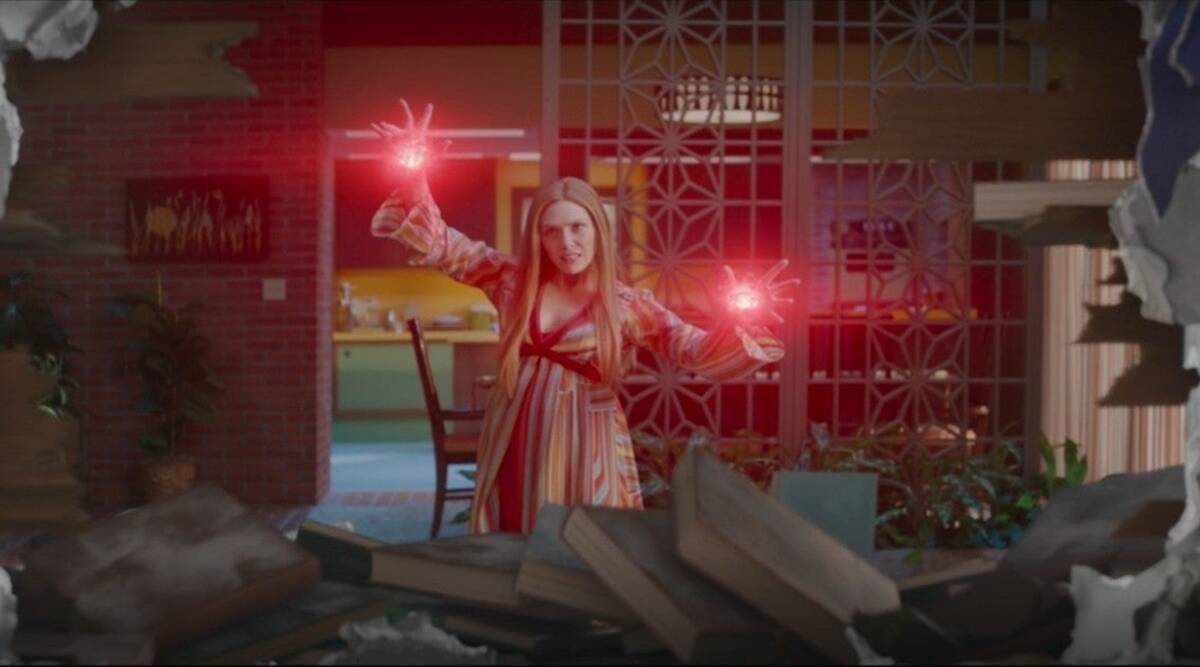 The fourth episode of WandaVision pulls back the curtain on how far the MCU is willing to go to commit fully to their new phase. From the cold opening which shows how people returned after Tony Stark snapped them back into existence to the meta-commentary of the characters trying to figure out what is happening in Wanda’s created reality, it is clear that Marvel intends to use all of their tricks along with some new ones to make these shows the largest events they can be.

The episode opens with the dust that people turned into when Thanos snapped the Infinity Gauntlet reforming those same people after Tony snapped them back into existence. Monica Rambeau reforms on a couch and is startled awake. Monica is the same person who plays Geraldine in the last two episodes of WandaVision, she is the character who Wanda ejected from her town upon mentioning Ultron. Upon awakening, Monica stumbles around the chaos of the hospital where she was sitting with her mother. To Monica, only 20 minutes have passed but the nurse who recognizes her explains that it has been 5 years and her mother died 3 years ago. It should be noted that Monica is the little girl from Captain Marvel who was the daughter of Carol Danver’s best friend.

Apparently, Monica works for SWORD, a SHIELD like organization founded by her mother, and she is sent on a missing person mission to New Jersey. When she arrives outside of Westview, New Jersey she meets Agent Woo who we last saw in the MCU as the FBI agent assigned to Ant-Man’s house arrest. Agent Woo had an individual in witness protection go missing in Westview. Monica sends a drone into the town and it disappears through a forcefield, when Monica approaches the forcefield she gets yanked into the town and Agent Woo is left alone.

Sword arrives and creates a perimeter around the entire town of Westview. They can get no readings and have no idea what is going on. Darcy the scientist and doctor from the Thor series played by Kat Dennings arrive to lend her expertise in cosmic energy. Darcy discovers that the cosmic energy isn’t at a dangerous level yet but it is growing, she also notices radio wave signals and uses an old TV to realize that there is a sitcom being made inside of Westview. The characters from SWORD are watching the exact same broadcast we watched for the last 3 weeks right down to the credits. This allows for some really funny meta-commentary when Agent Woo asks if the universe created a sitcom starring two Avengers. Darcy also gets heavily invested in the narrative for some funny exchanges.

The hand at the end of episode one was Darcy watching the show and taking notes. The beekeeper was a scientist sent through the sewers but Wanda changed his outfit and the voice on the radio was Agent Woo trying to contact Wanda on a hunch from Darcy. Both Darcy and Agent Woo question why the episodes are following the order of decades. They also get concerned when the episode cuts away without us (the audience) or them (the characters) get to see what happens when Wanda confronts Monica about Ultron. We get to see this exchange and Wanda gets very upset and uses her full Scarlet Witch powers to launch Monica through walls and out of the town. Wanda then repairs the damage as Vision enters. Wanda seems to know this is all fake because as she turns to look at Vision she sees him all gray with a hole in his head when Thanos ripped the stone out of it in Infinity War. Wanda changes Vision to look normal and moves on as if nothing is amiss but Vision gives a concerned glance indicating he may be real and understands this is not right.

Just another masterful episode to show that the MCU is getting weird but isn’t afraid to have some fun with it along the way.

-In the hospital, Monica bumps into a guy in the commotion he goes flying and seems really hurt by bumping into her. She may have some powers or super strength seeing as this happened and she gets launched through walls to be thrown out of Westview.

– Agent Woo and Darcy are audience stand-ins as they are trying to solve the same mystery we are including mentioning how Vision is really dead.

-SWORD identifies all the “characters” on the show as real people. Notably, missing? Agnes the involved neighbor who seems to know more than she is letting on.

-The shape of the forcefield is a Hexagon which seems to intrigue Agent Woo and the SWORD team. No idea if this is significant but they spent more time on it than I would expect for a throw-away.