“One Night In Miami is a movie not to be missed and is fantastic as it is important to see.”

Iconic film actress and TV Director Regina King (Friday, Watchmen, The Boondocks) has made a big imprint on the silver screen in her feature directing debut with One Night In Miami. This film is a wonderful film adaptation of Kemp Powers’ (Pixar’s Soul) 2013 stage play of the same name that centers on a night in 1964 where four powerful and influential superstars in different mediums hung out in a hotel room in Miami. As King has brilliantly shown her impeccable talent behind the camera before in television, she even furthers and transcends her skills to this poignant and wonderful story, while reminding the world that these same racial and social problems are happening today. One Night In Miami is a phenomenal and important movie.

These four powerhouses were civil rights activist Malcolm X (Kingsley Ben-Adir), singer-songwriter Sam Cooke (Leslie Odom Jr.), NFL star Jim Brown (Aldis Hodge), and the G.O.A.T. himself Cassius Clay (Eli Goree), who would later be known as Muhammad Ali, who all gathered in a small hotel room at the Hampton House Motel and Villas and had a night of drinking and discussions, usually led by Malcolm X. The stage play all takes place inside this one motel room, but King takes some creative cues and moves outside the room to the roof and showcases each man’s previous bouts with racism and inequality as they all try to figure out what’s best for them and their people before they keep ascending into stardom and fame. It gives this story a stronger beat by taking some of the action outside the motel and adds some powerful origins to their mindsets.

In the film before everyone converges inside the motel room, there’s a glimpse of some horrifying interactions with each individual and their supposed friends and colleagues who are white. The racism is ever there, but with a grimacing smile. After Clay wins the World-Heavyweight Title from Liston, the four men inhabit the room as Malcolm X talks to each of them about their role in the civil rights movement and about Islam. Three of these men thought this was going to be a night of fun, laughing, and drinking, but Malcolm had other plans as he announces Clay’s entrance to Islam and is trying to get the other two gentlemen to join. This film is inspired by true events, but nobody knows for sure what happened that night or what was said, however, Powers and King have created a very dynamic and natural dialogue of what might have transgressed that evening in Miami that is as entertaining as it is important. 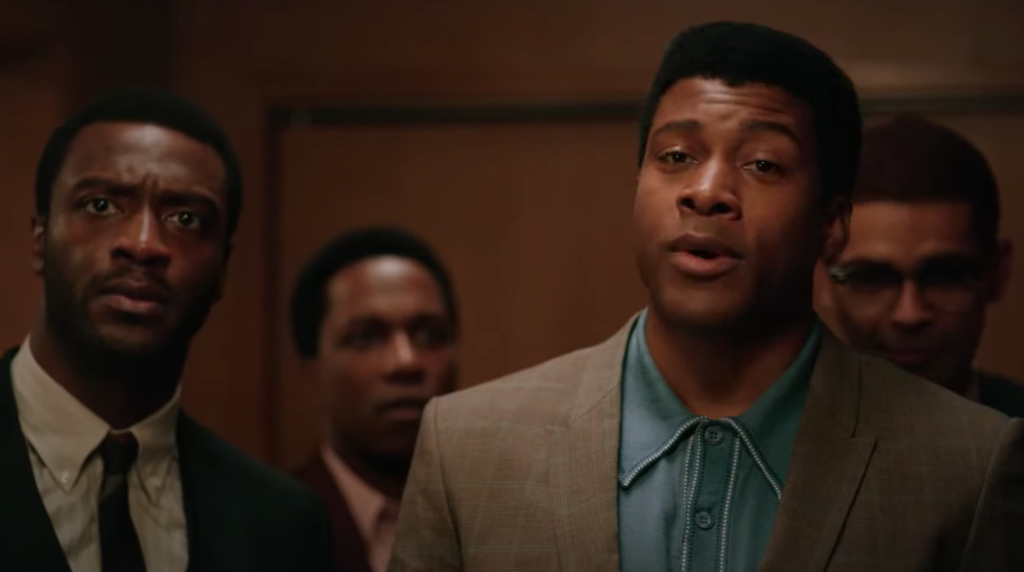 The film shows the struggles of each individual in putting aside their fame and fortune for a greater cause and why it was and still is so important to be a leader on such issues. And King’s direction with Powers’ screenplay really hit home these big points of view from both sides of the coin. Leslie Odom Jr. delivers a remarkable performance as Sam Cooke here. He was great in Hamilton, and in One Night In Miami, he shines brightly with his smooth voice and attention to detail in his physical and emotional performance of someone who is not quite sure what to make of all this much-needed talk on a chaotic society. Aldis, Eli, and Kingsley all turn in knock-out performances as well, each showcasing their true charm in each role with ferocity and kindness all the same as they genuinely take into account each other’s feeling and motives.

Tami Reiker’s (The Old Guard) cinematography reveals the time period perfectly and is able to create a big spatial landscape inside a tiny room with four big personalities flawlessly. And again, much respect to King for taking this one-location stage play and making it feel larger than life on all accounts. One Night In Miami is a movie not to be missed and is fantastic as it is important to see.

WATCH ONE NIGHT IN MIAMI IN THEATERS NOW

WATCH ONE NIGHT IN MIAMI ON AMAZON PRIME 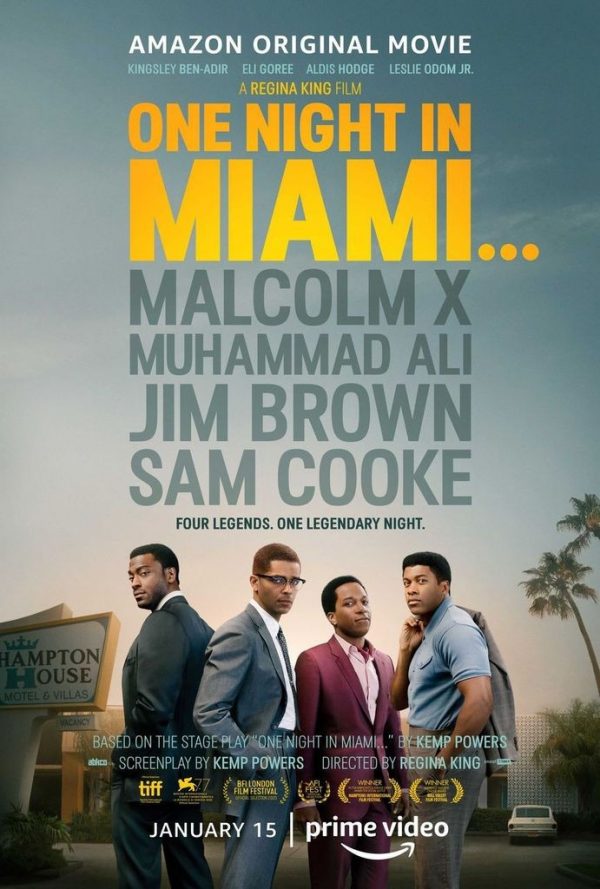