“The Old Guard is a blast.”

This is a perfect Netflix movie and why I hope the streaming giant continues to spend millions on original content every year. An R-rated, high concept, sci-fi, action team origin story starring Charlize Theron that travels all around the globe? Sign me up every time. You may be saying to yourself, “But Dan, Six Underground and Extraction both came out on Netflix this year too.” Well, let me tell you why this movie is vastly superior to those two… two words… Charlize Theron. Don’t get me wrong I love Ryan Reynolds and Chris Hemsworth and their Netflix movies were entertaining but The Old Guard is elevated because Charlize is so overqualified for this role and the director focused on the characters first, action second.

The basic gist of The Old Guard is that Theron and her team are timeless warriors who can’t die. They basically have Wolverine powers and over the years have become mercenaries who take jobs trying to do some good in the World while avoiding detection and capture. When a new person wakes up realizing she can’t die, the team risks it all to find her in order to protect her and themselves from a technology company trying to capture them for experiments.

The Old Guard was directed by Gina Prince-Bythewood who did Love & Basketball and Beyond the Lights. Those are not bloody action thrillers with immortal mercenaries so I was surprised when I read that she was the director of this movie. After the movie ended it made so much sense as to why she was chosen for this project. Gina Prince-Bythewood can make you care about characters, their inner-struggles, their conflicts, and their relationships to one another in the story. So many action movie franchises gloss-over the important step of making your audience care about the heroes which is something that Bythewood had no issue doing. Unlike Extraction or Six Underground where I didn’t care about any of the characters beyond who will they have to kill next, the direction in this movie allowed for some quieter moments leading me to actually be interested and invested in the character arcs.

It doesn’t hurt that the cast in this movie is incredible. I can’t stress enough how amazing Theron is in her role. She is a complete badass, strong leader, and conflicted hero as Andy. The newcomer to the team is played by Kiki Layne in the first role that I have seen her in since If Beale Street Could Talk and she shows her range in so many ways. As the person in the film who the audience has to learn about these powers through her acting carriers so much weight in getting us to care and she portrays such a reluctant and understandably scared person at first and by the end is another complete badass fighting alongside Charlize’s character. 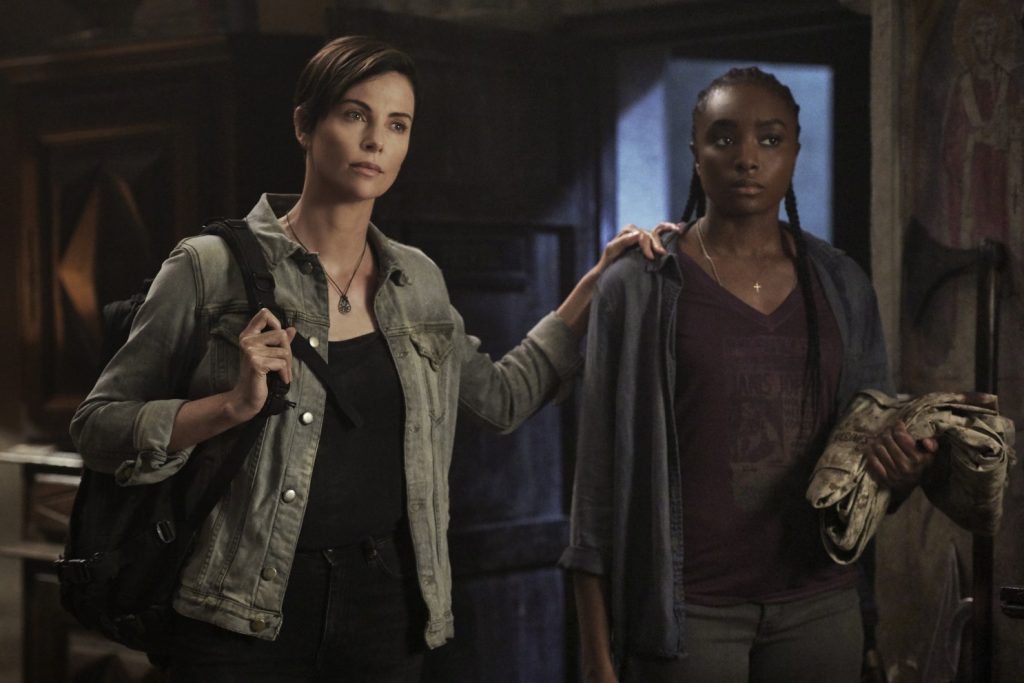 Matthias Schoenarts as Booker, Luca Marinelli as Nicky, and Marwan Kenzari as Joe. Chiwetel Ejiofor turns up as the main antagonist to the team and does a lot with his limited screen time. This movie was shot and filmed prior to the pandemic and a lot of the casting movements that emerged earlier this year calling for more representation in Hollywood. I only point that out because it stars two women, one of whom is a woman of color, two of the male members of Charlize’s team are in a centuries-old romantic relationship and the villain is played by a person of color. All of this was done in a way that never felt like it was pandering. It just goes to show you that casting talented actors in the roles is so important to creating a better viewing experience.

The Old Guard is a blast. It is a smart action movie powered by a supremely talented cast and directed by someone who cares about telling a story. It sets up a sequel that I am truly excited for because these characters are worthy of having more adventures together and I want to watch them. If none of this convinces you to watch the movie maybe this will: Charlize Theron runs out of bullets and uses some Viking ax to kill people in an old church.

WATCH THE OLD GUARD ON NETFLIX