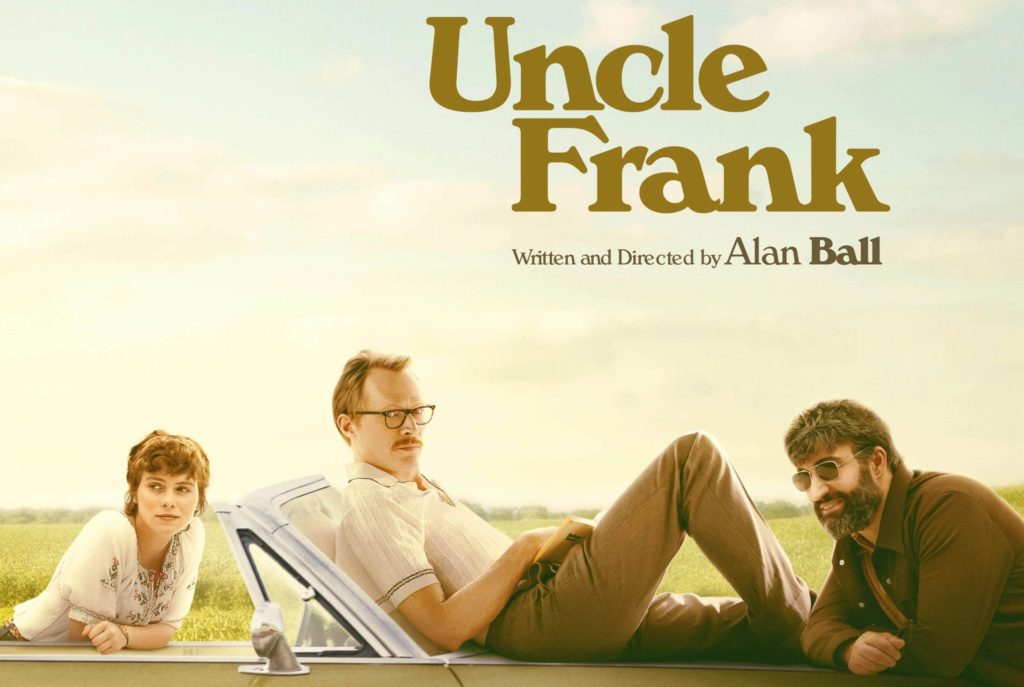 “The characters are fully fleshed out, driven, and become part of the family in this tear-inducing dark comedy called Uncle Frank.”

It’s always a big deal and a wonderful treat when filmmaker Alan Ball releases something new for the world to watch. This time around, Ball has written and directed Uncle Frank, a film set in the 1970s about a gay man who takes a road trip with his teenage niece back home for a funeral with his boyfriend in tow, as he confronts the abuse and horrors of his past. Like any other Ball project, these characters are fully fleshed out, driven, and become part of the family in this tear-inducing dark comedy, despite some heavy-handed messages and force-fed cheesiness the likes of This Is Us.

Alan Ball burst onto the scene with his script of American Beauty, which won a ton of awards. After that, Ball created the hit HBO show Six Feet Under followed by True Blood, where he served as series creator, director, writer, and producer for both series. Until now, Ball has only written and directed one other feature film – 2007’s Towelhead, but has now come back with Uncle Frank in a gracious way. The characters in Six Feet Under instantly grew as part of the family and through its five seasons, the attachment was so large that when the show ended, a sense of real loss was encountered. To an extent, the same feeling happened with True Blood, but the point is – Ball is a wizard when it comes to creating and developing his characters for his projects and the same can be said for this new movie Uncle Frank.

The film introduces the Bledsoe family led by Daddy Mac (Stephen Root) and Mammaw (Margo Martindale) in the 1960s where the young Beth is trying to figure out her lot in life as she doesn’t seem to fit in anywhere or with anyone. The only person that understands her is her Uncle Frank (Paul Bettany) who is stylish and fun. Something sets off Daddy Mac in a fierce way, which jumps the film several years later to where Beth (Sophia Lillis from the Stephen King’s It films) to New York to study at the university. She receives a call from her parents (Steve Zahn and Judy Greer) back home in South Carolina that Daddy Mac has passed away that prompts her to hitch a ride with her Uncle Frank to whom she finds out is gay and has a boyfriend named Walid (Peter Macdissi who played Claire’s art teacher Olivier in Six Feet Under), who travels back home with them for support, specifically tailing in another vehicle behind them.

It’s here where both Frank, Beth, and Walid come to terms with their past as flashbacks and poignant reflections bring up tortured history for all three of them. The young Beth realizes why her family mostly shunned Frank and never really interacted with him and why she herself has had a difficult time growing up, along with Walid wanting to know why Frank won’t introduce him or come out to his family who thinks he lives with his girlfriend, not to mention Walid’s escape from the Saudi culture that would murder him for being homosexual. As the trio gets closer and closer tot heir destination, these characters seem to have real epiphanies with themselves in embracing themselves as they are, as do the other supporting cast who were seen as bigots and homophobes are now turning the other cheek in some form or fashion, baked in love and acceptance that culminates in a tear-jerking episode at the cemetery.

These characters are so likable as with any Alan Ball outing, but the script and on-the-nose camerawork that raises the cheese factor high above a mountain that feels like an unearned faux carnival of emotions that is usually seen on network prime-time dramas (This Is Us, Grey’s Anatomy). There are a few sequences that don’t fall into this category, but the film plays it safe and slithers under the heartstrings and pulls at the perfect times. The performances by everyone involved are incredibly nuanced, especially from Bettany and Lillis who go through an emotional nosedive through most of the film. Uncle Frank has issues, but the good outweighs the bad here.