The Boys in the Band – Film Review!

“The Boys In The Band is a wonderful Must-See on Netflix!”

A brand new adaptation of Mart Crowley’s stage play The Boys In The Band lands exclusively at Netflix from Broadway and film director Joe Mantello and produced by Ryan Murphy (American Horror Story, Nip Tuck). The original play graced the small theatres across New York in 1968, which spawned a film adaptation of the same name two years later by The Exorcist director William Friedkin. Some 40 years later, the subject matter here is still all too relevant where a group of gay men gathers in 1960’s New York for a birthday party that turns into a search for acceptance and maturity of being alright with one’s sexual nature, gender, and orientation at a time where it wasn’t a good idea to be LGBTQ proud for fear of violence and abandonment.

In what seems similar to The Big Chill for modern audiences, a group of friends all head to Michael’s (Jim Parsons) apartment for their friend’s Harold’s (Zachary Quinto) birthday. Staying with Michael is his stoic roommate Donald (Matt Bomer), and rounding out the guests are Larry (Andrew Rannells), Emory (Robin de Jesus), Hank (Tuc Watkins), Bernard (Michael Benjamin Washington), and a male gigolo called Cowboy (Charlie Carver) as a gift for the birthday boy. To throw a wrench into the system, Michael’s old college straight roommate is stopping by for a drink that allows Michael to show his secret self-hatred of being gay, which sprays to everyone having “come-to-Jesus” moments with their friends and themselves through a series of emotional talks, fights, and music. 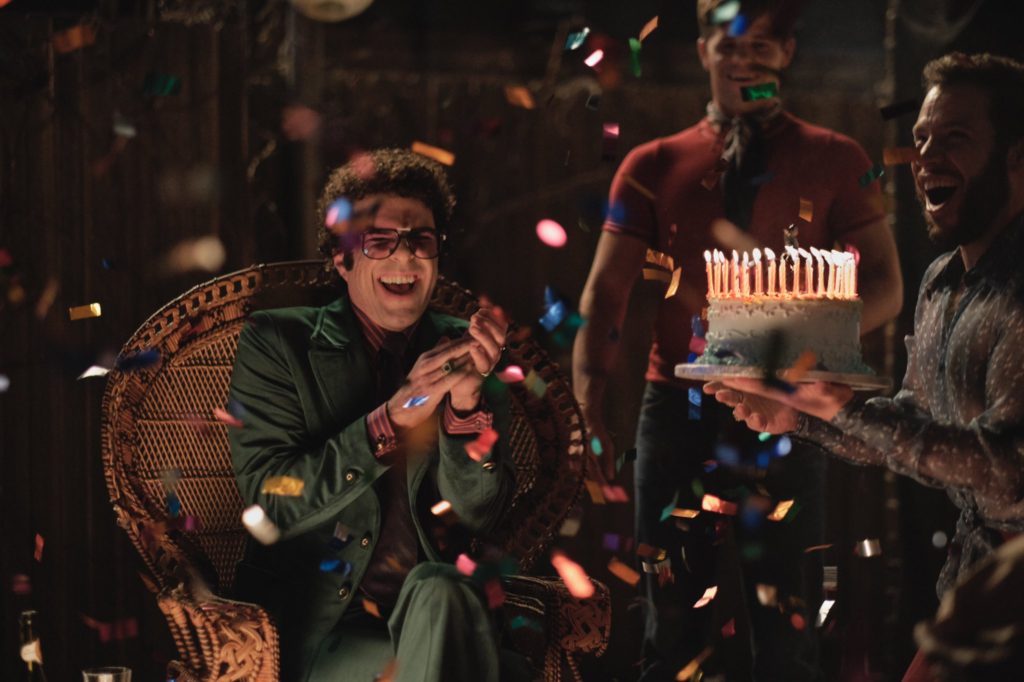 What’s so wonderful about this story, yet tragic is how self-hatred can spread like a wildfire to others. These men at the party are there to have a good time, laugh, eat, drink, and more, but it’s with Michael’s insecurities about himself that completely ambush and bring the party down to a screeching halt and the film as well as Parsons showcases perfectly his internal conflict of making the right and wrong decisions of how to bring up sensitive subjects. The truth is, everyone is vulnerable here, but everyone hides it in a different way. Where Emory might be the loud, happy belle of the ball, Bernard is constantly high on marijuana and dry with his humor to keep their secrets at bay. Larry and Hank are having issues with a monogamous relationship and saying out loud they love each other, while Cowboy just has a happy grin on his face, but accepts who he is no matter how dumb he might present himself. But it’s with Michael who can’t let anything go as he tries to make his friends act straight for his college roommate who might have a dark secret of his own.

The casting is outstanding here, with almost the entire cast being gay in real life which adds some authenticity to the psyche of their characters and emotions because it hits close to home. The script is rapid-fire like a Gilmore Girls episode, but with much more at stake here with great references to film and the stage along with some truly emotional and heartwarming moments. For a film that takes place almost entirely in one room, nothing ever feels claustrophobic or small, but rather larger than life with the cast of characters as they navigate their turmoil. The set design and costumes evoke the perfect era of the 1960s along with one hell of a score and soundtrack.

The Boys In The Band is a wonderful Must-See on Netflix!

WATCH THE BOYS IN THE BAND HERE!