“Honest Thief is entertaining and a fun way to spend 90 minutes.”

Honest Thief is another simple Liam Neeson action thriller that delivers exactly what you have come to expect from him at this point in his career. In normal times, movies like Honest Thief would probably come out in early January and be forgotten before February until it premiered on HBO in the fall and you caught it on a Saturday afternoon. We are at a point with Liam Neeson that his movies are becoming so blurred at this point it is staggering. Every single one of his action thrillers involves him being wrongfully accused and on the run trying to clear his name or at least stay one step ahead of the bad guys. The thing is that Neeson is so damn fun in these roles that the continuous plot repetition doesn’t phase me. Honest Thief is destined to be a failure because people simply aren’t going to the theaters for any reason but if you find it streaming on-demand in a few weeks it is worth a mindless watch.

The plot of Honest Thief is exactly what you would expect. Liam Neeson plays Tom who is known as the In & Out Bandit around the region. The bandit has been robbing small banks for years and nobody knows who he is. After Tom meets Annie (played by Kate Walsh) he starts a relationship with her. Annie and Tom meet at a storage unit rental facility where Tom is looking to rent a unit for his money. After a year of dating, Tom decides (for many reasons) that he wants to turn himself in so he doesn’t have to lie to Annie anymore. Tom calls the FBI and of course, no one believes him but after two young FBI agents do some digging they decide to steal the money and frame, Tom, for murdering their boss. Tom has to go on the run, while protecting Annie, and clear his name.

The two villainous FBI agents are played by Jai Courtney and Anthony Ramos who don’t have much to do beyond being outplayed by Tom at every point in the story. Jeffrey Donovan plays an FBI Agent who believes Tom may be innocent and works with him throughout the movie. Donovan has a very strange side plot involving his dog that he just won in his divorce hearing and he apparently has to bring it to work with him which is pretty amusing. Despite this solid cast, there are no really memorable scenes that can be found in most of Neeson’s previous work There is no standout action sequence or even outlandish action sequence that is worth mentioning. Even Cold Pursuit had some truly hilarious/insane action sequences to get a viewer through the runtime. This one just had nothing to write home about in the action department and it is getting tougher to buy Neeson in a physical altercation as he approaches 70 years old. 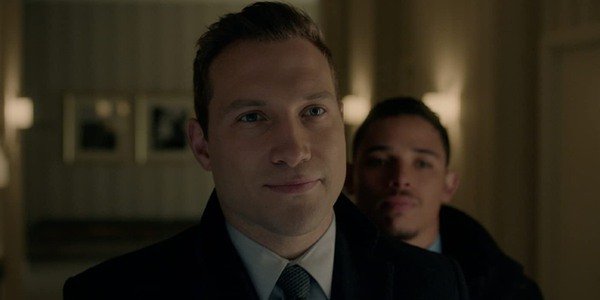 There is really no way to spoil this movie. You know Tom will defeat the bad guys and clear his name. What was truly mind-boggling to me was that he insisted on turning himself in at the end and forcing an agreement that he would only serve two years if he returned the money! Why? Why didn’t the good FBI agent just let him go free? Why would Annie stay with him after he lied to her and is now a broke liar going to prison? I know these Neeson thrillers are built on flimsy premises but this one was just insane. Every character’s motivation was truly laughable. That being said, I didn’t hate my experience. There was something about watching a new Liam Neeson action movie that felt good. I was entertained and it was a fun way to spend 90 minutes.