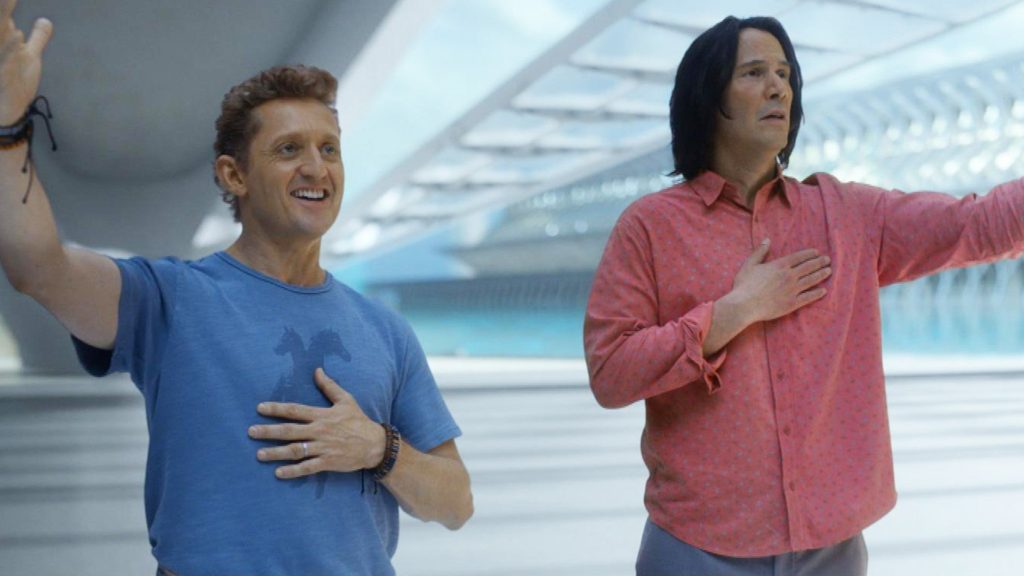 “Bill & Ted Face The Music is a ton of fun and is most triumphant.”

Throughout the centuries, there has always been brutality and war, fascist government regimes who aim to hurt people, and most recently – the current political and social climate that has boiled over into bloodshed and hatred. Luckily, there are flashes of excellent victories of peace and friendship due to the excellent friendship of San Dimas locals Bill & Ted. Their most Excellent Adventure saved the world with them traveling through time, collecting historical figures for their history report, and their Bogus Journey had them crossing paths with Death, God, and Satan as they traveled through heaven and hell, only to come back and play a song to unite the world in harmony. Now almost thirty years later, this everlasting duo tackles their most heinous adventure yet in Bill & Ted Face The Music as a now older Bill & Ted must play a newly written song that would save the universe, reality, and time before it implodes on itself, destroying all life. Bringing back cast and crew along with some heartwarming messages, this third film is a ton of fun and is most triumphant.

Bill & Ted Face The Music has been in development for around ten years with Dean Parisot (Galaxy Quest, Red 2) coming aboard to direct with the original writers Chris Matheson and Ed Solomon returning for one more script with this likable duo. The result is a quick, funny, and musical journey to save the world with the addition of Bill & Ted’s grown-up daughters Billie (Bridgette Lundy-Paine) and Thea (Samara Weaving) taking on some very similar personality traits to their fathers who are still married to the princesses from the 1400s. 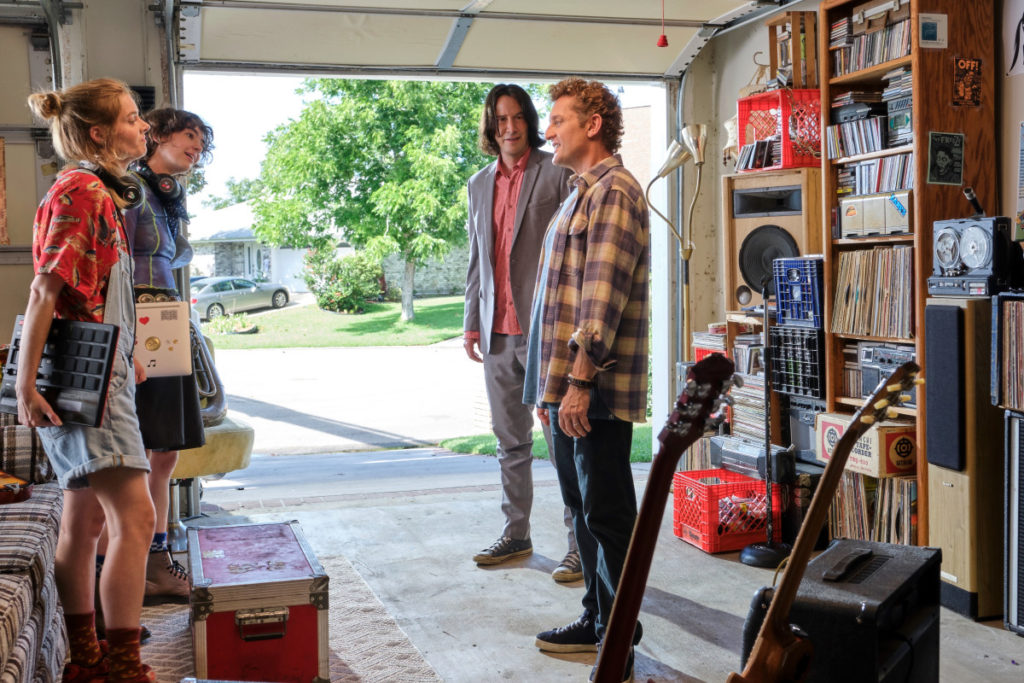 At the beginning of the film, Bill & Ted are in a marriage rut with their wives, even seeking some couples counseling together, where it sheds a light on just how close these friends still are. After the events of Bogus Journey and their hit songs and albums with Death (William Sadler), the band broke up, and now Bill & Ted are playing in small lodges to only a handful of people. Their daughters don’t play instruments but are an encyclopedia of knowledge of all music that comes into play later on in the film. Soon enough, a futuristic citizen (Kristen Schaal) travels back in time and tells Bill & Ted that their son can save the universe and unite everyone once again if they play this certain song at a specific time in a particular place, which is in the next 90 minutes or so. It’s too bad the song hasn’t been written yet, thus propelling Bill & Ted to head through time to try and figure out what song to play live. Meanwhile, their daughters are traveling back in time, and collecting the best musicians to form the ultimate band for the live show that all culmniates in a heartfelt song of love and friendship that evokes their famous words, “Be Excellent To Each Other”.

The film runs by at a quick pace without the story headed off its beaten path. Filled with some time travel humor, the iconic dialogue that Bill & Ted most eloquently speak, along with some great cameos, both musically and from past films. There’s even some throwback winks that pay homage to certain scenes which all play out nicely. Sadler rejoins as Death, which is such a treat and hilarious with his minimal screen time. There are even some newcomers to the game, most notably an evil Terminator-like robot sent to kill Bill & Ted by the name Dennis Caleb McCoy, who steals every scene with his love for Bill & Ted.
Keanu Reeves and Alex Winter are still a blast to watch in these characters and return as no time has gone by. They look wonderful. Bill & Ted Face The Music is funny and heartfelt with a killer soundtrack.