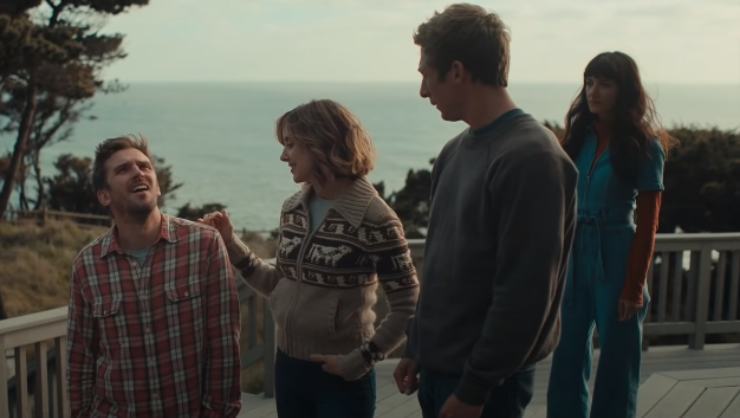 The Rental is the directorial debut of Dave Franco which focuses on a quick weekend getaway for two couples in the Pacific Northwest. The setup of this horror film really preys on the fears of staying in a stranger’s home and hiding secrets from your spouse. As the weekend gets more and more intense the emotional fears and lies become overshadowed by a more physical threat watching the couples’ every move from the dense Oregon fog. A slow burn at first, Franco’s thriller really kicks it into high gear for the final third of the movie where all the decisions you watched for the previous hour pay off in really believable ways as these four vacationers try to survive the night.

The movie stars Alison Brie (Michelle), Dan Stevens (Charlie), Sheila Vand (Mina), and Jeremy White (Josh) who all turn in good performances. Charlie and Mina are work colleagues who get some sort of funding for their project that prompts a celebratory weekend away in Oregon. Charlie is married to Michelle and Mina is dating Charlie’s brother, Josh. This web of familiarity lends itself to some awkwardness and trust issues as both couples have to deal with the fact that Charlie and Mina also have their own work relationship.

I had never seen the actors who play Mina and Josh before and I found them to be very believable in their interactions with each other, especially when secrets started to be revealed. Alison Brie as Michelle had the opportunity to really shine as a somewhat uptight character who really lets loose one night thanks to some ecstasy. Brie also got to show off her acting chops when confronting the internal and external conflicts the weekend revealed especially opposite Dan Stevens. In fact, that brings us to Dan Stevens who just continues to excel in so many different roles and seems to be so overqualified thanks to his endless range. This guy was a murderer in The Guest, A fancy guy in Downton Abbey, the Beast in Beauty & The Beast where he sang, a severely disturbed hero in Legion, etc. He just keeps finding new challenging roles and kills it in all of them.

Franco utilizes his actors and the slow burn start to the film to clearly define the characters, their relationships, and the dynamics. By taking the time to do this without wasting a single shot or line of dialogue was efficient and smart filmmaking. By the time we reach the disturbing parts of the movie where characters have to make stressful decisions we buy into their way of thinking and exactly why they are doing what they are doing. This careful decision elevates the movie from typical horror fare where part of the audience job always seems to be rolling our eyes at the decisions of our main characters because their characterization never expands beyond “Jock” or “Pretty Girl 1”.

The premise was also really smart. As someone who has personally rented an Airbnb with another group of couples, I can assure you that the tension and frankly, awkwardness can linger or explode over the smallest things. The beautiful part of this movie was how it portrayed the remoteness of not only the rental house but the situation itself. You are in the middle of nowhere with other people until you all leave together in a few days… that doesn’t leave a ton of room for conflicts to be solved maturely! Just all around great tension building before it blows up toward the end with slasher elements.

I truly enjoyed this movie start to finish. It reminded me of The Invitation with a side of The Strangers which are two of my favorite horror movies of the last 10 or so years. I don’t think Dave Franco needs any praise from me considering he is a famous actor, producer, and is married to Alison Brie but I really think he did a great job writing and directing this movie. As I said in my last horror movie review, sure we are stuck at home on the couch but sometimes a weekend vacation can be way, way worse!