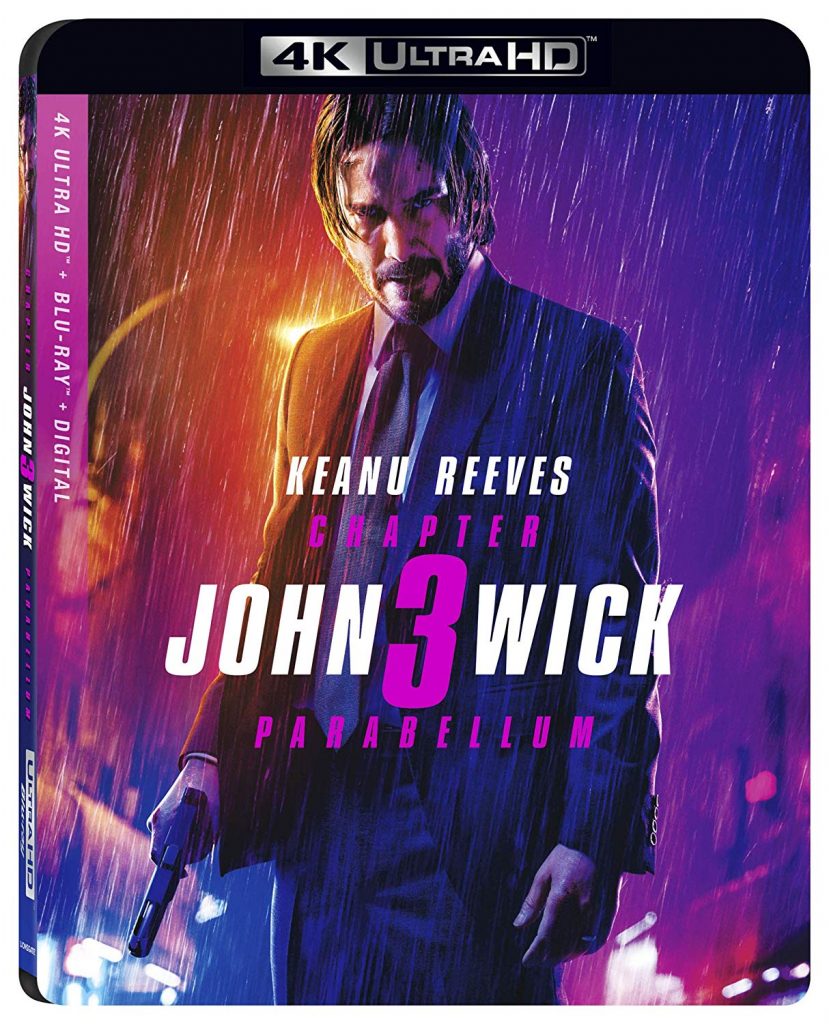 In a surprisingly thrilling movie franchise that started in 2014, the John Wick character and films have made a significant impact on movie-going fans and the action genre. Now into its third film titled John Wick 3: Parabellum (Latin for “Prepare for War”), the filmmakers have spared no expense and creativity in giving us the best action movie for Keanu Reeves and this creative universe they created only five years ago. I would expect situations to get tiresome in a third adventure, but that’s not the case at all here. There are so many different aspects to the fight scenes that we haven’t seen before, along with some great, new John Wick assassin universe knowledge that makes this unique and deadly world seem much bigger than it is.

The film takes place right where Part II left off, with John Wick rushing to get out of New York City before his suspension takes effect. He has 20 minutes to get to safety before he is not allowed into any of the luxurious hotel hideouts, access to weapons, and on top of that – a multi-million dollar bounty on his head that has every single other assassin trying to kill him. Meanwhile, the “corporation” that runs this worldwide club of assassins known as the High Table has come to collect the mistakes that John Wick made in Part II and make sure Wick is dead.

This puts Wick across the globe in Casablanca where he asks for help from one of his old cohorts Sofia (Halle Berry), who comes with a pair of cute, yet ruthless German Shepards who will take you out from the neck to nuts in a split second. John’s mission is to meet with someone in the desert that can bring him back in good graces with the High Table, which then sends him back to New York for many final showdowns, including the High Table’s deadly assassins led by Cecep Arif Rahman and Yayan Ruhian (The Raid and The Raid II), along with their boss Mark Dacascos.

In between the unbelievably good action sequences, we get to witness more mythology in this assassin universe, what makes it run and tick, along with where John Wick trained, grew up, along with several other people he might have done some killer things with, including the lovely Angelica Huston, who seemed to have raised our hero. These rules, traditions, and executions are done in a subtle way as they don’t fully explain the history of this elite club, but it’s just enough to know that John Wick is the most popular and most successful assassin out there. This is also evident when Rahman, Ruhian, and Dacascos cross paths with him, as they comedically are in awe of John Wick, but still try and put him on ice.

The new mix of comedic interactions and over-the-top performances from Dacascos and Laurence Fishburne here are much welcome in this universe because we get to see both sides of their personalities. One is a cold-blooded killer for hire, and the other is basically a fanboy for their assassin idol who they get to work with. It’s such a delight to see. The new action sequences bring in various animals, the most epic knife fight in cinema, motorcycles, and more to this highly entertaining third film.

The filmmakers are aware of the popularity, the fun they can have, and their characters traits that I hope they make three more films in this universe with the same people. As evident at the end of the film, you can rest assured there will be more carnage and enjoyment soon.

Lionsgate shoots its way in the door with John Wick 3: Parabellum with a 4K Ultra High Definition transfer in 2160p with an added Dolby Vision enhancement. This is the ultimate way to watch all of the carnage and gun-fu unfold on screen with an upgrade in color and detail.

There are some fascinating highlights with the Dolby Vision color palette, given the heavy stylized color scheme throughout. A lot of the film has a cool temperature look with varying shades of blues and silvers, evident of gunmetal. These color are amplified in different lighting conditions, whether in an antique weapons store or at the Intercontinental hotel. Other colors of praise are inside the ballet theatre with very warm colors of red, yellow, and orange, which signify a former home for John Wick. When overseas in the desert, some other warmer colors along with muted greens brighten up the screen too. Then, in a climactic battle scene, we get that famous Matrix neon green in the hotel, which is a sight to behold. Black levels are rich and inky with no issues of crush or shadows. You’ll be able to distinguish the darkness of the city alleyways from Wick’s black suit easily.

The detail is sharp and vivid in this 4K presentation, which is a slight upgrade from the Blu-ray 1080p version. Individual black hairs on Wick’s beard stand out nicely along with some facial scars and even small wrinkles. The threads in his suit show wonderful textures too. The two fantastic heroic dogs look excellent in the low-lit settings that showcase their fur well. Background items, vehicles, and motorcycles all have that pristine look to them with the right amount of shine, whereas other locations might show wear and tear along with dirt. It’s a phenomenal looking image that has no problems with banding or aliasing.

This is one 4K Dolby Vision presentation that you’ll be happy to be a part of.

The Dolby Atmos track with John Wick 3: Parabellum is out of this world. Right from the get-go, we get a large sound from the height speakers with a thunderstorm and hard rain that pours on in. This quickly establishes what’s to come quickly for the rest of the film. The sound design is robust and loud with a ton of gunfire, of course. Each gun blast has the necessary reverb and echo that packs a powerful punch. Each bullet flies by with each speaker smoothly and with a force that has excellent directionality. The numerous bone breaks and takedowns are full of depth and a low end of bass that never sounds rocky or overblown. It’s all perfectly balanced.

The vehicle chases have thundering engines that rev along with debris from walls and ceilings that fall down after each missed gunshot. Every kick, punch, and grapple can be heard easily and has many different realistic sounds and not just the same canned noise. Everything you hear is dynamic and full of life and chaotic violence. The music always adds to the suspense and action-packed sequences, while the dialogue is always clear and easy to follow. Oh, what a wonderful sound design in Dolby Atmos.

There are quite a few fun bonus features here, including behind the scenes stunts, EPK-like interviews, and more. In all, there are about 90 minutes of extras.

Parabellum: Legacy of the High Table (HD, 11 Mins.) – A fun EPK piece that has interviews with the cast and crew discussing the third film’s story arc and its characters.

Excommunicado (HD, 10 Mins.) – More interviews with the cast and crew talking about John Wick being banned from the assassin world.

Check Your Sights (HD, 10 Mins.) – Again, more interviews with the cast and crew focusing on the big action sequences in the movie.

Saddle Up Wick (HD, 5 Mins.) – There is some horse-fu in the film and this bonus feature looks at making that a reality.

Bikes, Blades, Bridges, and Bits (HD, 7 Mins.) – The large set pieces and history of the franchise are touched upon here.

Continental in the Desert (HD, 10 Mins.) – Traveling to Morocco must have been fun and this shows the cast and crew filming on location there.

Dog Fu (HD, 8 Mins.) – Easily the most fun extra on the release, which looks at the training the dogs and actors went through with the puppies of the film.

House of Transparency (HD, 7 Mins.) – The big production design budget is front and center with a ton of detail.

Shot by Shot (HD, 9 Mins.) – It’s all about the editing in this piece, where the editors and filmmakers talk about cutting through all the carnage to make the perfect fight scenes.

Trailers (HD, 6 Mins.) – Two trailers for the film along with the video game John Wick Hex trailer is on display.

John Wick 3: Parabellum is my favorite of the series so far. The action sequences are bigger and better, and we get a ton of new insight into Wick’s past and more info on this large assassin world. There are some of the best actions scenes ever made and Keanu Reeves is just perfect. The 4K UHD Disc with Dolby Atmos and Dolby Vision are demo-worthy and the extras are all worth your time. HIGHLY RECOMMENDED!