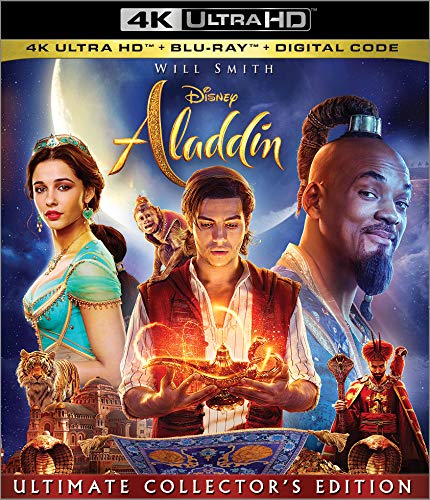 Of course, Disney is on top of the world right now. Their multi-billion-dollar box office numbers are astounding. The studio is releasing a ton of movies a year from kids films and Star Wars to Marvel superhero action blockbusters. This also includes live-action remakes of their beloved classic animated movies. Even though these remakes started a long time ago, their first real, big step into this medium was in 2015 with Cinderella (I hated it). From that terrible motion picture, albeit a strong financial success, we have gotten multitudes of these live-action movies with The Jungle Book, Dumbo, Beauty and the Beast, The Lion King, and of course now Aladdin (a remake of the excellent and most-treasured 1992 animated movie).

Director Guy Ritchie (Snatch and Lock, Stock, and Two Smoking Barrels) is behind the camera and offers no real new or original look to the movie. In fact, like the rest of the live-action remakes for Disney, it’s an almost shot-for-shot re-telling with zero imagination or original idea. While the animated classic runs in at 90 minutes, this live-action is a bloated two-hour affair that would rather pay attention to luxurious set designs than any sort of decent narrative or character development.

You know the story to Aladdin by now, so I’ll save you the pomp and circumstance of the plot, but coming in at 30 minutes longer than the original, there are a few added elements, none of which are worth exploring. Whatever magic and expressiveness the animated film had is completely lost here with real actors and a live-action vibe, with the exception of Will Smith as the blue genie (kind of).

Marwan Kenzari plays the evil Jafar and sticks to a one-note villain who is as boring as they come. Instead of playing into their realistic approach, Kenzari tends to go over-the-top instead of playing a true bad guy. But that’s the case with the entire film. Ritchie would rather show you how expensive the costumes and set pieces are than form any sort of character or plot. It’s all surface material, which is a shame.

On the other hand, though, Will Smith looks to finally have fun in a movie. There was a time where Smith genuinely loved being in films and wasn’t worried about winning Oscars. He’s taken a step back from that and has gone all out with his genie performance. By no means is this a comparison to Robin Williams, but in Will’s own way and Big Willie Style, he excels as the flamboyant blue genie and is a treat to watch on the screen when he isn’t playing a serious angle. There’s a scene where Genie is trying to help Aladdin not be awkward in front of the princess and her father that evokes the best comedy of the film with Will’s comedic timing. Other than that, expect nothing short of dull and uninspired remakes of your favorite songs and long stretches of half-baked scenes.

Each set looks exactly like a Hollywood set. Fake and canned, just like the auto-tuned singing. You’ll feel like you’re watching a made-for-tv live broadway play in most instances, which takes you out of this “whole new world”. This live-action Aladdin movie is not good whatsoever, but seeing Will Smith having fun in a movie makes me happy and that’s a step in the right direction.

Disney flies its magic carpet with Aladdin in 4K UHD with the enhanced HDR10 color boost. This 2160p transfer has a darker palette when compared to the Blu-ray 1080p version. It has slight necessary upgrades in detail and color, but it’s not a revelation. With the HDR10, the blue genie effects have a more pronounced hue with some of the blue dust and magic coming in darker. With the Blu-ray, these blue effects are much brighter.

The gold and jewels found inside the cave give more of shine as the characters walk across it, contrasting nicely with the icy cool palette around them. When not in the cave, the color scheme is orange and red, because of its sandy setting. Opulent colors in costumes ranging from the brightest greens to the most luscious of pinks and everything in between to give a wonderful eye-buffet of colors. It’s a strong colorful presentation for sure that can accentuate golds and whites in low-lit settings nicely.

Detail has a small uptick with some vivid and sharp closeups that reveal individual strands of facial hair, makeup effects, and even CGI effects of feathers on Iago and blue genie dust, along with fireworks. The wardrobe is extravagant and showcases all of its textures and jewels. Wider shots are nice, but I didn’t see much of an upgrade there.

Lastly, black levels are deep and skin tones are natural without any issues of banding, aliasing, or noise. Overall, this is a good looking UHD presentation, but it won’t turn any heads. 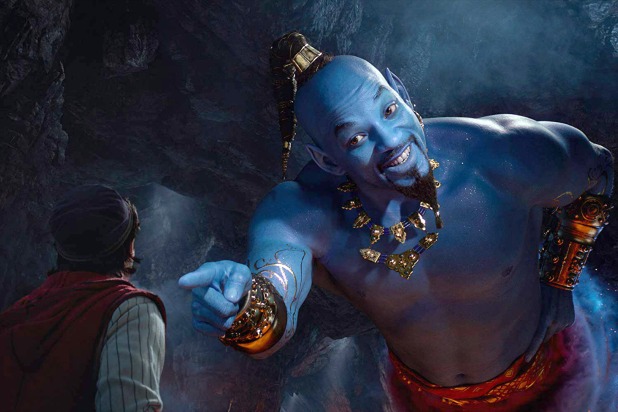 Like most Disney releases, Aladdin’s Dolby Atmos audio track requires you to turn up the volume knob higher than you would any other movie. I’m not quite sure why this element hasn’t been fixed yet. That being said though when the bigger action and musical scenes are in play, the Dolby Atmos fully delivers with every note, sound effect, and ambient noise, providing a fully immersive experience.

The height speakers give way to falling debris inside the cave and all of the magical spells the genie casts towards his new best friend. These quick spells flow smoothly through the speakers with excellent directionality. The big boom of fireworks or a certain elephant stomping on the ground showcase the low end of bass nicely as to does a climactic scene in the end where Jafar becomes all-powerful. It’s a solid listen for sure.

The music is a big part of the movie and each instrument and percussion sound is precise and well-balanced for a full sounding experience. Dialogue is clean and easy to follow along with and free of any issues. Again, you’ll have to adjust the volume knob higher to get the needed effect, but when in place, you’ll be satisfied. 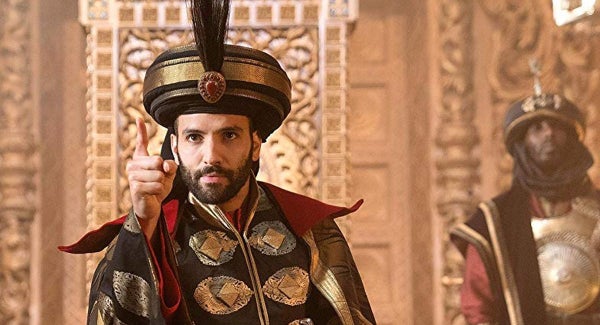 The bonus features include a few short featurettes with interviews with the cast and crew about the shoot, a deleted song, music videos, and bloopers. In all, there are about 48 minutes of extras.

Aladdin’s Video Journal: A New Fantastic Point of View (HD, 11 Mins.) – The actor who plays Aladdin journals his time on set with his camera phone, along with some other interviews from the cast and crew and B-roll footage.

Guy Ritchie: A Cinematic Genie (HD, 6 Mins.) – A focus on the director Guy Ritchie, where the cast and crew talk about the filmmaker and his vision.

A Friend Like Genie (HD, 5 Mins.) – Will Smith discusses playing the integral role of Genie and brings up Robin Williams.

Deleted Scenes (HD, 11 Mins.) – There are six total deleted scenes, none of which are impressive, besides a funny one about yam jam.

Music Videos (HD, 12 Mins.) – There are three music videos from the film here, performed by other musicians. 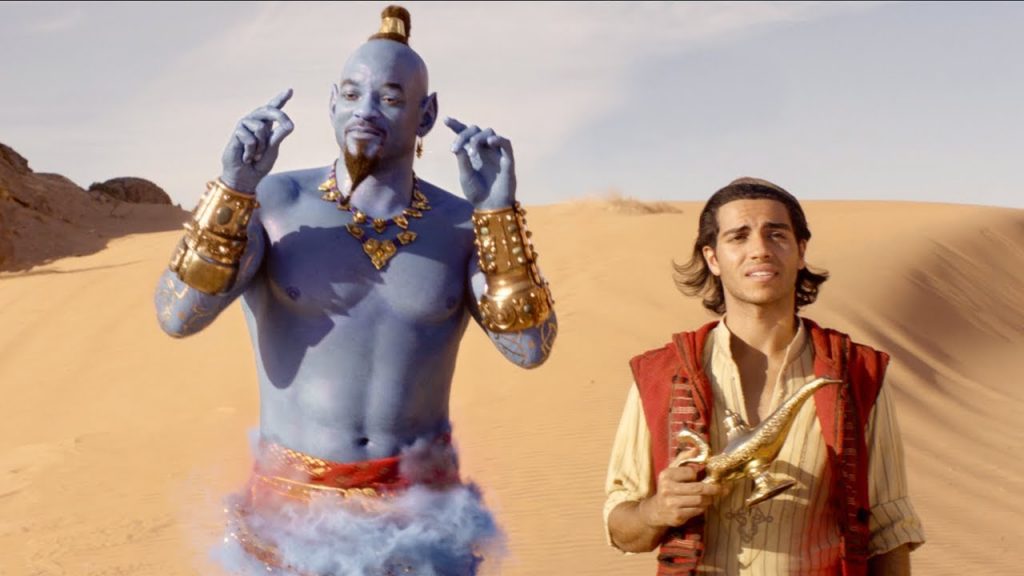 This live-action Aladdin is just like the rest of the Disney movies that are being remade. Just plain bad. Just everything is worse in this version and nothing is improved upon. Not worth the time whatsoever. That being said, the 4K UHD and Dolby Atmos are both serviceable and satisfying. The bonus features are short and offer no real insight or information, but rather fluff and music videos nobody wants to listen to. Skip this one and purchase the original animated film from 1992.