The Ultimate Guide to SummerSlam 2018 – Charlotte Flair vs Becky Lynch vs Carmella! 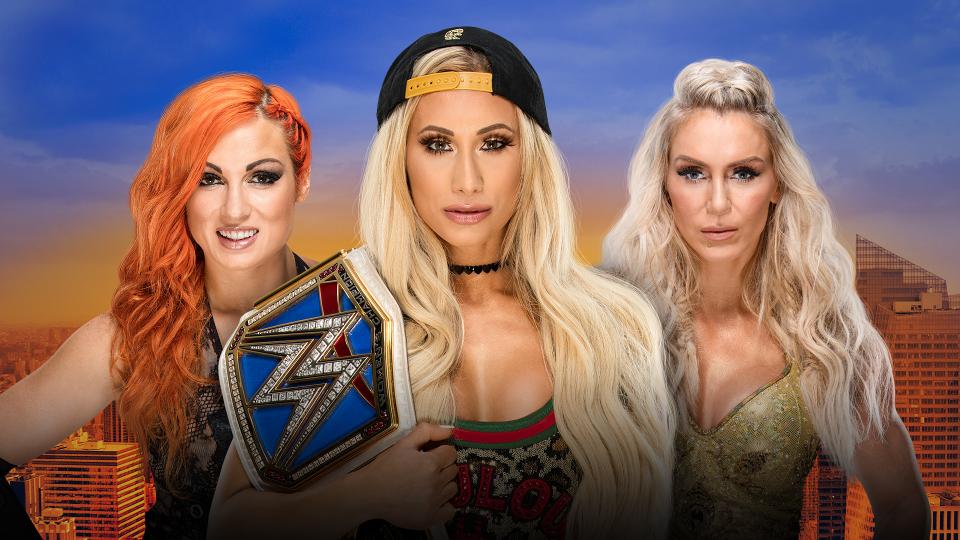 The big summer blockbuster is almost here. I’m not talking about dinosaurs trying to survive an eruptive volcano either. I’m talking about WWE’s 31st annual SummerSlam PPV of entertainment and pro-wrestling, which is set to take place on August 19th at the Barclays Center in Brooklyn New York and can be watched live in HD on the WWE Network for $9.99 a month or for free if you’re a new subscriber. Over the next few days, our writer Angi and I will be conjuring up some entertaining pieces about each match at SummerSlam 2018. We’ll cover each WWE Superstar, the background of the match, the odds of winning, and what to look out for in each match.

First off, this bad boy (or girl?) is a triple threat. That throws the coveted champion’s advantage right out the window. Our Smackdown Women’s Champion, Carmella, doesn’t even have to take the pin or submission to lose her title. Originally set to be a one on one between The Princess of Staten Island and the Lass Kicker, Becky Lynch, plans changed with the addition of the Queen, Charlotte Flair, after she pinned Carmella to earn her spot in the match in Brooklyn.

What Carmella lacks in technical ring ability (when compared to her challengers,) she makes up for in cunning calculating tricks that have earned her victories over more dominant opponents such as Asuka (twice) and Charlotte (twice). Rest assured, the moonwalkin’, trash talkin’ Champion is scheming and planning ways to overcome the greatest threat to her reign yet.

It’s been a long couple years for the first ever Smackdown Women’s Champion. Plagued with losses, the Lass Kicker has battled her way across the world, racking up victories, to earn her title opportunity at Summerslam. Finally, she’s back on track to the gold. She is determined not to let it slip through her fingers and she will not even let friendship stand in the way of becoming the Champion of the Smackdown Women’s division once more!

Does our Queen really need an introduction? She is genetically superior, she is the single best technical wrestler in the Smackdown women’s division, a multi-time champion, and the woman who broke Asuka’s undefeated streak. Returning from injury, Charlotte has done what Charlotte does best, find the nearest gold and go after it.

The night after Wrestlemania, Carmella cashed in her Money in the Bank Briefcase and won the title from Charlotte. From then until now, the Princess of Staten Island has used every trick in the book to keep that belt around her waist. Even using the likes of James Ellsworth to distract and confuse her opponents. Up to this point, it has worked like a charm and she has become a legitimate champion who has proven that there is nothing sacred in the battle to retain.

WWE Universe favorite, Becky Lynch, has been on a hot streak the last couple months. She fought her way from relative obscurity back into a position of #1 contenders for the title she once held. She earned a match against Carmella at Summerslam and was all set to take on the Champion in one on one competition

That is until…. The return of Becky’s best friend and former Champion, Charlotte Flair. On the Queen’s first night back, she was granted the opportunity to insert herself into title contention. Not only did she jump at the chance, she succeeded and Becky’s big solo moment became a Triple Threat Match.

Every woman is for herself. There are no friends. The champion does NOT have to be involved in the decision. The odds Becky walks out champion dropped from 50% to 33%. Needless to say, there is some friction between Straight Fire and the Royal.

The dynamic between Becky and Charlotte. At what point during the match will they stop playing nice and finally unload on each other. When will Becky let the frustration of always playing second fiddle to the Queen boil over into an aggression we have yet to see? Both women are submission specialists. Each is a veteran of the ring. What magic are these two truly capable of in a WWE ring? We are about to find out! 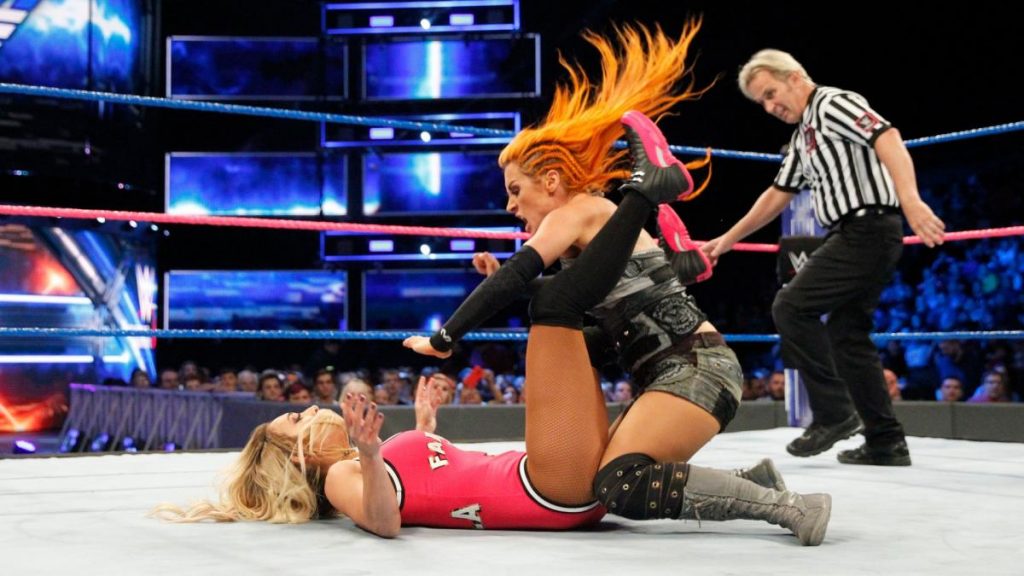 One thing is for sure, all three women will give their all to attain (or retain in Carmella’s case)  the women’s championship of the Blue Brand. Charlotte and Becky will erupt and the two will hold nothing back. This is Becky’s chance to outshine her friend.

This is Charlotte’s chance to reclaim her lost crown, and this is Carmella’s chance to prove herself as a champion by defeating two of the most technically gifted ladies in the division. Charlotte will work on legs for her Figure 8, Becky on arms for her Disarm-Her, Carmella on avoiding both those moves. 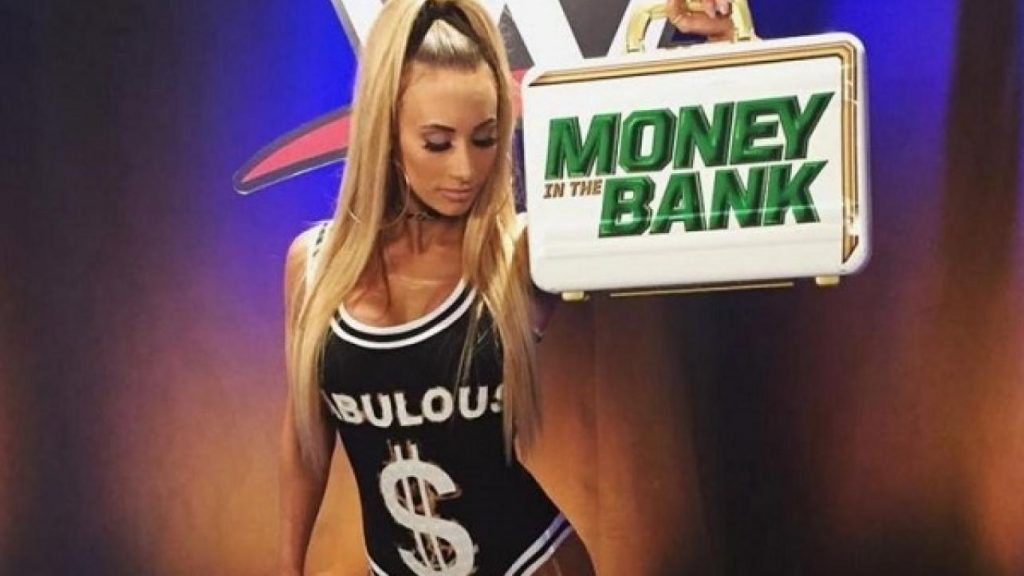 Don’t hate, but I have the feeling Carmella is walking out the champion on this. *hides from the torrent of boos and hisses and thrown rotten tomatoes* Hold up, hear me out!

Everyone, including myself, is all hung up on the drama between Becky and Charlotte. Do you think for one second Carmella isn’t going to use this dissension to her advantage? The woman knows how to survive threats as she constantly reminds us that she beat charlotte flair and Asuka, TWICE! Both of those opponents are more dominant and gifted than she is in the ring yet she pinned them both! Who’s to say, the Princess of Staten Island will allow herself to get beat on, play possum and then capitalize once Lynch and Flair have exhausted one another?

So as much as it grieves me to bet against the Queen, I’m choosing the Princess to retain.