Favorite Movie Scene of the Day #18! 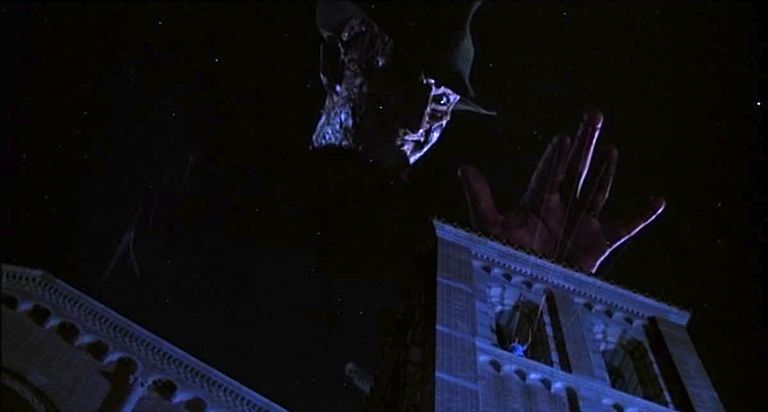 Freddy Krueger has become a household name since he debuted in A Nightmare on Elm Street in 1984. The bastard son of 100 maniacs hasn’t only scared us, but has made us laugh and given us brilliant, yet cheesy one-liners over the years. When compared to the likes of other movie killers like Jason Vorhees and Michael Myers, Krueger has a big personality where he likes to taunt his victims with vicious pranks and insults that come with the best puns and wit. Instead of just chopping up people with a machete or knife, Krueger had the most inventive kills throughout his films as actor Robert Englund always portrayed this burnt up boogeyman with vigor, style, and dynamic comedy. This particular Favorite Movie Scene of the Day comes from A Nightmare on Elm Street 3: Dream Warriors from 1987.

The guy who directed the remake of ‘The Blob‘, ‘Eraser‘, Jim Carrey in ‘The Mask‘, and even The Rock in ‘The Scorpion King‘ made A Nightmare on Elm Street 3: Dream Warriors. Not only that, but original horror maestro Wes Craven and Oscar winning filmmaker Frank Darabont wrote the screenplay. Yes, that Darabont who made ‘The Shawshank Redemption‘. It’s a brilliant film that went through several stages in the creative process, but ended up being about a group of teenagers, notably the last kids of the parents who burned Freddy alive, who all reside in a mental hospital. All of these kids try and survive the sleepless nights of battling Freddy Krueger, including Patricia Arquette’s first film. A young Laurence Fishburne has a role in the film with the addition of the original actress Heather Langenkamp reprising her role as a doctor who tries to help these teenagers.

The scene in question is one of the scarier scenes in the film franchise and has somehow been etched permanently in my brain since I first watched it. I still cringe every time I see it. The scene features a teenage kid named Phillip Anderson, played by Bradley Gregg (Eyeball Chambers in ‘Stand By Me‘), who plays a one of the kids in the mental hospital who has a history of sleepwalking. Once asleep, Phillip comes face to face with Freddy in the form of a marionette, which is a brilliant moment of stop-animation. The marionette turns into the live-action Freddy, where he sadistically slices Phillip’s wrists open with his finger-knives and pulls his veins out and uses them as the strings for a marionette.

Freddy eventually leads Phillip to the top of the hospital and flings him off the building to his death. Those gooey blood-red veins makes me squirm just thinking about it. It’s how the scene was filmed from the perspective of several different characters is what makes this scene amazing. We see the perspective from the helpless other kids, the nurses and doctors, Phillip himself and even a giant Freddy who is playing with his bloody marionette. It’s a fantastic and scary-as-hell scene that is one of the coolest and most inventive kill/death scene in movie history. It also shows just how evil and manically funny Freddy Krueger can be.