Opinion Column: Game of Thrones isn’t great this season and it’s ok to admit that!

Game of Thrones isn’t great this season and its ok to admit that. Come to peace with it. Embrace it. It is still the best looking show on television, with some of the most complicated characters ever seen on screen or page. Even this season the show can reach heights that no other show on television has ever touched, ever. But gone are the reflective moments, the social commentary, the irony, and any emotion. Anyone can make a spectacle. Hollywood is never short on spectacle. You can have a movie with superheroes, giant robots, etc. and you won’t find anyone with a pulse who won’t admit that is kind of neat looking. But more often than not these big spectacles bomb or get trashed critically because there isn’t one ounce of honest character development or storytelling. This is where Thrones finds itself.

The showrunners want to finish this series. It has taken up nearly a decade of their creative lives and it has become the most popular show in the World. It is a success and it has an end point. They want to get to that end point now, an ending that I truly believe will be fascinating and rewarding for fans. So why are we in such a weird place where my excitement of seeing an ice dragon wears off after minutes and I immediately have to say to myself, “Man that episode was still really dumb.”?  We have spent 6 brilliantly plotted seasons with characters who have motivations we understand. Who have conflicts that have shaped them. Who have emotional and story payoffs that are almost always earned. In season 7 we have a rush to the spectacle with motivations that make no sense. We have Jon and 6 of the best characters heading North of the Wall to capture a wight to bring to Cersei? Cersei who has barely any army left and a fleet that 3 dragons could dispatch in an hour? They decide to go North and capture a dead creature in the hopes the most steadfast and ruthless character in the show will grant them a meeting, believe them, then join them in fighting an ice zombie army? Jon, Jorah, Dany, Varys, & Missendi ALL think that Tyrion’s plan to do this is a good one? THERE HAD TO BE A BETTER WAY TO GET TO AN ICE DRAGON. But it was a rush to the spectacle. Logic and previous characterization be damned.

Don’t get me wrong, I love the ice dragon. Love it. It had to happen. The plot mechanisms to get there were lazy. In a former life I watched about 5 seasons of the Vampire Diaries. It was an endlessly entertaining and stupid show where pretty people fought in ridiculous conflicts that would change in the same episode. You could have a villain introduced in minute one and by the end, after plot gymnastics they’d all get along during a montage set the The Fray’s latest single, as they worked together taking on the ‘bigger bad’ with their new powers. The motivations, development, and history was constantly changing so that we could rush to the spectacle. That is what is happening this season on Thrones. Its just happening on a much higher, better shot, and expertly acted level. The gymnastics of this season *just* so we could get an ice dragon were frustrating to say the least. I’m glad we are here but I don’t want to tell anyone how we got here because it is embarrassing.

I’m not here to bitch and moan about the travel. Nobody wants to watch characters on a boat for 5 episodes. I’m upset about the rushed plot contortion just so we can get to ‘The Loot Train’ scene and ice dragon reveal. What hurts the most is that there are some glimmers in this season that sing. Hot Pie’s conversaion with Ayra. The Stark girls’ reunion at Ned’s statue. Tormund and The Hound. Jon and Jorah discussing Lord Mormont. All of these moments are earned character moments that have been seasons in the making. I won’t even get started on Ayra and Sansa because I truly hope this is all a misdirect and they are playing Littlefinger and the viewer for some big reveal. If not? They have abandoned seasons worth of character development for The Real Housewives of Winterfell.

The plot gymnastics I complain about are just the shortcuts the show has taken. The Jaime in the river with armor. Gendry as a world class sprinter. Jorah being cured in 30 seconds. Etc. These are shortcuts that regular shows take all the time and we don’t bat an eye at. In fact, if Thrones was doing this type of plotting all along I wouldn’t say a word. It wasn’t though. It was above this. In earlier seasons Jaime would be dead or they would’ve captured him, brought him North to see a wight, then had him tell Cersei as the only person she trusts. These little shortcuts are just fraying the edges of the plot a bit and are really noticeable this season. The show is still world class entertainment but now, you can see a wart or two that would’ve previously been covered up.

HBO’s slogan is “Its not TV, Its HBO.” The shows on HBO usually operate at a level so vastly superior to typical TV shows that it makes their slogan perfect. For 6 seasons, Game of Thrones, in regards to storytelling and structure, was something that couldn’t be defined. It soared above the rest. it challenged us. It had the most morally ambiguous cast of characters ever assembled. It made the viewer understand and earn the payoff. It set a course only to abruptly deviate from it in a way that was shocking and felt real. For 6 seasons, Game of Thrones wasn’t TV, it was something else. Now in season 7 as they rush towards the end and what will no doubt be a spectacle, it feels like TV. 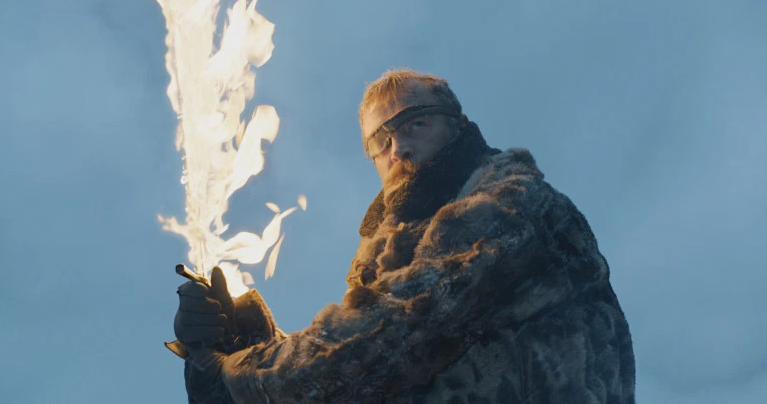 I want to call my shot in this article, meaning this what I predict. The show ends with Dany giving birth to twins. The names Ned & Lyanna sound good and they are each given a dragon egg found during the dragon glass mining on Dragonstone.