DISCLAIMER: I have not read any of the ‘Divergent‘ books, nor have I seen any of the previous movies in the ‘Divergent‘ series, although you could read our reviews HERE and HERE, but with me, you’ll have a fresh take on the series. So now that we’ve gotten that out of the way… let’s get to the point, which is that this movie was completely ridiculous. ‘Allegiant‘ is the third installment in this young adult series and only covers half of the third novel, so do not expect to get all your “allegiance” (yes, I went there) out with this one flick. So what can you expect? Boy, oh, Boy! You can expect heavy CGI, a pretty terrible script, about 25 minutes more ‘Allegiant‘ than necessary, unanswered questions, and some eye candy.

Let’s start with the good news: the eye candy. The two leads in this movie (I can’t call it a film) are played by Shailene Woodley (Tris) and Theo James (Four). No matter which sex you are attracted to, they are both easy on the eyes and thankfully present in the majority of the scenes. Had Theo James been iced early on I may not have endured the 121 minute run time. I can’t say that their acting was that thought provoking, but it did make me wonder what other movies I could see Theo James in (spoiler alert: almost nothing).

Now onto the bad news: almost everything else is disappointing. The first thing that threw me off was the cinematography. The shots range from very up close to these wide spanning shots that sometimes make things look out of focus. There is also quite a bit of CGI used to create the futuristic worlds both inside and beyond the wall, and with the sci-fi technology. In an industry where worlds are created like the ones in ‘Mad Max‘, where you are totally transported to another realm, it is a real let-down when a director relies so heavily on CGI. The post-apocalyptic Chicago just came across looking fake and thrown together instead of awe-inspired. The script, while written for the tween audience, was generally predictable and in some instances laughable. I actually scoffed when one actor said, “our plasma bubbles will protect you from the toxicity,” and then they all were encased in CGI bubbles and floated into the sky.

The run time was a bit too long; I almost dozed off at one point where the plot seemed to be dragging on. Most importantly though, if you can get over all of the above, the movie still leaves you with many unanswered questions. The person I saw it with may have summed it up best, saying “if you can accept that this movie is completely illogical, then you should be fine.” I suppose I was looking for logical answers to my questions, which was absurd considering the underlying plot line. 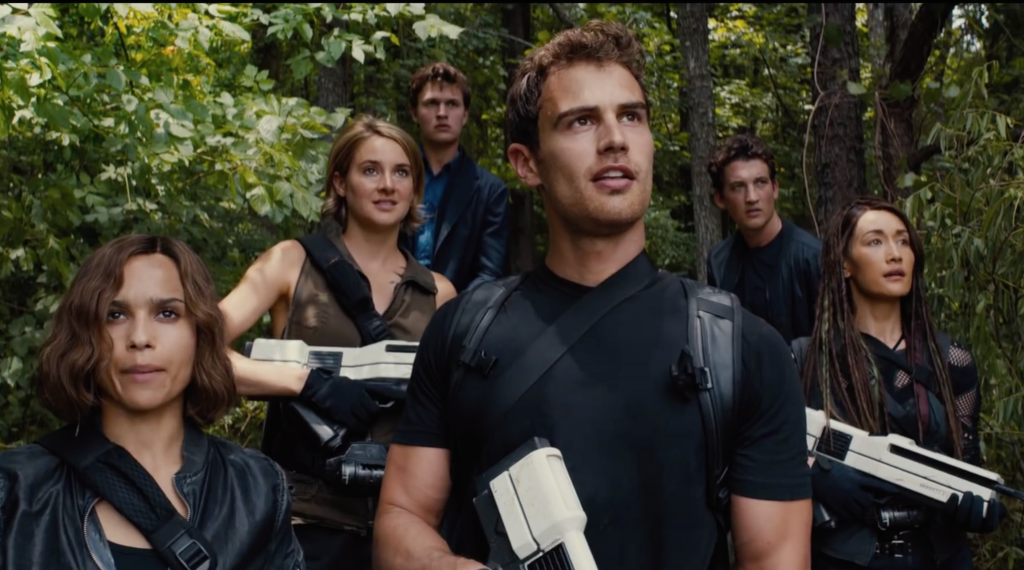 Overall though, it’s mildly entertaining and if it came on TV or I was desperate on Netflix, I may watch ‘Allegiant‘. Otherwise, you shouldn’t pay to see this movie… that is unless you are a hardcore ‘Divergent‘ fan or you need a Theo James fix.  If you are looking for a poor man’s ‘Hunger Games‘, this is your flick.

If you’re a major fan of the series or a tween, ‘Allegiant‘ receives 3 out of 5 Stars. For everyone else, if you’re curious enough…