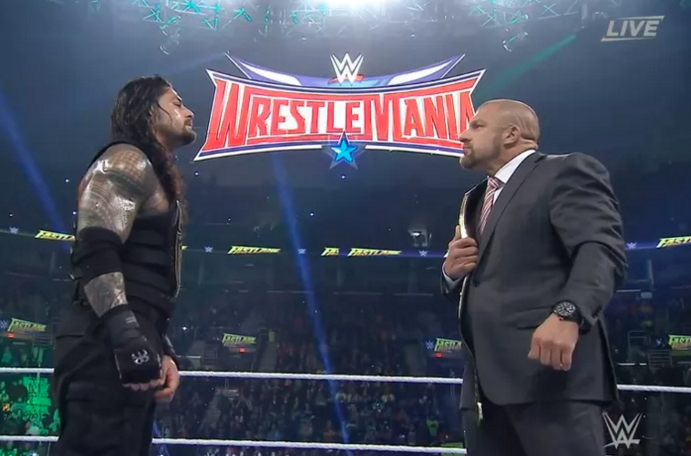 As a whole term paper you’d turn in to your professor as the final minute strikes down, this PPV called ‘Fastlane’ would have received a failing grade in big red ink. That’s not to say that there were some impressive moments. There were for sure some great spots by a few people, but as a whole, the PPV and booking seemed rushed, lazy, and incoherent on a major level. This is unfortunate, because this is the PPV that basically will determine what happens at Wrestlemania 32 – the biggest WWE event of the year. You can also add that this is the first time a Wrestlemania will be in Dallas to the biggest crowd the WWE has ever seen, with it topping more than 100,000 fans. After last night, ‘Fastlane‘ has done nothing to secure a hyped or fun Wrestlemania 32 for Dallas and the WWE Universe. In fact, I’d go as far to say that the Vince McMahon has lowered expectations by a considerable amount. 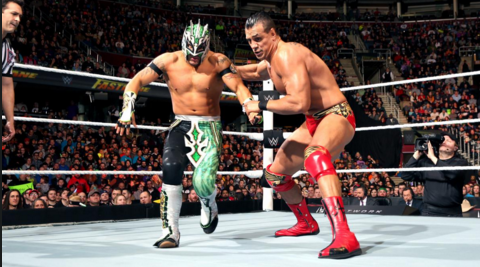 Why did ‘Fastlane‘ fail though? Well there are several mind-numbing reasons, but let’s start out with the good first. The pre-show match was between Alberto Del Rio and Kalisto, which should have been booked in the middle of the PPV and not before the PPV actually started. Both wrestlers told a great in-ring story and sold every major spot. It was action packed, fast-paced, and a lot of fun to watch. Del Rio did a great job doing his heel schtick and Kalisto always won over the crowd, proving that he is an amazing solo superstar. The finisher was an anti-climactic roll-over, but it worked. 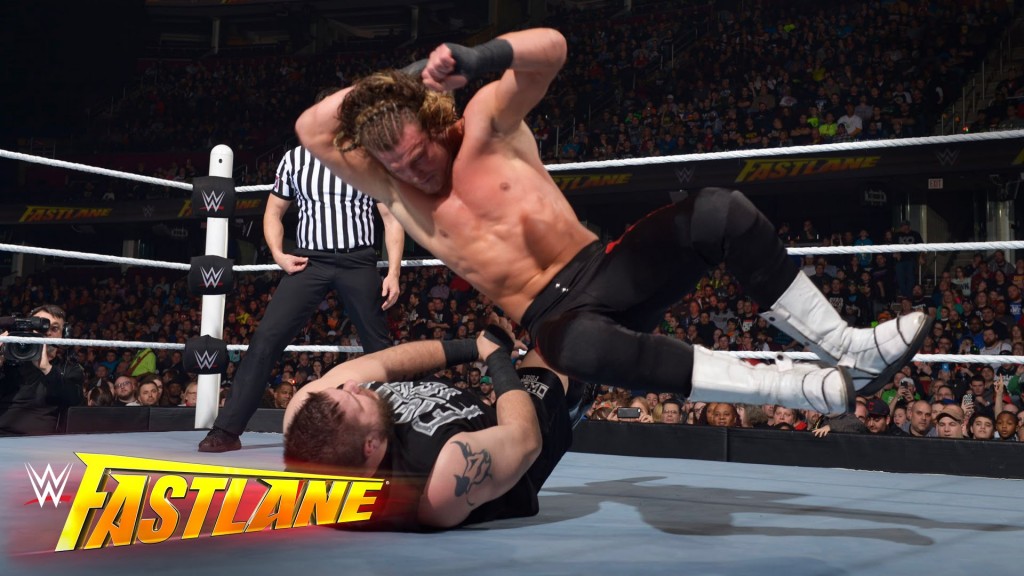 Then there was Kevin Owens vs. Dolph Ziggler. Now, I love Ziggler. He’s a fun guy, excellent wrestler, and highly entertaining to watch. The problem with him is that he’s peaked as a wrestler. There’s really nowhere for him to go unless he went full on heel with The Authority or he became a silly gimmick like Gold Dust. That’s just the way it is, so there was no chance in hell that he was winning the IC title from Kevin Owens, which he didn’t. That being said, Ziggler put on one hell of a match with Owens, probably his best in years and did right by selling every move and taking the fall, only to prove that Owens is one of the best wrestlers out there today. I hope they don’t continue this feud into Wrestlemania, because what’s the point. 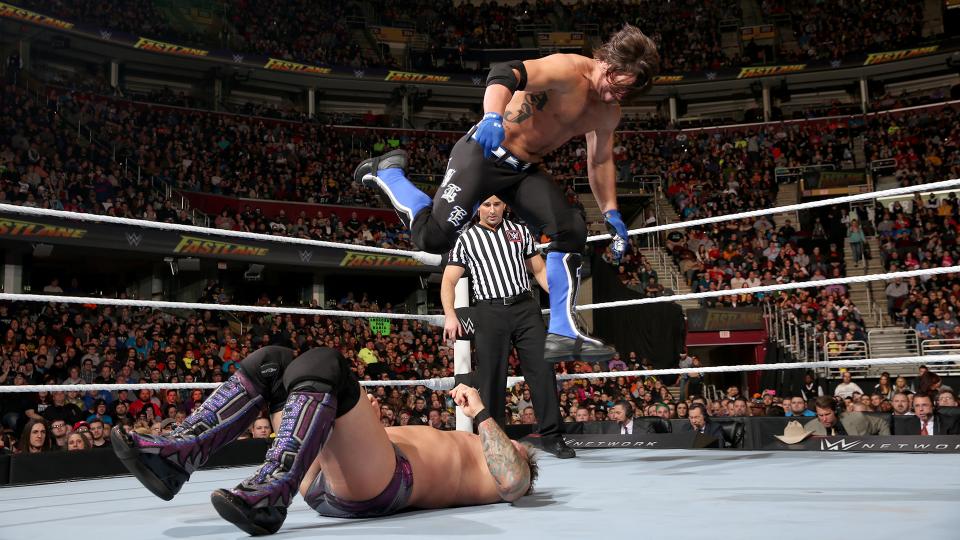 Then there was the AJ Styles vs. Chris Jericho match, which had the newcomer to WWE, AJ Styles battle for the third time Chris Jericho. Everyone, including the Boomstick staff thought Jericho was going to turn full on heel here, but that didn’t happen. Instead, at the end of the match with Styles winning, Jericho shook his hand. There is nothing worse here than a good guy Chris Jericho. He’s born to be bad and mess with people, not shake their hands and pat them on the back. The match itself was stellar and there was never a dull moment. The WWE let AJ Styles do what AJ Styles does and Jericho went along with it every step of the way. I only wish Jericho turned full heel and not the good guy he never seems to be. 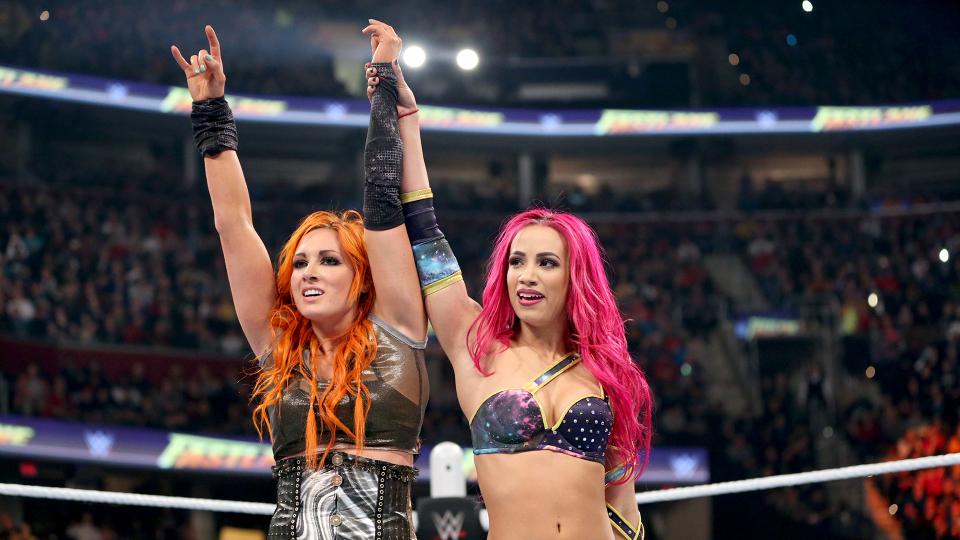 In a good move on WWE’s part, the PPV actually started with a women’s match with Sasha Banks and Becky Lynch defeating Naomi and Tamina. It was a great match to start out the PPV, and might be the first time a women’s match ever opened an event like this. Sasha is one of the best wrestlers in the WWE right now, man or woman, and her and Becky brought the goods. It’s just a shame that Tamina and Naomi don’t have the storyline or mic skills down yet. 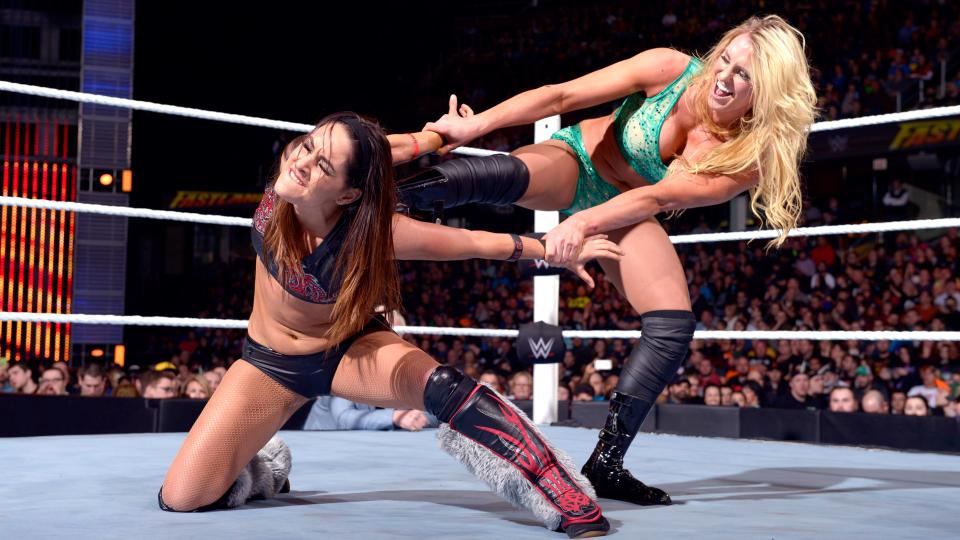 The Divas Title match between Brie Bella and Charlotte Flair was a lot of fun, as Brie executed her husband’s moves quite a bit to an enthusiastic crowd by chanting Yes, wearing the goat boots, and delivering a ton of powerful kicks in the style of Daniel Bryan. But of course, WWE has plans for Charlotte and she made Brie submit. This was probably one of Brie’s best matches in the WWE, but I expect Charlotte to lose the title at Wrestlemania and not here. 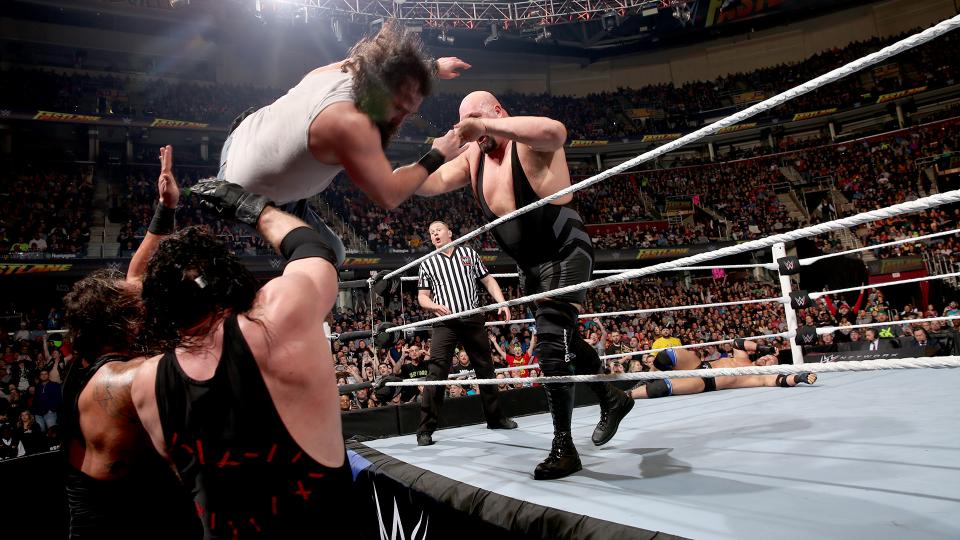 One of the more annoying matches was with the Wyatt family. Vince and the creative team have created a monster with these four guys who may never get out of their current horrible storyline. Their storyline only consists of them sneaking into a finished or ongoing match, and destroying the talent that is in the ring. Beards and masks don’t win matches though, or at least real matches, as it’s been proven time and time again. This time, Ryback, Big Show (who is now a face and happy go lucky), and your friendly neighborhood Demon Kane battle the Wyatts with Bray sitting ringside. With Ryback, Big Show, and Kane not having any real storyline to stick with, it was clear the the Wyatts would show off their powers and destroy them easily. Everyone was shocked when once again at a PPV, the Wyatts lost. It makes no sense and the Wyatts lose all credibility until they sneak attack someone else. This match also made no sense, because it doesn’t further any kind of story for Ryback, Kane, or Big Show, unless they will become a Tag Team. It won’t happen. 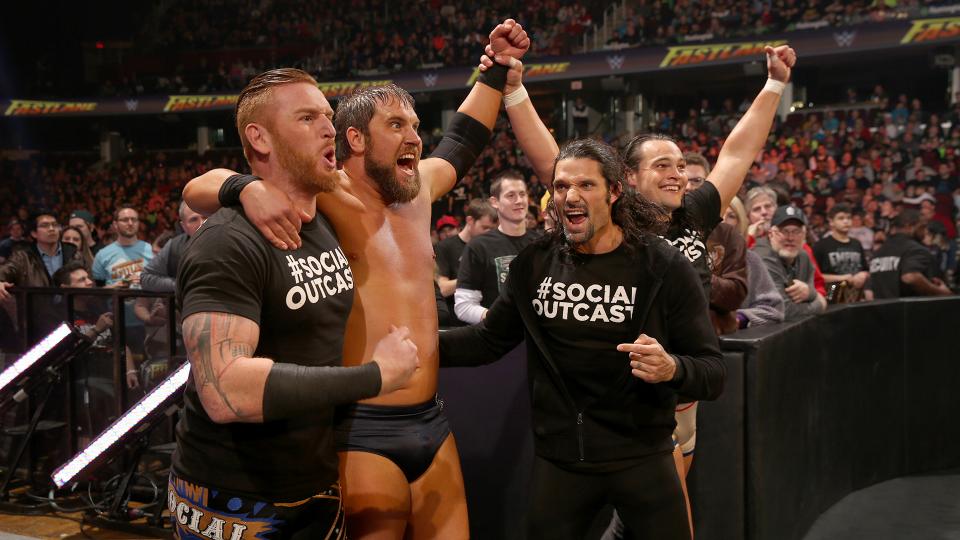 The main event was supposed to happen, but I guess Roman Reigns, Dean Ambrose, and Brock Lesnar weren’t ready yet, and a rushed and lazy match happened between Curtis Axel and R-Truth. The match lasted under three minutes and had no point to it. It was like watching a Saturday Main Event tv spot or the long and dragged out third hour of Raw with a time filler short match. Come on, guys – this a PPV. A PPV right before Wrestlemania. We don’t need these matches here. 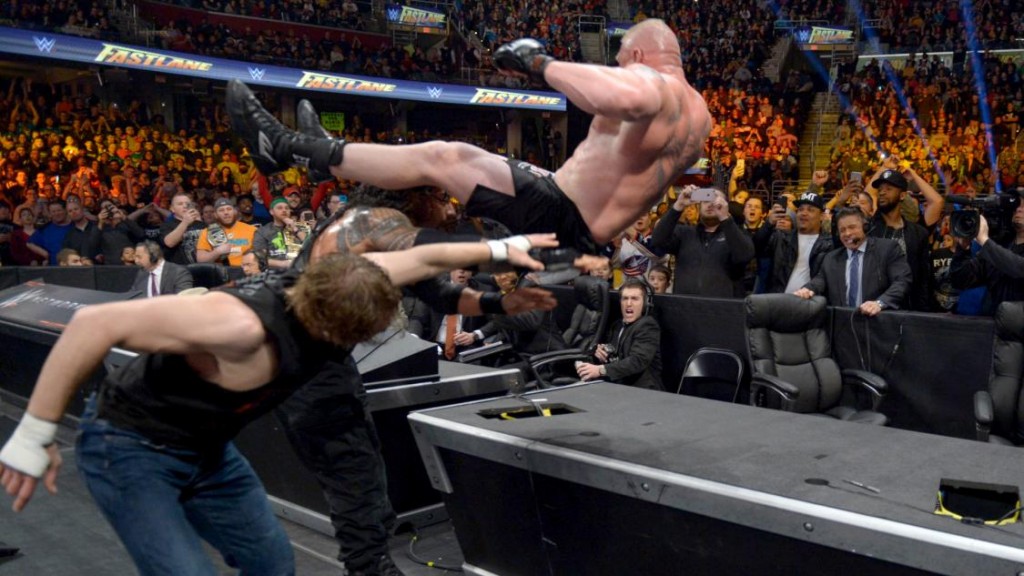 Then onto the main even we were where Dean Ambrose, Brock Lesnar, and Roman Reigns fought in a triple threat match to see who faces the big bad Authority member Triple H for the Championship belt. Here is where ‘Fastlane‘ dropped down to a major failing grade. For some reason, Vince McMahon and the creative team want Roman Reigns to be the face of the company. That’s all fine and dandy, but you need someone with charisma, wit, and solid wrestling spots. Reigns has none of these, at least for the time being, or at least that we’ve seen. Reigns is still sporting his former Tag Team gear, theme song, and entrance. He needs to distance himself from this Tag Team. Yes, I know The Shield was one of the best tag teams ever and they will forever live on, but it’s like ‘Breaking Bad‘. It’s over, now move on. Add to that, Reigns is a monotone unfunny nightmare on the mic with zero wit or charm. It’s like he’s reading off a cue card at any given moment. Also, his finishing moves are a punch and running into someone. It’s not exactly the five star frog splash or the pedigree. 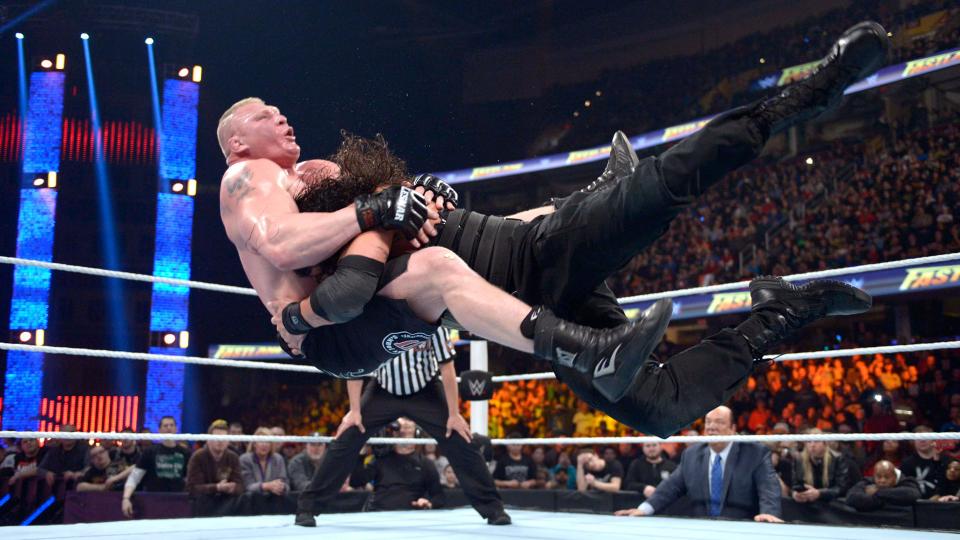 Yes, Reigns is tough, but he does nothing on the mic or in the ring to warrant a main-eventer status. He’s mid-card at best right now, but Vince thinks he needs to be John Cena version 2.0 for the little kids, and this (I feel so bad for Reigns) has made the audience largely turn on him. He is met with sneers and boos more than cheers and praise. This is not because the WWE universe dislikes him as a person or wrestler, but how Vince and the creative team have booked him over the past year. Reigns as of right now is not ready for it, until he changes his persona and becomes one in his own, and not sticking with his Shield schtick. After all that being said, Brock Lesnar should have won the match if this were real, but Ambrose and Reigns took the opportunity and made Lesnar the priority for most of the match. Yes, this meant the two teaming up to put Lesnar through two announcer tables so that the two former Tag Team brothers could battle it out. 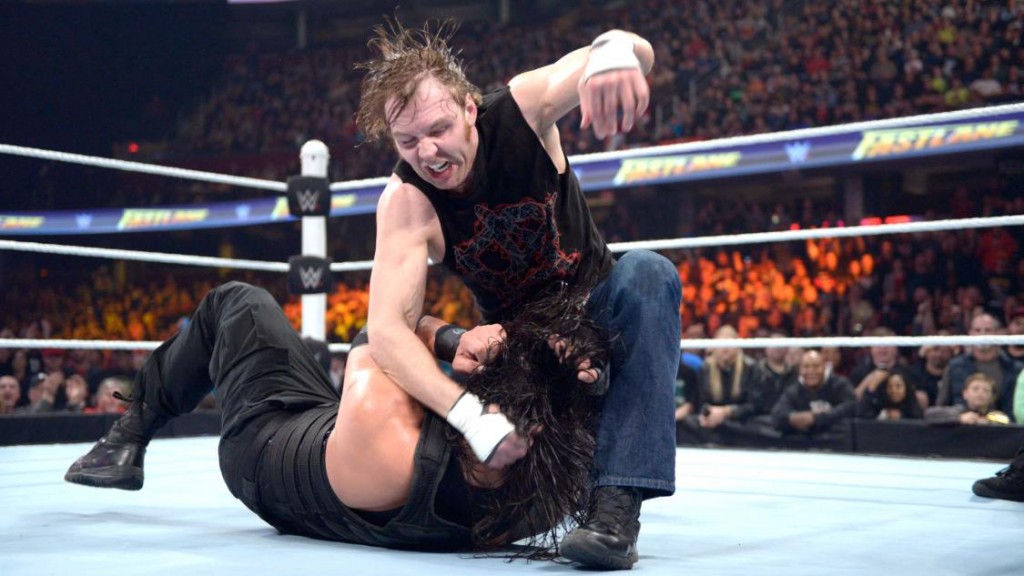 Dean Ambrose was the MVP here and should have won the match. The entire audience is behind him in a big way and Reigns should have turned into a bad guy and aligned himself with Triple H and the Authority. It would have been what’s best for business. To have the Roman Empire reign down with an iron fist on Ambrose and whoever else stepped in their way. That didn’t happen, and instead Triple H came out, where everyone cheered for him and booed Reigns. Vince and the creative team were hoping for the complete opposite response. Now at Wrestlemania 32, we will have an uninteresting and boring main event with an old Triple H and old and busted Roman Reigns persona without the help of Brock Lesnar or The Rock in the main event. Wrestlemania 32 is not looking good at the moment. 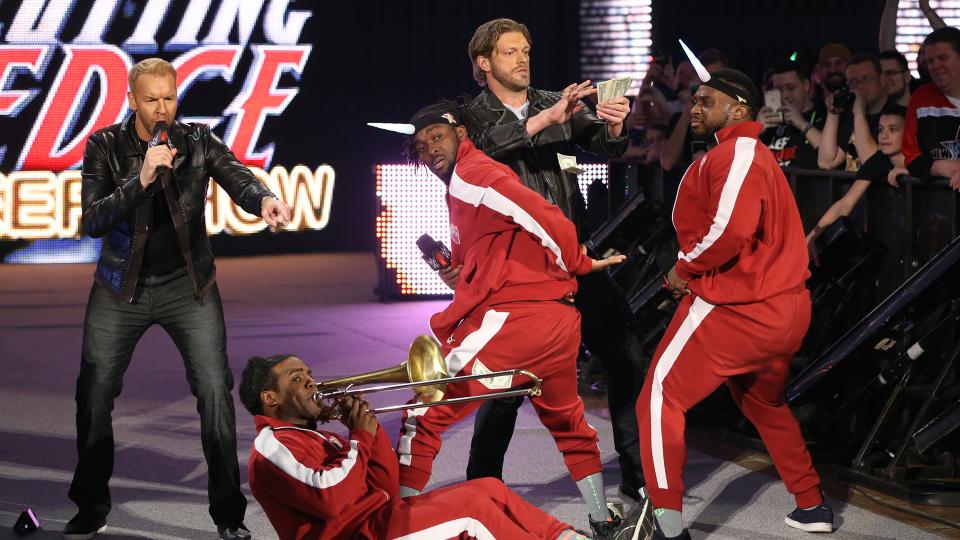 On top of all this, Vince decided to do a live 15 minute promo in the ring for Edge and Christian’s new original show on the WWE network. It failed, miserably. The New Day came out and did their thing, which was AMAZING as always, but Edge and Christian have definitely lost their skills. It was embarrassing to watch and full of garbage. Things didn’t get any better when the League of Nations came out either, and everything sizzled out in a matter of seconds, leaving us to question this entire PPV.