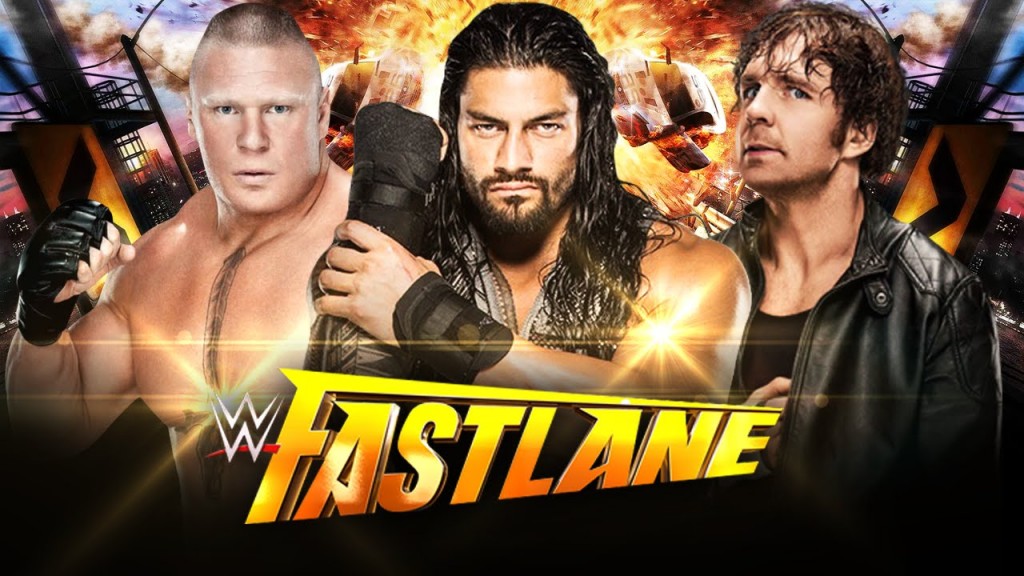 Good day, wrestleheads! We are in the throes of Wrestlemania Season and the final “Special Event” stop on this runaway train is Sunday in the form of WWE’s new annual pay per view, Fastlane. We’re gonna run down (get it? run? because fast) the card and see how everything adds up. This PPV is going to get most if not all of the pieces in place for “The Biggest Wrestlemania Ever” in Dallas, TX on April 1st. Let’s get straight to the biscuits.

PRE-SHOW MATCH: 2 out of 3 Falls Match for the US Title. Kalisto (c) vs. Alberto Del Rio. 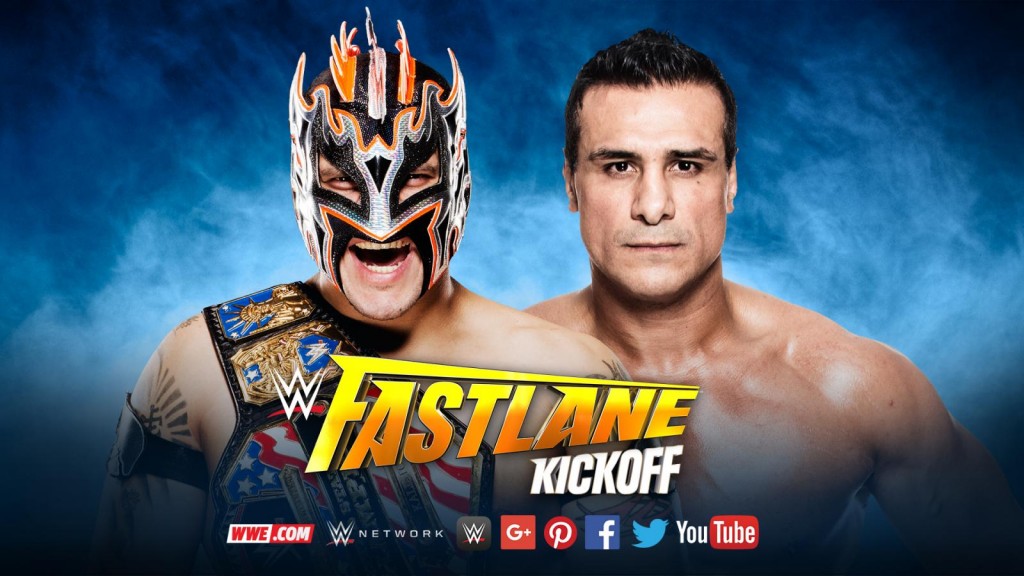 2 out of 3 things: 1.) Why is this match on the preshow? 2.) Why is this a match? The third thing: Kalisto is great and this feud and win/loss/win/loss book isn’t helping anyone look like they should be champion of turdsville.

Kalisto was the surprise breakout star of late 2015 – he had the OMG Moment of the Year in his ladder match at TLC and once Sin Cara got himself hurt (again. no, again.) he was given a chance to really shine as a singles star. He was thrown into a feud with Alberto Del Rio, an A+ performer who has been on A+utopilot since his return last year. Their match at the Rumble was good but unmemorable and despite the NXT-approved 2-of-3 stipulation applied, it’s hard to care about this match since they’ve been trading wins and therefore title reigns since December. So, remember how I was confused about this being on the preshow? Nevermind, I answered my own question.

Kalisto needs to hold on to the belt here and get thrown into a BIG TIME match at Mania (Word on the street is that Rey Mysterio ain’t too happy with AAA at the moment…) to keep his fire alive. Kalisto should win 2-0 in a sweep against Del Rio to get him in his rear view and move on to bigger and better things.

They’ll trade pins again until Kalisto sneaks one away from Del Rio with a rollup and this feud will continue until 2017 because there are no other Mexican wrestlers on the roster.

BIG SHOW/RYBACK/KANE vs. THE WYATT FAMILY 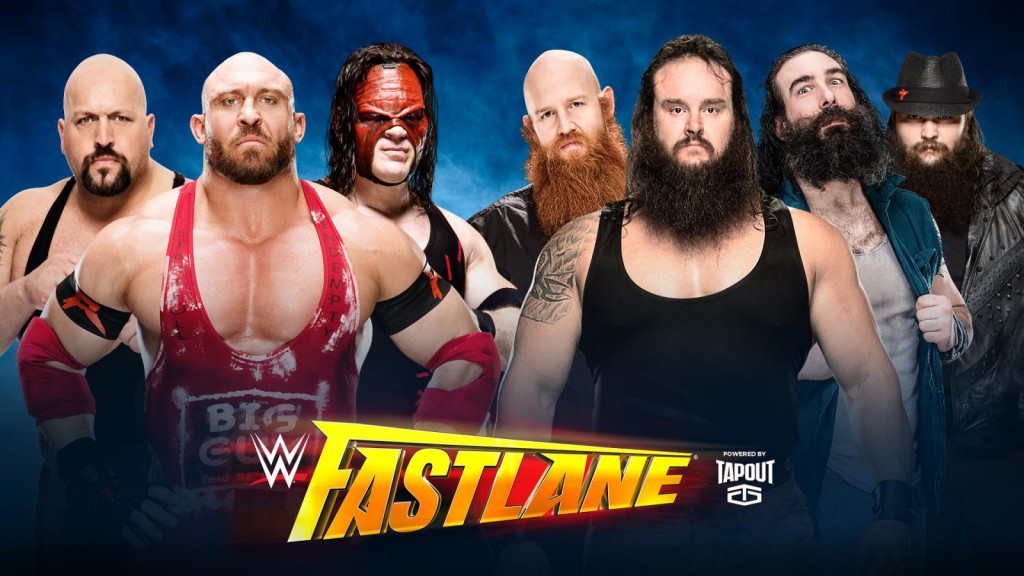 THIS is the match that should be on the pre-show. I’m not even going to waste my calories typing about it. It means nothing. It signifies nothing.

The Wyatts should Boss everyone in the ring and pin all three of these dorks in less than three minutes.

SASHA and BECKY vs NAOMI and TAMINA 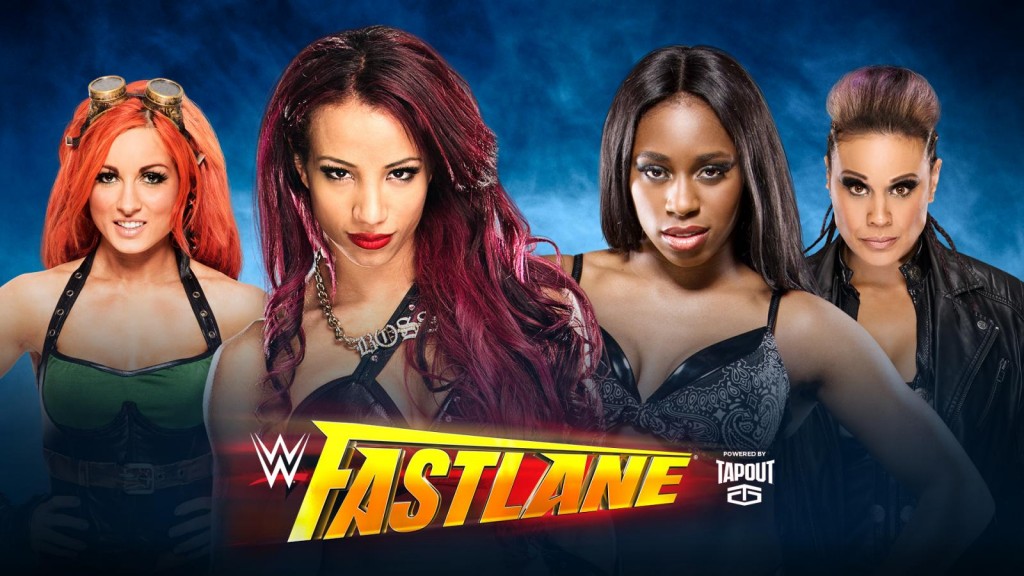 Poor Becky. She had a fire feud with Charlotte for the last two months and then BOSS QUEEN SASHA showed up and made her insignificant. She’s teaming with the girl that straight up kicked her out of the ring (and out of the title hunt) at the Royal Rumble and acting like she’s her best friend. Becky Lynch is Sting. The most trusting dum dum who ever lived. I hope Becky faces Sting at Wrestlemania and end up tapping out simultaneously to their own submissions. Back to the point: BOSS QUEEN SASHA is the best thing about wrestling full stop and assuming that the Divas’ (ugh) Title Match ends correctly – more on that later – she’s going to set Dallas ablaze on April 3. 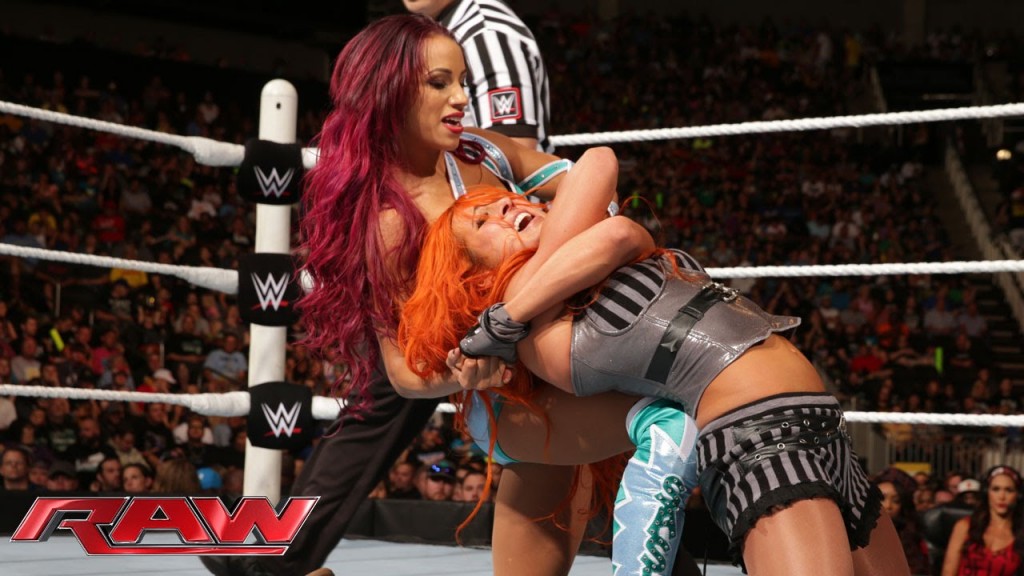 There’s an interesting struggle in this match, with every other diva not named BOSS QUEEN SASHA grasping for relevancy. Becky needs to look good so she’s not forgotten and Tamina and Naomi need to prove that they haven’t already been forgotten. This is shaping up to secretly be one of the best matches on the card because you’ve got a lot of women thirsty to be taken seriously and THE BEST WRESTLER IN THE ENTIRE WORLD. 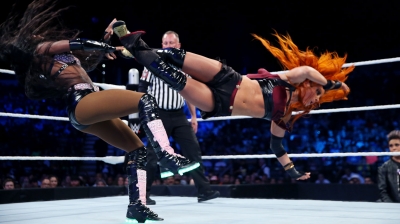 Sasha Taps Naomi and Becky confronts her after the match for stealing the victory from her due to a blind tag. Underdog Becky vs. GLORY GLORY HALLELUJAH SASHA vs Full Flair Charlotte at Mania for the title has all the makings of a HUGE match but Becky needs to keep her edges rough in order to look like a serious contender.

Sasha and Becky still win but probably start feuding with each other until they see a common enemy in Charlotte. 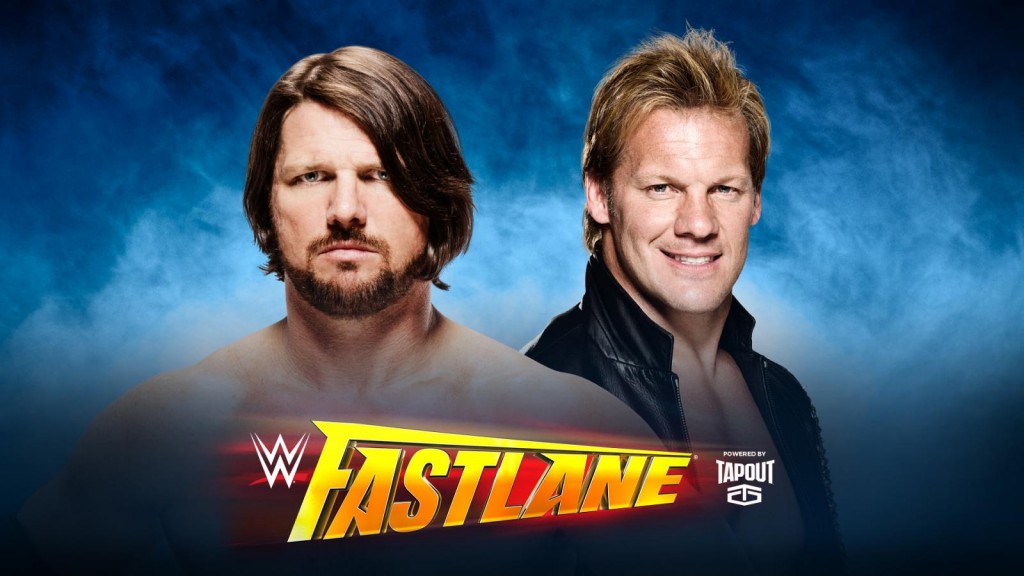 The rubber match in their best of three series happens on Sunday and we should all be excited for it. AJ is such a new and endless pool of wrestling wonders that we haven’t even begun to see all that he is capable of in WWE. Chris Jericho has been using this feud to go from World’s Worst Babyface to World’s Greatest Heel and i think we see that transformation completed on Sunday. AJ’s going over, maybe even with the Styles Clash, and wrestling fans are going to have another great match to salivate over as we all fantasy book AJ’s Wrestlemania opponent (It’s Kevin Owens). 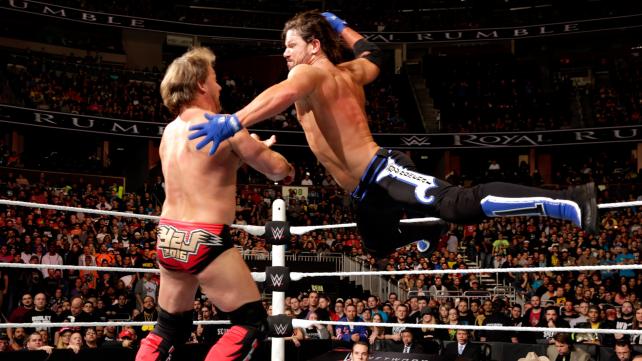 AJ Beats Jericho clean and Jericho snaps and completes his dark side turn.

BRIE BELLA vs CHARLOTTE (c)  for the DIVAS’ TITLE 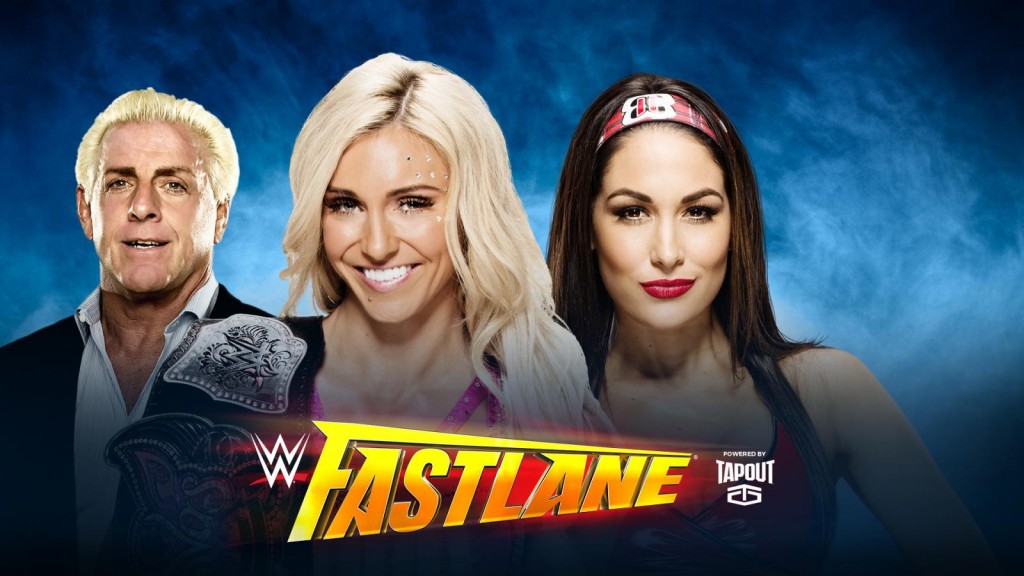 Daniel Bryan is fresh on everyone’s mind and his wife is going to be the feel good babyface of the night. She’s up against a super powered heel goddess in Charlotte, though, and that’s where the drama’s really gonna get ramped up. Brie’s gotten much better at wrestling over the years but still can’t hang with the ladies of NXT. I don’t see the title changing hands here, no matter how “feel good” the story is. Charlotte, like Jericho, is embracing the dark side week by week and she’s going to overpower and crush Brie. 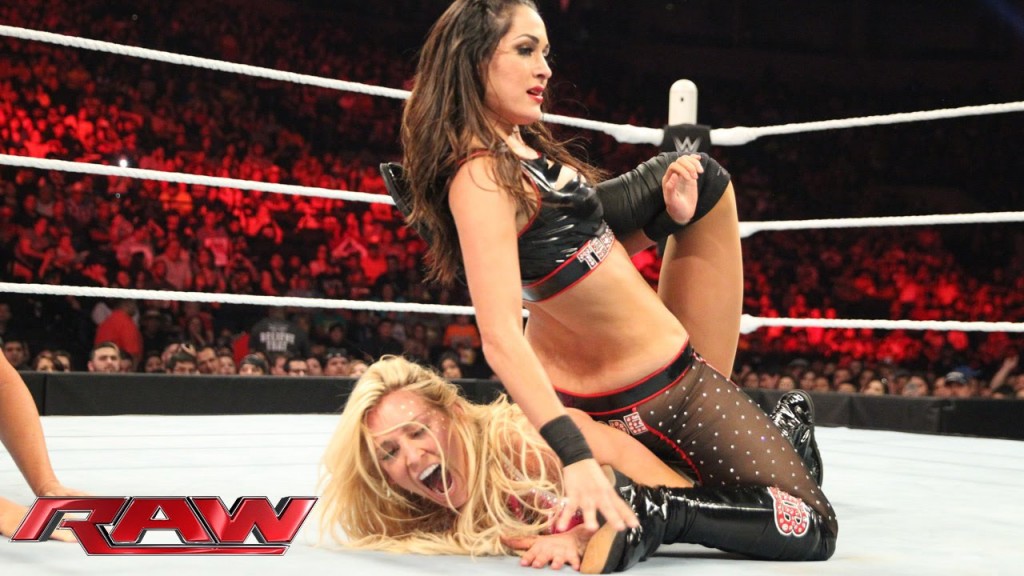 Brie puts up a strong fight and kicks out of a lot of devastating moves but is ultimately and violently put down by a pissed off and vengeful Charlotte.

I don’t know. I can see the title changing hands just as a way to “honor” D-Bry but in wrestling, you always go out on your back. With the rumors flying about Brie’s imminent departure to be a mom with Bryan, I see her final (?) match being a hard fought loss to a superior opponent. Gotta keep Charlotte looking unbeatable for that Wrestlemania payoff with Sasha, right?

DOLPH ZIGGLER vs KEVIN OWENS (c)  for the INTERCONTINENTAL CHAMPIONSHIP 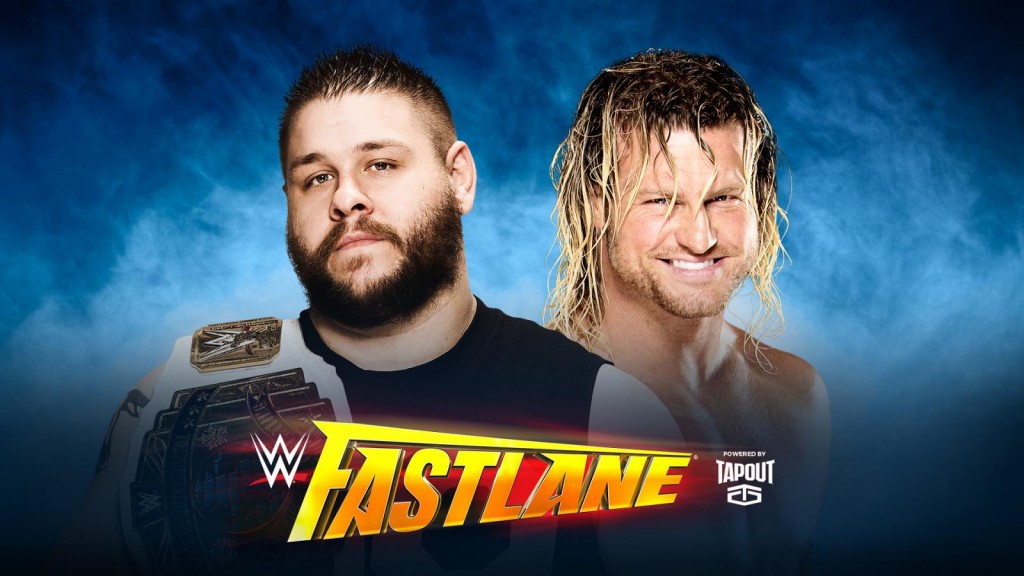 WWE really ruined my fantasy book for Wrestlemania with this last minute title change on Monday. It’s okay though, I’ve rebooked it to my liking. In a move no one really saw coming, Dean Ambrose lost the IC belt to Kevin Owens (who pinned Tyler Breeze, RIP Tyler Breeze on the main roster) on Monday. Typically, dropping a midcard belt is the gateway to winning the big gold but more on that in a second…

KO has been an outstanding IC champion and I’m glad he has to belt to bully Ziggler some more. It’s nice that the Zig/KO series of matches that were seemingly for nothing over the last few weeks seem to MEAN something now. One more match, with the gold on the line. Ziggler, unfortunately, has topped out in WWE and KO is about to begin his rocket-ship to the top of the card so… 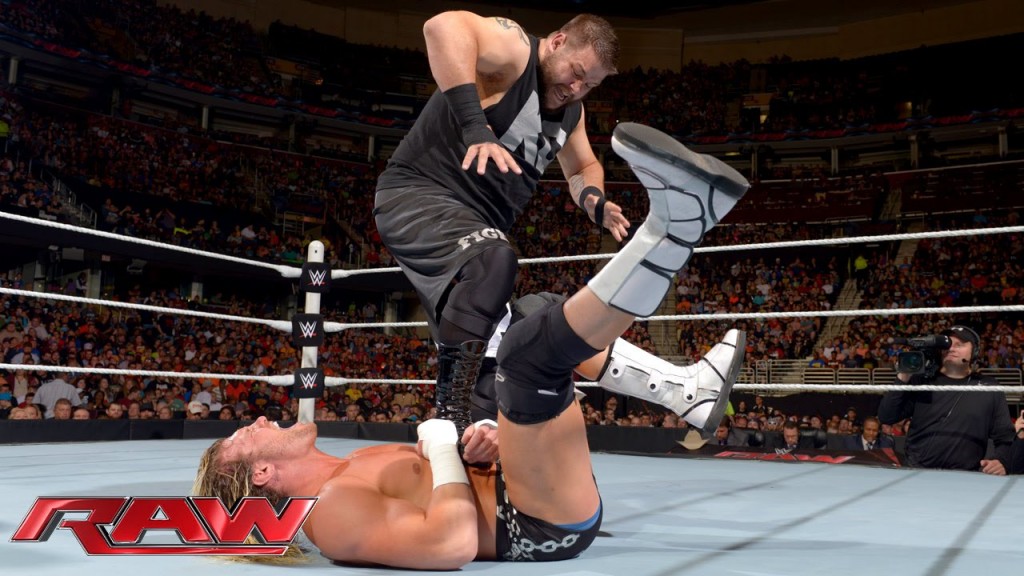 KO pins Ziggler after another great match and starts looking for someone else to pick on. Hey, that AJ kid is sorta small…

The belt stays on KO but a dirty finish means we see this match a few more times before we move on to the next feud for both of these guys. 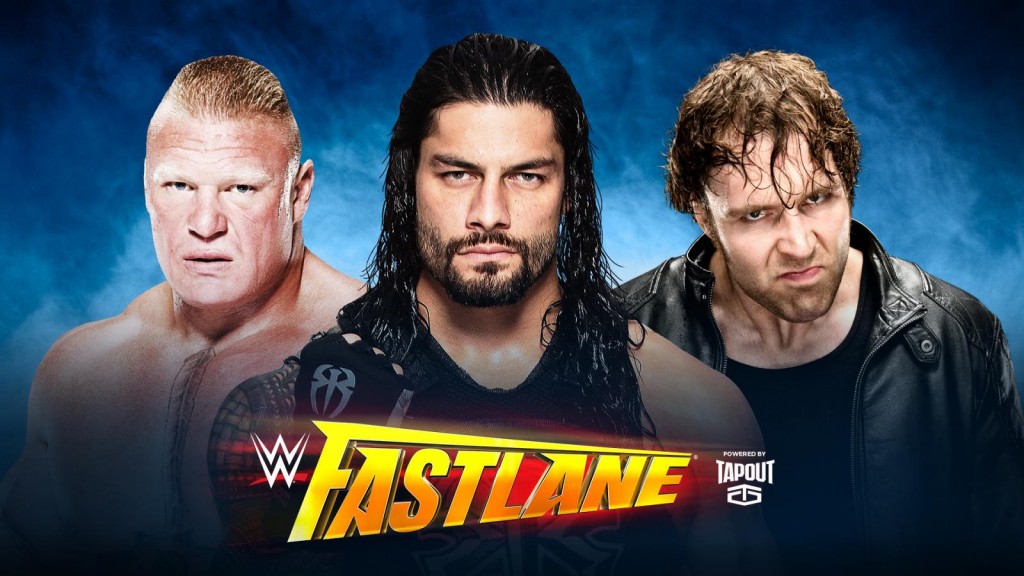 A Triple Threat for Triple H, huh? Dig it. I am absolutely loving the story behind this match so far. Ever since the Rumble was ALL ABOUT ROMAN REIGNS, I really thought this match was a foregone conclusion – #ROMANWINSLOL – but they’ve done this really interesting thing since the Rumble ended: Dean Ambrose has been the focal point for a solid month. he’s bossed Roman around, he’s called out Brock Lesnar, he’s opened RAW multiple times… It’s like the halo has shifted from Roman to Dean ever since The Rumble and I AM OKAY WITH THIS. It’s been an interesting week of TV with Dean trying to hit his finisher on Roman several times, just to say that NOW IS MY TIME, BROTHER, DEAL WITH IT and it’s a good story.

I think Dean dropping the IC belt could be a red herring but this match, for me, still has a lot of unpredictability with it. Brock being in this match not only distracts from the first ever Roman vs. Dean match where they’re not 100% best friends going in and that’s a good thing. Lots of people are gonna get dumped on their heads and this main event has a legit chance of overshadowing the excellent Daniel Bryan vs. Roman Reigns match that toplined last year. I’ve got a lot going on in my head so here we go: 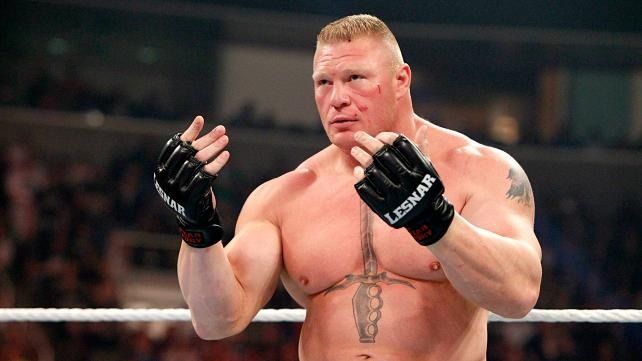 Dean Ambrose takes the surprise win once Brock is taken out by the Wyatt Family and we have an out-of-nowhere Wrestlemania main event that won’t get booed out of the building. Dean has been insanely over with the fans these last three months and even though WWE took away the idea of HHH forcing Dean to defend the IC belt right before facing him at Mania, this opens up a whole new door of good shit. Roman Reigns, believing that Dean took advantage of him, turns on him in a big way and HHH uses Roman as his muscle for the next five weeks to make Dean’s life a living hell.

Seeing his opportunity to face a beaten down opponent at Mania, HHH books Roman vs. Dean directly before the main event and promises Roman that if he destroys Dean Ambrose, he’ll award him the belt at the end of Wrestlemania and usher in The Roman Empire with the full backing of The Authority. Heel King Roman can then run roughshod over the depleted roster as their lord and king until SummerSlam when a white knight named Rollins comes home to see his realm in ruins and an unleashed dragon in the hands of the King HHH.

See y’all on Sunday. This is gonna be a good one.