The year 2015 marks the 24th ‘James Bond‘ film in the 007 franchise. It also marks the most expensive Bond film to date, which is also in the top two most expensive films ever made with a budget of over $300 million. Even in addition to that, this new 007 movie, titled ‘Spectre‘ is the longest running Bond film with a runtime of 148 minutes. With the billion dollar success and critical acclaim from ‘Skyfall‘ a couple of years ago, the studio and its executives thought it would be a good idea to go bigger and “better” on everything. That’s not always a good thing, as is the case with ‘Spectre‘, which is bloated and disappointing.

It’s known that Daniel Craig has signed on for a total of five ‘Bond’ films, but has let everyone know recently that he’d rather do anything than another 007 movie, and after watching this mess of a movie, I can see why. Back with Craig’s first appearance of Bond in ‘Casino Royale‘, the filmmakers had a great idea on their hands with a fantastic reboot that made this iconic character more relatable. Bond was dark, brooding, rough, and fun. He was anything but the smarmy womanizer with one-liners that we saw in many of the previous movies, which got new and old Bond fans back in the theaters. 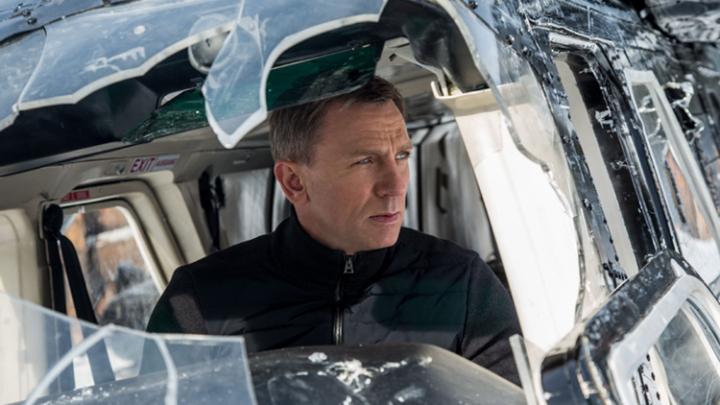 There was a some great character development with Bond as well, specifically with ‘Skyfall‘, which put Bond on his home turf in a good old fashioned fist and gun fight. It was a back to roots sort of film with a dynamic villain, excellent action sequences, and wonderful character. Needless to say, it succeeded both critically and financially. I really wish I could say the same thing for ‘Spectre‘, which actually starts off very well, but quickly shows what kind of movie it actually wants to be, which is more slapstick and cartoony than a Bond film that fizzles with each action scene and character. Even Bond himself looks bored.

Sam Mendes is back in the director’s chair again as the first shot of the film is something straight out of ‘Gravity‘, which is a multi-minute one-take tracking shot as Bond wonders around a crowded Mexico City during the big parade of the Day of the Dead, through a hotel, up to a roof where he plans to kill some bad guys in typical big Bond fashion. After this camerawork, things go downhill fairly fast. Each action sequence never has an ounce of real suspense, but feels like we’re watching a PG movie. Each car chase never has any momentum, but instead tries to put the focus on silly comedy quips, such as when Bond is pushing buttons on his car to only blare the radio loudly instead of firing guns. It’s this kind of writing that plagues this movie.

After the incident in Mexico City, Bond is grounded by M (Ralph Fiennes), due to a new guy in town named Max Denbigh (Andrew Scott) who has a new security system he wants to implement around the world that would put the business of Bond out of business in so many words. It’s basically the same plot line as ‘Mission Impossible 5‘ and ‘Furious 7‘, only ‘Spectre‘ doesn’t execute as well as those others. Meanwhile, throughout the past three films, Bond has been on the scent of a secret society called Spectre, which is led by a guy named Franz Oberhauser (Christoph Waltz), who is the main villain this time around, but you wouldn’t really know it, because, he’s barely in the film, which is the case with most of the other characters, including Mr. Hinx (Dave Bautista) and Lucia Sciarra (Monica Bellucci) who only have a few minutes or less of screen time in this 148 minute film.

Sure, Mr. Hinx has a decent action sequence inside a moving train, but is ended quickly with a slapstick goofy anticlimax that resembles a ‘Tom & Jerry‘ cartoon. It’s very unfortunate, because somewhere in ‘Spectre‘ is a good story and movie, but that’s not what we’ve received. If the filmmakers wanted to add the slapstick-goofball elements to this Bond, they should’ve started with ‘Casino Royale‘, instead of surprising us with this different tone, which more or less isn’t welcome. There are a few good moments of ‘Spectre‘, but they are widely spaced out to make this a memorable ‘007‘ movie. I know it’s James Bond and you’ll want to see it regardless, but be warned before you see it, that it in no way lives up to the previous three films.

WORTH A LOOK BECAUSE IT’S JAMES BOND ONLY!