Prepare Yourselves For The ‘Victor Frankenstein’ Trailer, It’s a Chiller!!! 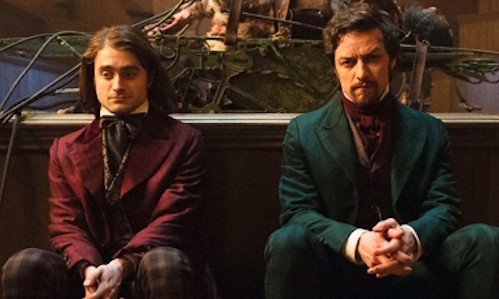 James McAvoy and Daniel Radcliffe star in the highly anticipated reimagination of one of the most classic stories pen ever put on paper, ‘Victor Frankenstein‘. In this re-telling, McAvoy stars as the legendary and radical scientist Victor Frankenstein while his equally brilliant protégé Igor Strausman (Radcliffe) shares in the good scientist’s noble vision of aiding humanity through their groundbreaking research into immortality.

Victor pushes the experiments too far for Igor, Frankenstein’s obsession leads to naturally horrifying consequences. Only Igor can bring his friend and mentor back from the brink of madness and saves him from his monstrous creation. If you’re a fan of BBC’s ‘Sherlock‘, you’ll see some familiar faces, no, Cumberbatch doesn’t make an appearance in the film, but Andrew Scott (Moriarty), Mark Gatiss (Mycroft Holmes), and Louise Brealey (Molly Hooper) co-star, it makes sense when you think about the fact that director Paul McGuigan directed 4 episodes of the hyped series. Check out the trailer to this gothic horror set to debut November 25, 2015.