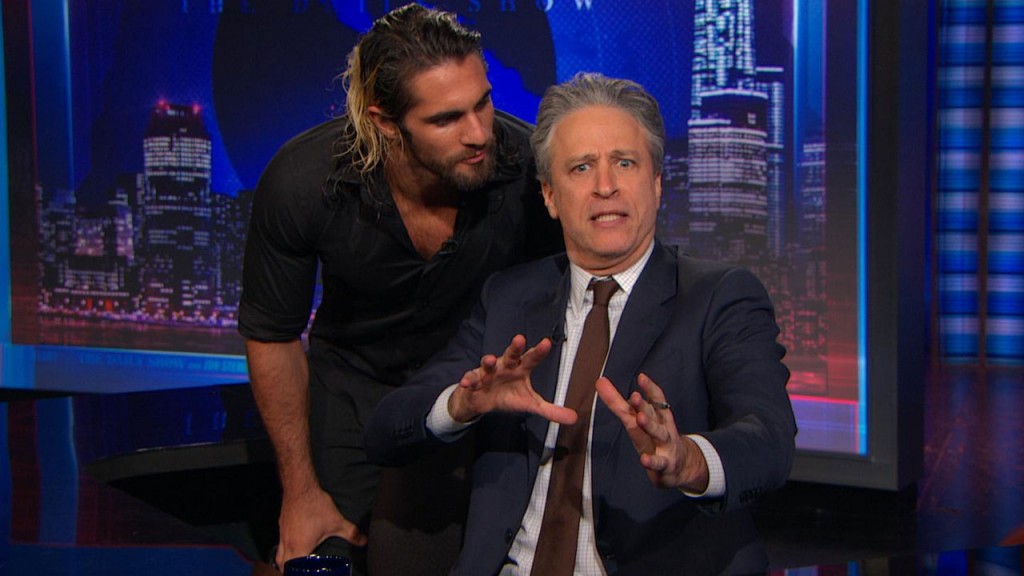 Jon Stewart isn’t a man to shrink away from a challenge of any kind and he’s dipped his toe in the waters of the squared circle, so the announcement that the former ‘Daily Show‘ anchor has been named as the host of WWE’s upcoming SummerSlam pay per view coming this weekend, August 23!

The former host has been a longtime WWE fan and even appeared in one of the storylines where he had a feud with World Heavyweight Champion Seth Rollins. It played out as you’d expect, Stewart sends Rollins an online video talking plenty of smack towards the skunk-haired pain in the ass, Rollins appeared on ‘The Daily Show‘ where he challenged Stewart to settle the score in the ring on ‘Monday Night Raw‘ to settle the rising tension. Stewart accepted the challenge and delivered one hell of a low-blow to not only Rollins‘ boys, but his ego.

Since then, Stewart has left ‘The Daily Show‘ just a few weeks ago. The current celeb/WWE cross-fight comes in the form of TV’s Stephen Amell (‘Arrow‘) who responded to some rising remarks from superstar Stardust by attending a taping of ‘Raw‘ last week where he was attacked by the peacocking wrestler which ended with Amell and superstar Neville demanding of Triple H to allow them both to seek revenge and H finally relented and sanctioned a tag team match featuring Amell and Neville facing off against Stardust and King Barrett to take place at SummerSlam.

Stewart will bring the barbed zingers and with any luck, Rollins will not have forgotten his latest insult from the jokester and the four-hour show will have some extra entertainment thrown into the mix, don’t forget the one-hour pre-show, but the night culminates in a match between the legendary Undertaker and BR(cough, hack, gag)OCK Lesnar, who ended Taker’s undefeated streak at Wrestlemania last year and has an epic score to settle. I love wrestling, always have, but I’m wondering if four-hours plus the one-hour pre-show isn’t just a little too much of a good thing. They don’t have the roster to make an exciting four-hour event like they did say during the reign of DX or even after when Stone Cold and The Rock ruled the ring. I’m hoping Stewart makes this one worth watching the five hour event only on WWE Network.