San Diego Comic-Con is all I’ve been talking about the last week, and with good reason! The epic trailers, the cast surprises, the tidbits of info that have been, previously, safely guarded. This week gives us a fantastic peek into the next year or two of film and gets us stoked for those release dates. One of the most exciting bits of information came from Wolverine himself, Hugh Jackman. He gave us three words that sent fans everywhere into a frenzied sort of glee as to what ‘Wolverine 3‘ could entail, myself included, those words were “Old. Man. Logan.” Boom! 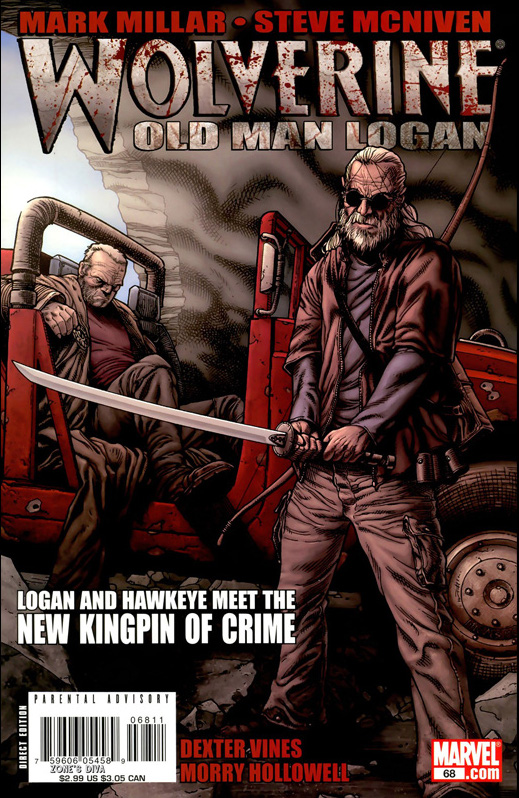 If you’re unaware of what Old Man Logan means, it’s cool, I’m gonna give you a bit of a primer here that will put you into the know next to, maybe not the most ardent of comic book readers, but the average readers for sure. Obviously – Spoilers.

First thing you need to know is that it’s set in an alternate universe named Earth-807128, and that it’s a fairly new story that ran from 2008 to 2009 but has had a new issue debuted during the ‘Secret Wars‘ story line and is set for an ongoing series to begin in October of this year. It’s an incredible concept for sure, so I can see why the desire is present to build on it, plus what better way to sell a comic book than for it to be part of an upcoming movie?

The story of Old Man Logan begins with the chilling paragraph “No one knows what happened on the night the heroes fell. All we know is that they disappeared and evil triumphed and the bad guys have been calling the shots ever since. What happened to Wolverine is the biggest mystery of them all. Some say they hurt him like no one ever hurt before. Others say he just grew tired of all the fighting and retired to a simpler life. Either way he hasn’t raised his voice or popped his claws in fifty years. His old friends would barely recognize him now.”  Automatically you’re wondering what the fuck actually happened?! How was Wolverine defeated?!

Wolverine is settled down with a wife and 2 kids in a barren portion of Northern California, now known as Hulkland. Logan is a broken, old man that is incapable of paying the rent due to the Hulks (an incestuous breed of Hulks coming from Bruce Banner and his cousin, She-Hulk). Even during a violent beating from the Hulks for not having the rent, Logan refuses to fight back in any form. 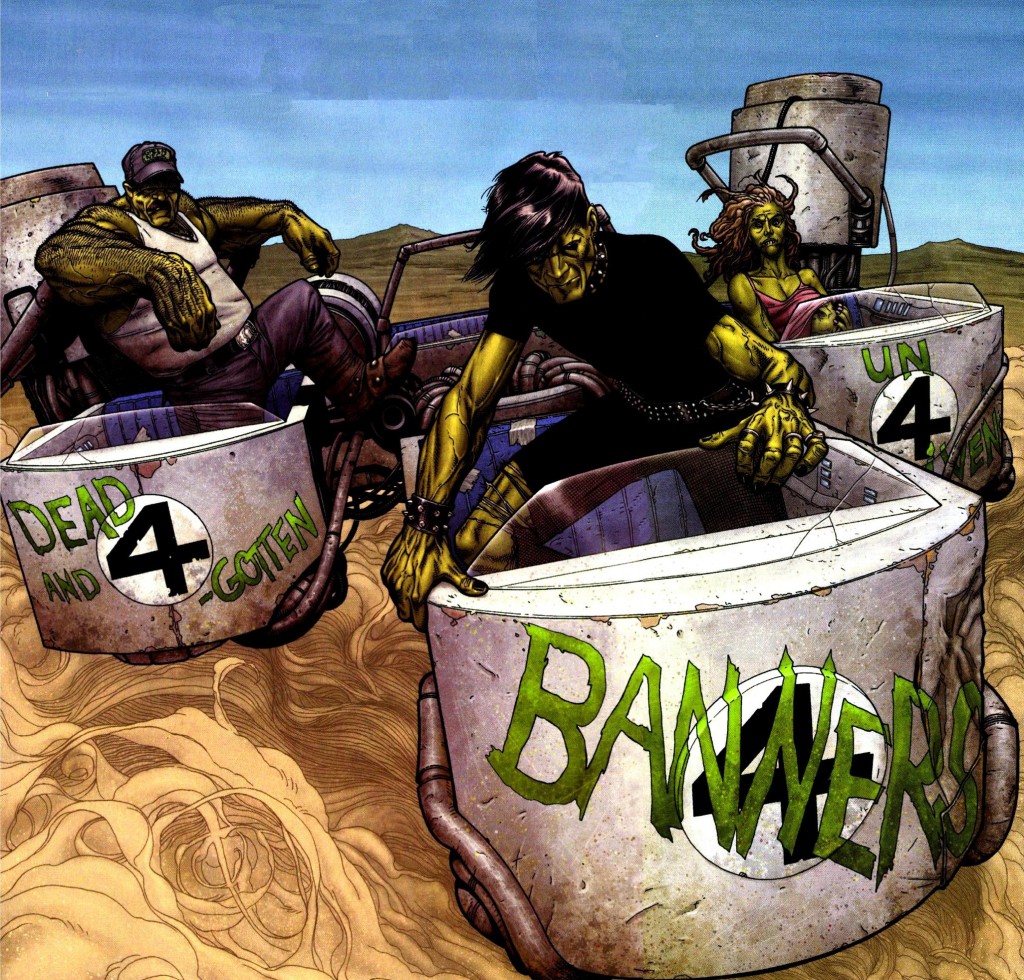 A blinded and elderly Hawkeye approaches Logan with a business proposition. In order to pay his rent, Logan agrees to escort Hawkeye across an America that has been claimed by super-villains to deliver a package. Logan leaves his family with Hawkeye in what was formerly the Spider-Mobile. When they are attacked, Logan takes the beating while Hawkeye kills them. En route to deliver his package to Red Skull who has named himself President, Hawkeye discovers disturbing news from his third wife (Spider-Man’s daughter) that their child is being held by Kingpin along with Daredevil and Punisher who are all being held for slaughter. Their rescue attempt is somewhat successful and they make their way back towards their initial destination. 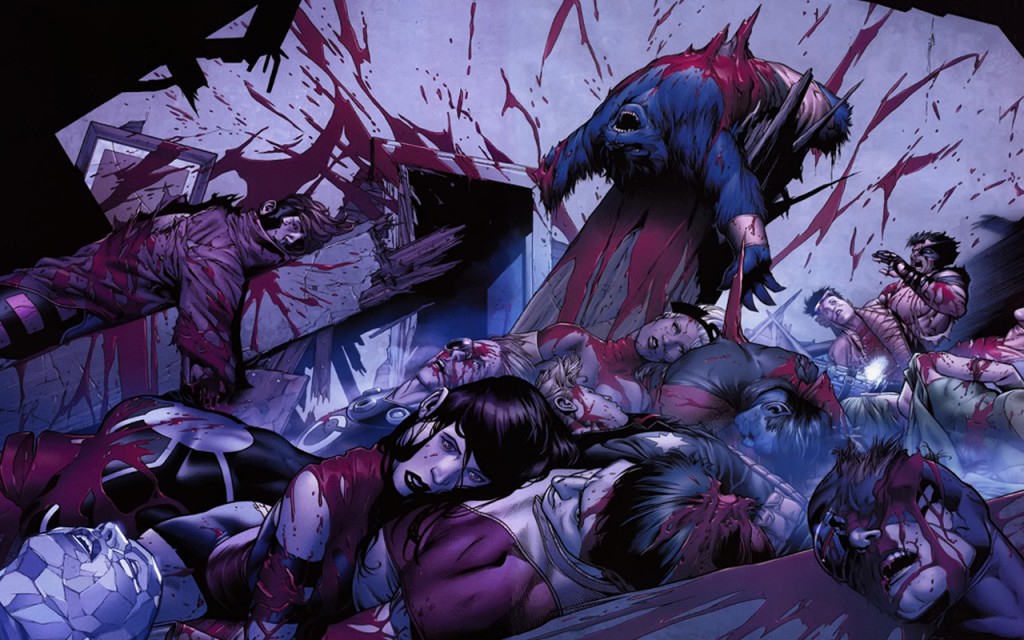 Logan has flashbacks to the night the heroes fell throughout their journey until he finally relents to Clint’s questions and tells him what happened and what drove him to bury his claws, forever. The horrible night in question began when a group of super villains invade the mansion. Wolverine is evacuating the younger students while the rest of the X-Men had mysteriously vanished. Eventually it comes down to Wolverine versus Bullseye, once Wolverine dispatches the baddie Mysterio appears and the illusion is swept away to reveal Bullseye was really Jubilee and Wolverine has slaughtered the X-Men. Mountains of grief land on Wolverine who runs into the wilderness and attempts to kill himself, the attempts fails but “Wolverine” is dead and Logan remains.

After achieving their task and taking the box to New Babylon, formerly New York City, Logan makes the journey back home. As he nears his place, he runs into a neighbor that tells him the Hulk Gang decided not to wait and murdered his family. As he looks over the devastation, his neighbor tells Logan he should bury their bodies, to which Logan replies “The name isn’t Logan, bub…It’s Wolverine” followed by the pop of his claws for the first time in 50 years. I get goosebumps writing this, aren’t you?! 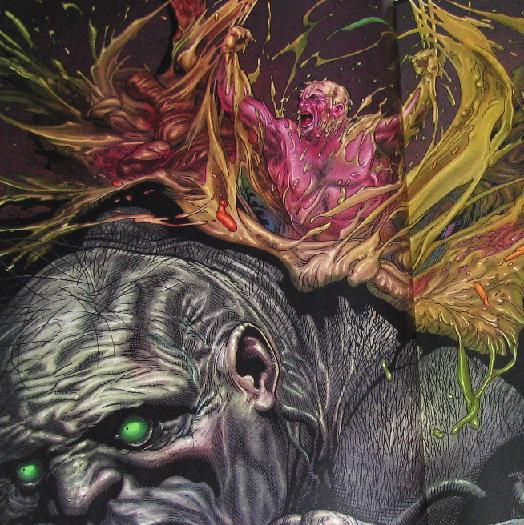 The newly re-minted Wolverine exacts his vengeance on the entire Hulk Gang until he’s down to Bruce Banner and the baby Hulk. The Hulk has been eating his opponents for ages and can’t understand the pain he’s feeling, he’s reminded of Wolverine’s healing power and Wolvering slashes his way out of The Hulk’s back, killing him.

In the following month funerals are held for Logan’s family and his neighbors attend, attempting to try to talk him out of leaving while he’s determined to bring down the other villains. He heads off to find the first baddie and Wolverine’s parting words are “Besides, I got a little partner to help me out an’there’s a nice poetic justice to Bruce Banner Junior bein’ the first guy on my new team.”