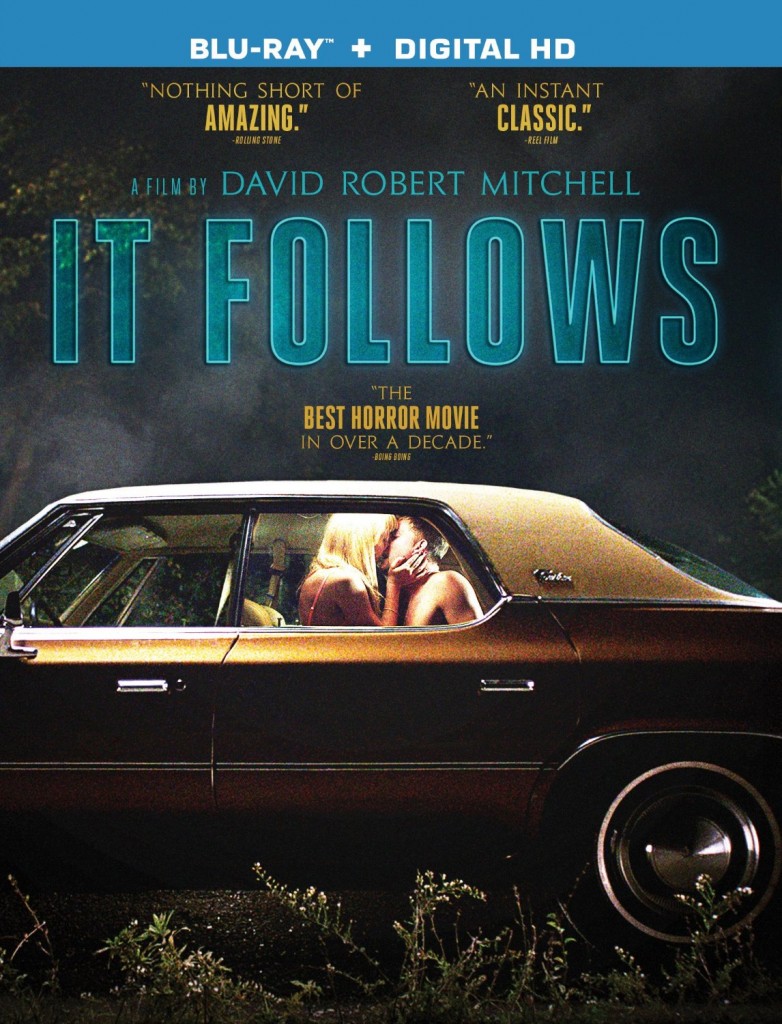 It’s very rare these days that a horror movie consistently delivers on genuine thrills and scares. And I’m not talking so much about the cheap “jump out and scare you tactics”. I’m talking about a deep psychological horror that lingers in your mind for days after, causing you to look over your shoulder and think twice about those strange noises you heard. Not since ‘The Babadook‘ has a movie been more terrifying than ‘It Follows‘, which is a horror film from newcomer David Robert Mitchell who wrote and directed this masterpiece of horror.

What works so well with ‘It Follows’ is its simplistic nature of the unknown. We never know why this terrifying situation is happening, but it is, and the characters have to deal with it, which makes it seem more realistic and grounded, considering there weren’t a lot of major visual effects. The title focuses on something that follows you. It could be someone you know or a complete stranger and it has one goal. It wants to kill you. How does one become so lucky to have something follow you? The answer is sex.

I thought Jason Vorhees from the ‘Friday the 13th‘ franchise was the leader in pre-marital sex murders. He might still be the poster boy, but ‘It Follows‘ is the new, fresh evil that awaits if you decide to go down that slippery, yet amazing slope. We follow a teenage girl named Jay (Maika Monroe from ‘The Guest‘) who is out on a date with a guy named Hugh. As they are in the movie theater, having a good time, Hugh notices a strange girl staring at him and walking towards him. Jay cannot see her.

Hugh quickly leaves with Jay, playing it off, saying he doesn’t feel well. The couple heads to an abandoned warehouse where the have sex. Directly after their intimate session, Jay wakes up tied to a chair where Hugh tells her she has the curse, which now she sees someone following her. Hugh gives her a few instructions on how to stay alive and then leaves. Now, Jay starts seeing a variety of scary looking people, following her day and night as this entity is trying to savagely murder her.

With the help of her friends and a young man named Paul (Keir Gilchrist from ‘United States of Tara‘), who has had a crush on Jay for years, the teens try to deal and run for their lives from this horror, while protecting Jay. David Robert Mitchell has given us a great set up for something that is truly scary. Each character has their own struggles and the dialogue between the circle of friends is the real thing. As the story progresses, so do the characters and their attempts to try and rid this evil from the world.

Almost every viable option is tested, even the opportunities that would have us not look at Jay in a positive light. But that’s the world of teenagers when it comes to sex, or at least that’s the way I remember those younger years. ‘It Follows‘ is an innovative and fresh addition to the horror genre. It’s creepiness and terror lasts for days after viewing, making you look behind you to see if anyone is indeed following you. 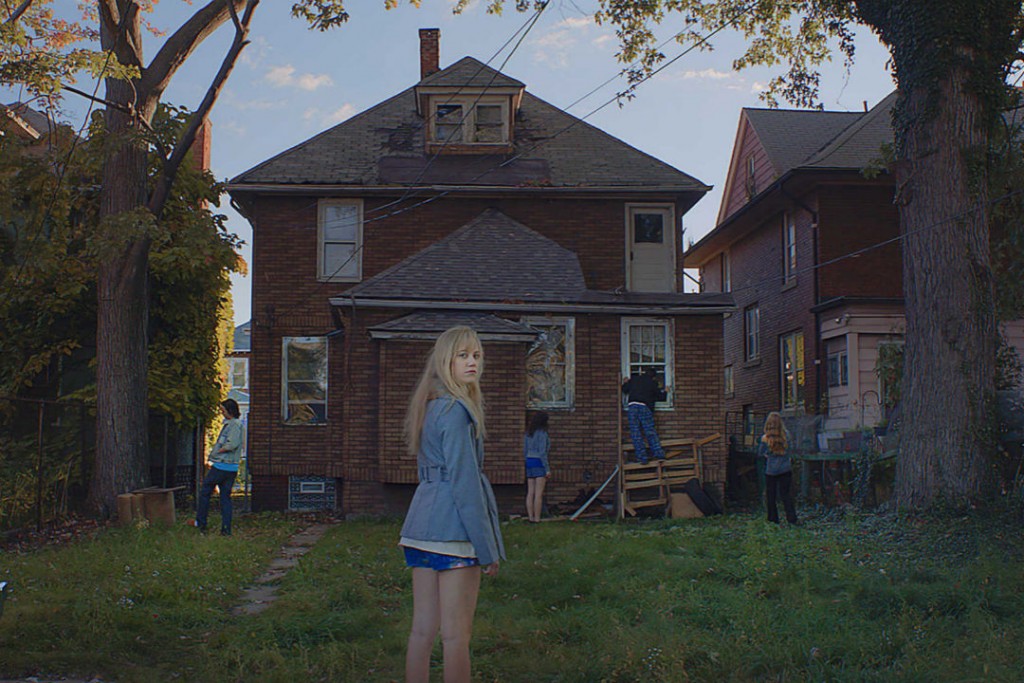 ‘It Follows‘ comes with an amazing 1080p HD transfer and is presented in 2.40:1 aspect ratio. This is one of those video presentations that is simply outstanding with zero flaws. From top to bottom, this video looks fantastic. The detail is always sharp and vivid throughout, revealing excellent closeups that show every wound, bead of sweat, individual hair, and fine stitch in the clothing.Wider shots never go soft or flat either, but rather give a great sense of depth to Detroit in all its horror and beauty. Colors simply pop off screen and very well-balanced and saturated. Nothing bleeds over and there is never any bad color correction. Black levels are always deep and inky and the skin tones are always natural. There were zero instances of any nasty banding, aliasing, or video noise, leaving this video presentation with top marks.

The audio portion of this release comes with a fantastic lossless DTS-HD MA 5.1 audio mix. Good god, it doesn’t get any better than this for a small horror film. Everything just sounds amazing. This is one of those fully immersive audio tracks that will make you look behind you in the dark room and behind the couch. The sound effects are lively, robust and very realistic. There is some great directionality to them as well at all times. each sound is nuanced and layered to give the best possible sound. The ambient noises of nature and city sounds are fantastic and come through the rear speakers often and very nicely. The bigger sounds come from the storms and few gunshots in the movie, which all pack a powerful and startling punch. Then there comes the amazing score by Disasterpeace, which hits all of the right notes. It’s haunting, vintage, and just wonderful. The highs and lows are incredible and the bass has a great rumble to it. The dialogue is always crystal clear and easy to follow, and free of any pops, cracks, hiss, or high shrills. Needless to say, this audio presentation is excellent. 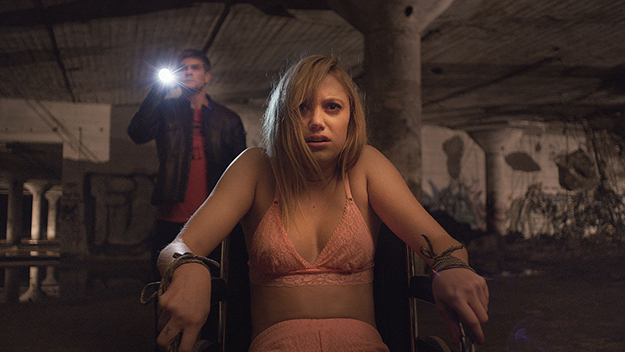 Audio Commentary – Perhaps the best extra here is the commentary with fellow film critics. There are no commentaries or extras with any of the actors,writers, or director here, but we have a highly entertaining bonus feature with some of the best critics working today. This one in particular is hosted by Scott Weinberg, and has Eric D. Snider, Britt Hayes, Samuel D. Zimmerman, Alison Nastasi, and Eric Vespe call in during the film to discuss the movie. Scott and his pals gives us some insights to the characters, the message, the tone, and the direction throughout. It’s very informative and makes you look at the film in many different ways. It’s also quite hilarious as well to hear these old friends joke with each other. This has quickly become one of my favorite commentary tracks, and I hope in the future I can be part of one.

Conversation with Film Composer Disasterpeace (HD, 5 Mins.) – The movie’s composer discusses his career, how he got the job to score this film, and the creative elements he chose to use.

Poster Art Gallery (HD) – Here are a few different designs by different artists for the film’s poster. Some are cool. Some are lame.

‘It Follows‘ is one of the best horror film, and hell, one of the best overall movies in a long while. Very rarely does a movie like this come along and succeed in every aspect of filmmaking. The performances by the actors are excellent, the story is creepy as hell, the sore is fantastic, and everything else in between is well…good. The video and audio presentations are both top notch, and while there aren’t a ton of good extras here, the audio commentary is one of the better ones I’ve heard in a long time. Do yourselves a favor. Pick this movie up as fast as you can. You’ll be very satisfied to add ‘It Follows’ to your movie collection.