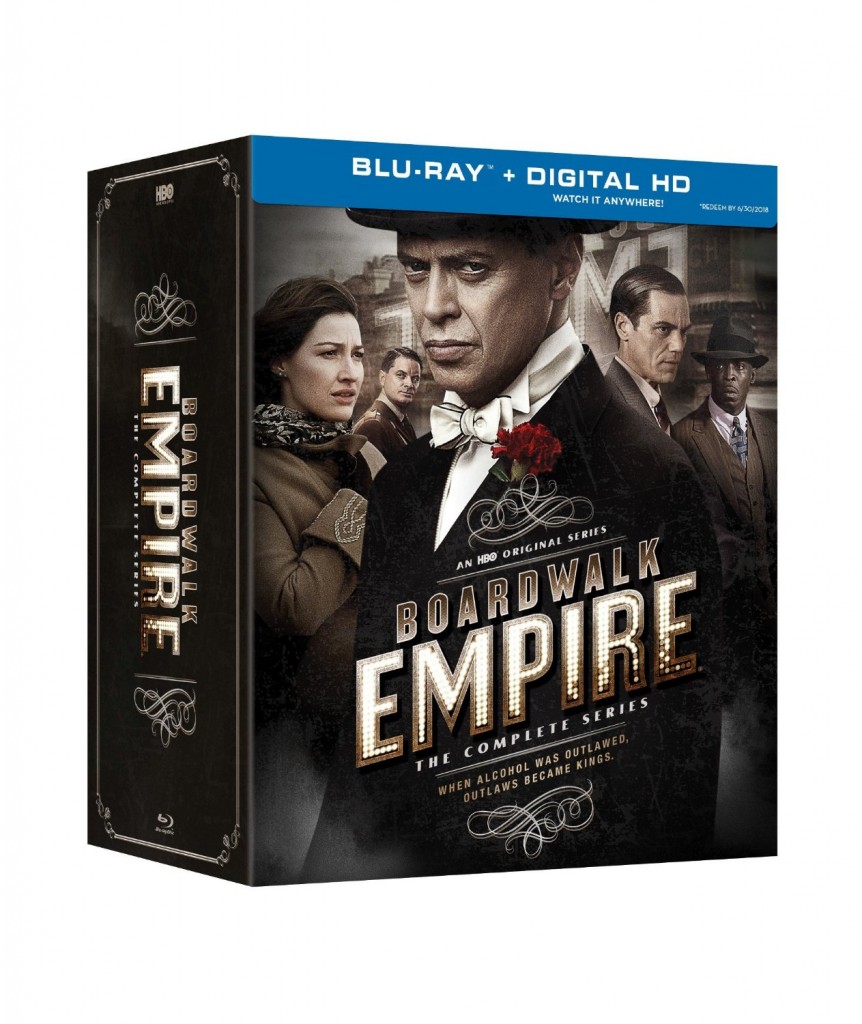 I remember when the pilot episode for ‘Boardwalk Empire‘ aired on HBO back in 2010, which was directed by Martin Scorsese. After the episode aired, I said to my friends, “that was one of the best pilots to any television show I had ever seen.” They all seemed to agree. What followed was five season of some of the best storytelling set in the prohibition era of America, complete with historical figures and gangsters. It was almost like it was ‘Goodfellas‘, but set in the early 1920s. The series followed Nucky Thompson (Steve Buscemi), who was based on a real guy, who secretly controlled the Boardwalk in Atlantic City and bribed politicians and presidents to make his rise to power much easier.

He had a ton of help from his brother, and a few allies, including Chalky White (Michael K. Williams). Even a young Al Capone is a big part of the series. The series writers were perfect in their craft in penning great storylines for each character, including all of the melodrama between Nucky’s relationship with his family, brother, wife, and even enemies. Almost each episode had a brutal murder where someone got whacked, so nobody was really safe for long. Meanwhile, through the entire series, a prohibition agent (Michael Shannon), tried to take Nucky and his cronies down every chance he got, but time has a way of changing people for the worst.

It was great to see the prohibition agent’s descent into something more villainous over the course of time, due to his irrational decisions. But what makes ‘Boardwalk Empire‘ so great is that the creators and writer’s ability to make us sympathize with these harsh criminals. Much like ‘Goodfellas‘ and ‘Casino‘, we see their home lives with their families and some good and genuine moments with them, which makes us relate in a certain way on a basic human level.

However, just like clockwork, these people turn on a dime and kill others. It makes for fascinating storylines and excellent television. In the final season of the show, the writers and producers gave us flashbacks to Nucky’s childhood, all the way to how he rose to power, throughout the entire season. It was a powerful story arc to see what made Nucky really tick.

There was never a dull moment in the show, as we grew with each character whether they took the good or bad path. Even the old timey music in the series is amazing, and I wish HBO would release some of the soundtracks on vinyl. That being said, ‘Boardwalk Empire‘ still holds its top spot as one of the best tv series about the prohibition era and gangsters. 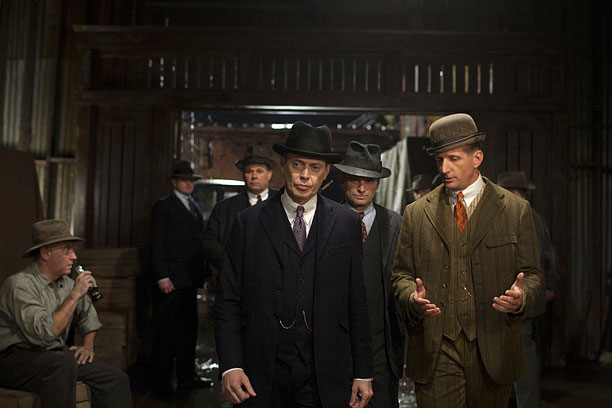 HBO has done an amazing  job with the complete series of ‘Boardwalk Empire‘ as far as the audio and video presentations are concerned. This Blu-ray has a 1080p HD transfer and is presented in 1.78:1 aspect ratio. There are a few instances throughout of some crush, but that’s because of how the show was filmed, giving the time period to make it look more authentic. That being said, the show and image still looks great, but it was noticeable, specifically in the darker scenes. The detail is very vivid and crystal clear throughout, with the exception of the darker scenes, which causes the detail to go on the softer side. But closeups reveal very fine textures in the period costumes where every stitch is seen, and every wrinkle, individual hair, makeup blemish, wound, and makeup effect shows up nicely. Colors are lovely with the intentional muting to give that raw and gritty look. Skin tones are natural here as well. There was some very minor aliasing and banding, but it’s nothing to write home about, leaving this video presentation with excellent marks.

This release comes with an impressive lossless DTS-HD 5.1 MA mix and is what every show and film should strive to sound like. The sound effects are full, robust, and lively on a consistent basis. Each sound effect and ambient noise whether it be a loud gun shot, music in the background at a club, people walking in the streets, or people chattering, the sound design is flawless, perfectly balanced and layered. The surrounds pack a powerful punch with excellent directionality at every turn. This audio presentation really does immerse you into this time period. The score and music sound phenomenal here as well and never drowns out any of the dialogue or sound effects. Speaking of the dialogue, it comes in crystal clear and is very easy to follow at all times with zero instances of any pops, cracks, shrills, or hiss. The LFE is excellent and the dynamic range is very wide. Bass kicks into high gear during the heavier action scenes without a rocky rumble. HBO knocked this audio presentation out of the park for sure.

In addition to the many extras of each season of ‘Boardwalk Empire‘, HBO has given us a treasure trove of new and exclusive to this set bonus features, which are detailed below.

The Final Shot: A Farewell to ‘Boardwalk Empire’ (HD, 30 Mins.) – What a fantastic extra. I only wish it was longer. Here we have Martin Scorsese, Terrence Winter, Steve Buscemi, and most of the other cast, discussing the inception of the show from the beginning, through each season. They talk about characters, casting, the themes, and their favorite aspects and scenes of the series. A must watch.

Anatomy of a Hit (HD, 9 Mins.) – Here has the series producers and directors talking more or less about how violent the show was, while discussing a few select scenes.

Building the Boardwalk (HD, 5 Mins.) – The technical directors of the show talk about actually building the 1920’s Boardwalk as well as using the CG effects to create the time period. Very cool stuff here.

Shooting the Series (HD, 6 Mins.) – Even more of the crew, including the director of photography discuss the overall look and tone of the show visually speaking. They talk about how they used old photos from the time period to make the sets, as well as talking about the use of lighting and blocking a scene with the actors to get the most use of their sets.

Designing the Series (HD, 5 Mins.) – This is more or less an extension of the above extra with more of the crew talking about how they achieved the look of the show and what research they did to get the authentic look.

Visual Effects (HD, 9 Mins.) – The visual effects team discuss how they used the CG effects in real shots and made it seamless so that nobody would ever know there was CG used. Needless to say, they did a fantastic job.

Now in addition to the above bonus features, there are 28 audio commentaries throughout the series you can listen to, featuring the cast and crew of the show. There are 13 different Picture in picture commentaries as well. There are also an abundance of more than four hours of behind the scenes featurettes. Fantastic, I say. 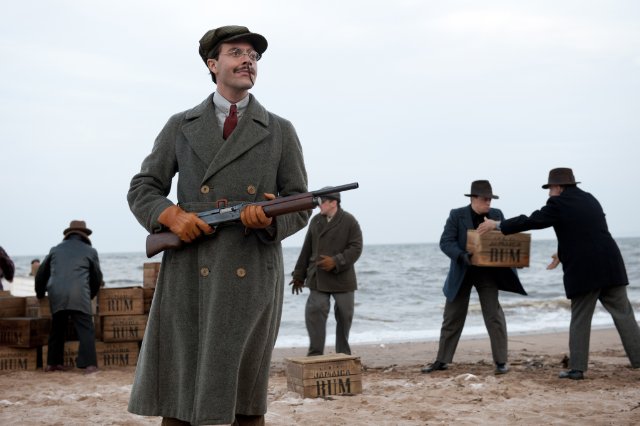 HBO has knocked this box set out of the park. I’ll let the series alone speak for itself. I mean, when you have the A-List talent like it did on each episode, you know you’re getting something quite incredible. Nucky along with many other characters in the show have become iconic. The video and audio presentations are all excellent and all the extras from the previous individual seasons have been imported over. In addition to that, there are several amazing long bonus features, all of which are worth watching. My advice on this one is to run to the nearest store or immediately purchase this set online. You’ll be totally satisfied.